Facebook’s platform has allowed thousands of companies to get a piece of the “social media” pie where a Facebook fan is said to be worth $8 and the value of having a fan share your company’s content on Facebook is worth $14. A “fan goal” looms over any business present on Facebook. Having more fans not only improves your company’s “social status,” it increases the interactions on your Page and the chance of those fans sharing your content. Hands down, the most common question we get is “How do we increase our Facebook fans?” There are a million and a half ways to do this, but we’ve come up with a few specific methods that generate lots of quality fans without breaking the bank.

Below are a few specific examples from one of the Facebook pages that we manage. However, there is only so much that businesses can do to drive fan numbers on Facebook. The usual Facebook Ad campaigns, although important for growing Facebook awareness, may sometimes seem stale.

Companies and marketers across the globe struggle to gain a solid ROI from Facebook Ads. According to Webtrends, an average Facebook ad click is now up to $1.07. That is $1.07 per fan, which Mashable.com reports, was an increase of 40% for 2011.

We recently launched a Facebook initiative where every new fan for our client’s Facebook Page turns into a donated $.10 to a national non-profit organization. We chose an organization that had a great following, a nationally recognized name and the same values as our client’s company – and voila! The results have been outstanding! 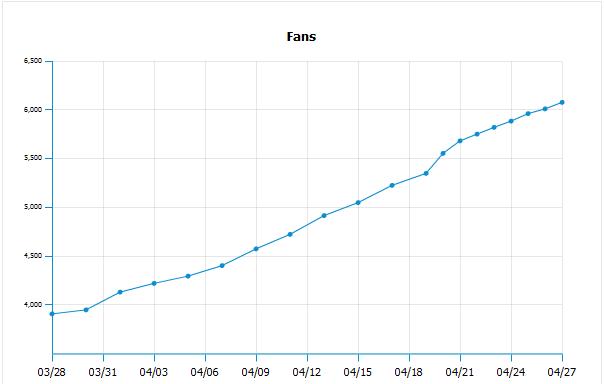 Let’s say, based on the current rate, we gain 25,000 fans in six months. The organization will receive a check for $2,500 and, at only $0.10 cents per fan, our client will have a fan base of people who share their values and who will build an active online community with each other. Everybody wins!

Acquiring fans for $0.10 is a lot more cost effective than Facebook Ads. This non-profit outreach lessens the reliance on ads and allows Page managers to utilize the social channel itself to gain fans.

Admittedly, a Facebook ad campaign is running for this Page as well. While Facebook Ads might not be the most cost effective promotion tactic, you can’t just ignore them either!

Currently, one ad is running to complement the promotion and it has contributed 661 fans in the 23 days. The most effective ads include the Like button directly on the ad, which allows users to like your Page without stopping what they are doing on Facebook. Effective ads also include a call to action, most commonly including a line that states “Like this Page” or “Like us on Facebook” to encourage users to click the Like button.

A very important part of the campaign’s landing page is the ability for users to share the idea on their own Facebook wall to let their friends know about this easy way to raise money for a cause.

A number of people have shared the page with friends and, in turn, increased our client’s social reach. Similarly, there is an option on the landing page to “Tell your friends” which opens a window showing all of a user’s Facebook friends which sends a private message for them to like the Page on a more individual basis. Nothing is more powerful in social media than recommendations and suggestions by people you trust.

Having direct and clear social calls-to-action on the page provides a simple way for users to get involved and engage in a cause that they are passionate about. Regardless of industry, there are passionate people willing to share your brand’s message online. You just need to find a way to capture and engage with that passion through your social media campaign.

The crux of this promotion tactic is simple: like the Facebook page and the company will donate $.10 per new fan to a related non-profit organization.

It has worked to increase fans in a cost effective way while also promoting the brand to a new audience of people. Non-profit promotion through social media leverages passion and naturally encourages users to share with their friends. It also helps build a community of like-minded and caring people that will become brand advocates and fuel a successful social media campaign for a long time.