Ad blockers are more popular than ever. Nearly 200 million users had some kind of ad blocking software installed in June 2015, and that number will probably grow by double digits in 2017.

For Internet users who are sick of ads, this is great.

They don’t have to look at intrusive popups or sit through unskippable commercials before their favorite YouTube videos. For businesses, this sounds like a problem. If people don’t see your ads, how can you get new customers?

But in reality, the issue of ad blockers is far more complex than that. Surprisingly, it’s also far less catastrophic. They key is to stop looking at ad blockers as a challenge and start looking at them as opportunities.

Let’s talk about why.

Here’s the bottom line: People are sick of ads. All forms of free media have used ads for hundreds of years. Newspapers, magazines, television, radio, the Internet, and even public transportation — they’re all fueled by ad dollars.

Plus, keep in mind that the average person shops multiple times per week, even if it’s just for groceries. If you count brand mentions, online links, email, packaging, flyers, junk mail, and sales promotions as forms of advertising, then the average American sees thousands of ads each day. Literally.

In 2007, the New York Times reported on a study by Yankelovich which found that the average city-dweller sees about 5000 ads per day. To make matters worse, roughly 50% of the people who participated in the study agreed that advertising was out of control. To put that in perspective, the average American speaks about 16,000 words per day.

That means someone sees an ad for every three words they speak. Every “I love you,” “how’s it going,” “what’s the weather?” — there’s an ad. So it’s no wonder why consumers want ad blockers.

Advertising has inundated people’s lives. If you believe Yankelovich’s study, then about half of your audience online doesn’t want to hear from you in the form of paid ads. It’s also worth noting that US ad spend has increased by 71% since 2011, so you can be sure there are more ads out there today than there were in 2007. The takeaway from this is it’s less effective to engage your audience. Adapt to your customer. Show them that you understand their preferences and approach them in a more helpful way.

Seize this opportunity to improve yourself and your business. Innovate, compete, and get better.

The core of the argument against ad blockers is that they reduce the number of impressions per ad. Considering lots of advertising outlets count blocked ads as impressions, businesses lose money every time someone blocks an ad. That sounds like a rough deal.

But the fact of the matter is that those users probably wouldn’t click on your ad anyway. Why? Because they don’t want to see ads.

Essentially, these people don’t want an ad — they want an experience, and they view ads as obstacles to that experience. They download ad blockers to remove those obstacles so they can enjoy their time online. So let’s assume that from an ad blocker user’s perspective, they don’t want to see any form of paid promotion.

As marketers, how can we still reach those users? That question is the foundation of our next point.

On the surface, ad blockers sound like marketing nightmares. But at their core, they’re industry challenges that give marketers the chance to innovate and adapt. Uber disrupted the transportation industry.

They’re a new idea forcing a change in the industry. Whenever this happens in an industry, you have two options:

Some sites are fighting the change. Forbes doesn’t let ad blocker users into their site unless they add Forbes to their white list. 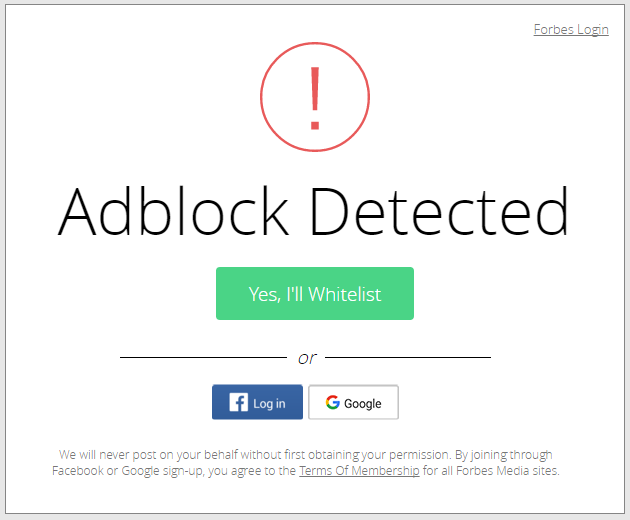 Considering the huge number of ads that Forbes has on each page, this isn’t a surprise — they want every user to generate money.

But in the long-term, this idea probably isn’t sustainable. Why? Because it directly opposes what today’s Internet users want.

Considering the increase in the use of ad blockers over the past few years, it may wind up hurting Forbes in the long run. But some people are adapting to the change. The best example of this is Gary Vaynerchuk.

Vaynerchuk points out that advertising is just one form of business monetization. There are other avenues you can use, like speaking engagements, venture capital, search engine optimization, and a lot more. That’s the beautiful part about the Internet, after all — you have so many options to earn money for your business.

Online advertising is one of the most popular options. But it’s nowhere near the only one. And if that doesn’t convince you that innovation is the right way to go, consider the words of legendary General Electric CEO Jack Welch:

“Change before you have to.”

In the time he served as its head (1981-2001), he increased revenue from $26.8 billion to more than $130 billion, eventually making it the most valuable and largest company in the world. It’s safe to say that if anyone understands the importance of change in business, it’s the man who led one of the world’s most successful companies through the go-go 80s and into the 21st Century.

Ad blockers remove unqualified traffic, and they present a golden opportunity for industry change. Quality is the key to success in all of this. We’re not beating ad blockers any time soon.

So instead of focusing on getting around them, let’s focus on providing Internet users with something they want in a format they enjoy. Let’s say your entire paid advertising budget is now free. How else could you spend that money so you don’t lose out on customers?

You have a few obvious choices:

SEO is the clearest choice because targeting keywords naturally reflects customer intent. In other words, if people want your services, they’ll find you in Google search results. Content marketing is another great choice since it lets you provide a great user experience.

Videos are excellent for that purpose, and audio content like podcasts has the advantages of portability. Infographics work well too, since they visualize complex data and help people understand important topics. Last, social media marketing is an investment of time more than anything else.

Interact with your followers, build trust and relationships, and promote your content to the people who are most interested in it. That relationship-building will provide a more reliable repeat customer or long-term client than any text-only ad could provide. You also have a few less conventional options for where to spend your paid ad budget:

Outreach is the process of sending your best content to relevant influencers or bloggers and getting them to link back to your site. That link gives your site more credibility in search engines, and it also guides traffic directly to you from a popular website. Tool development is the process of coding interactive elements on your site that help visitors solve a problem.

Calculators are one of the most popular tools, but you can also create tools specific to your industry, or even something as simple as a template. Are any of these easy to do well? No.

But that’s why they’re so important. Online consumers are sick of identical ads that promise value propositions over and over again. Give them something they want and promote in a way that brings them to you instead of interrupting their experiences somewhere else.

Essentially, if you use inbound marketing, ad blockers will mean virtually nothing.

What do you think about ad blockers?

Are you concerned about ad blockers? Do you think you’ve lost business to them?