By Trevin Shirey  ~ 4 minutes to read
Trevin is the VP of Business Development at WebFX. He has worked on over 450 marketing campaigns and has been building websites for over 20 years. His work has been featured by Search Engine Land, USA Today, Fast Company and Inc.

It’s almost Amazon Prime Day! In case you haven’t heard, Amazon is celebrating its 20th anniversary with a one-day shopping event that claims to have more deals than Black Friday. The sale is limited to Prime members, and includes deals on electronics, toys, video games, movies, clothing, and many other popular items. With 244 million active users, Amazon is by far the largest online retailer in the world.

But how does it stack up against brick-and-mortar retail giants? In honor of Prime Day, we’ve created an infographic comparing Walmart vs. Amazon: the ecommerce giant against the world’s largest retailer. Keep reading to learn more about the battle of Amazon vs. Walmart — and check out our online marketplace guide to start selling online!

Bonus Reading: Should You Sell On Walmart or Target?

Walmart vs. Amazon: the results

Although Walmart has been around for 32 years longer than Amazon (which was founded in 1994 & launched a year later), has 14 times as many employees, and its net sales were over five times that of the online retail store, Amazon’s astounding 20% year-over-year growth indicates that it’s a strong competitor. And considering that it adds approximately 75,000 products per day to its 250 million offerings, that growth shows no signs of stopping. That being said, Amazon knows it needs to keep improving if it wants to remain at the top of the ecommerce world.

In fact, there’s already been speculation that Prime Day itself is a preemptive strike against upcoming competitor Jet.com. And considering that Walmart is now expanding its ecommerce store, things could get even more interesting when it comes to Amazon vs. Walmart.

While Walmart does have an ecommerce site (and has since 2000), their sales are less than one-sixth of Amazon’s. Though their prices are similar, they lack some of the member benefits that Amazon offers its Prime users. Free 2-day shipping, streaming TV shows and movies, and the Kindle lending library are nice perks, and for $99/year, about 40 million Prime subscribers currently use the service.

It makes sense, then, that Walmart started testing their own unlimited shipping service in May. It doesn’t have any of the other benefits that Prime includes, but at $50 a year, it’s barely over half the price.

What’s next for Amazon vs. Walmart?

It’s difficult to directly compare the two retailers, since one operates entirely online and generates most of its revenue through books and electronics, and the other operates in physical locations around the world and sells primarily groceries. However, the 2015 holiday season should be an interesting time for the battle of Amazon vs. Walmart. The fact that Amazon sold 16 million products on Cyber Monday in 2014 is impressive, but doesn’t quite rival the 22 million shoppers Walmart had on Black Friday. But considering that 60% of Amazon’s customers placed orders on a mobile device, and mobile usage only continues to grow, the convenience of shopping from home – or at work, school, the gym or anywhere else customers have their phones – may ultimately win out.

So what do you think – will Amazon eventually overtake the world’s largest retailer? Will Walmart’s ecommerce store take off and leave them in the dust? Who will win, Walmart vs. Amazon? Let us know in the comments below!

Embed this infographic on your site:

The first step to increasing your SMB’s Amazon sales is getting a FREE proposal.

One of our experts will be in touch within 24 hours! 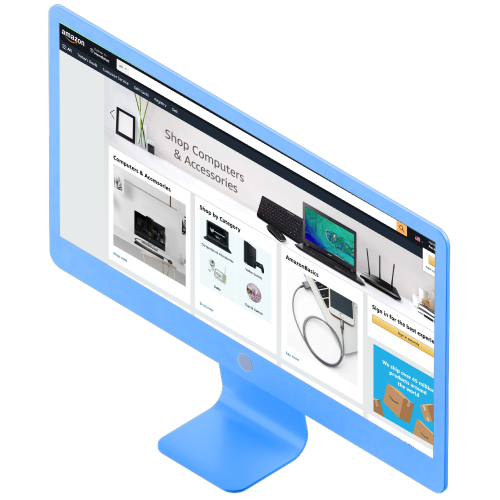