One Month Later: How Important Was Mobilegeddon to Your Industry?

By Trevin Shirey  ~ 7 minutes to read
Trevin is the VP of Business Development at WebFX. He has worked on over 450 marketing campaigns and has been building websites for over 20 years. His work has been featured by Search Engine Land, USA Today, Fast Company and Inc.

Today marks one month from “Mobilegeddon,” and Google’s mobile-friendly algorithm is in full swing. This means that it’s now more important than ever to have a website that’s accessible across multiple platforms and devices – or is it? A lot of people who were expecting something dramatic are now asking, “What did Mobilegeddon actually do?

I didn’t see any changes.” At WebFX, our response to questions regarding the impact of mobile-friendliness is typical that it varies by industry. But now that these questions are becoming increasingly frequent, we wanted some data to back us up. In order to find it, we did a little research of our own on which industries are the most (and least) mobile-friendly.

But before we jump into that data, let’s look at the effects of Mobilegeddon so far.

Many site owners didn’t see any changes in ranking or traffic after the mobile update went live, leading them to believe that Google’s announcement was nothing more than hype. However, there were a few major sites that prove that isn’t the case at all. Sites like GQ and The Washington Times saw increased mobile visibility as well as higher rankings in mobile search (compared to desktop results) within days, while sites like Upworthy and NBC Sports saw the exact opposite.

According to data compiled by Searchmetrics, here are a few of the “winners” after the update: 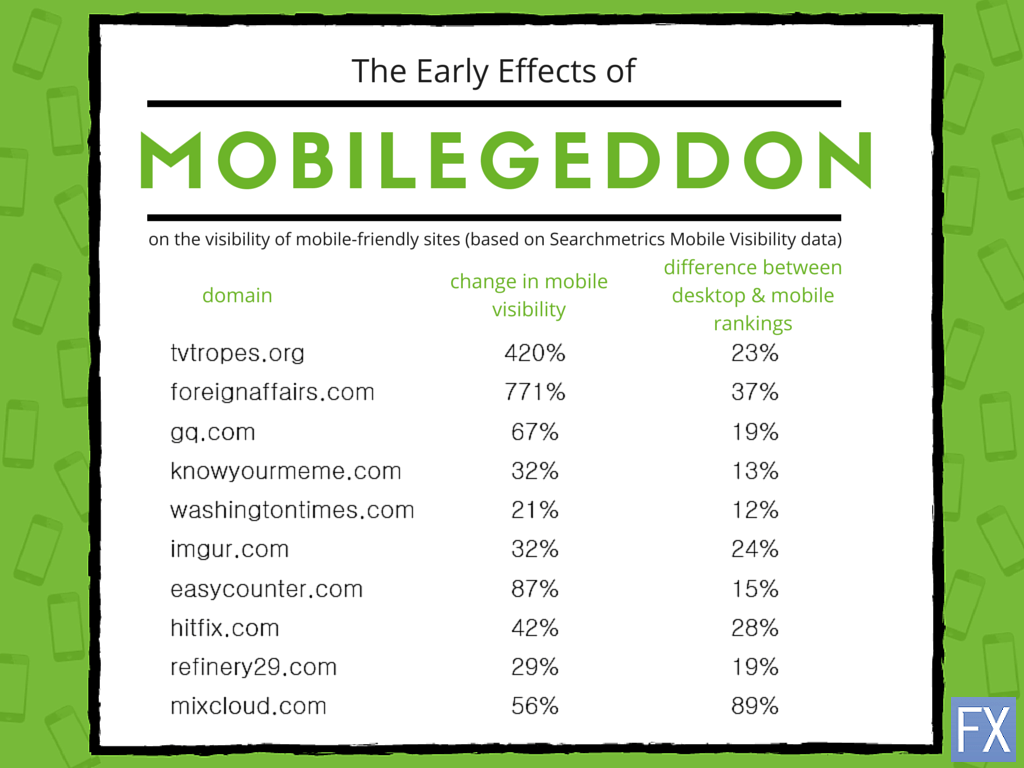 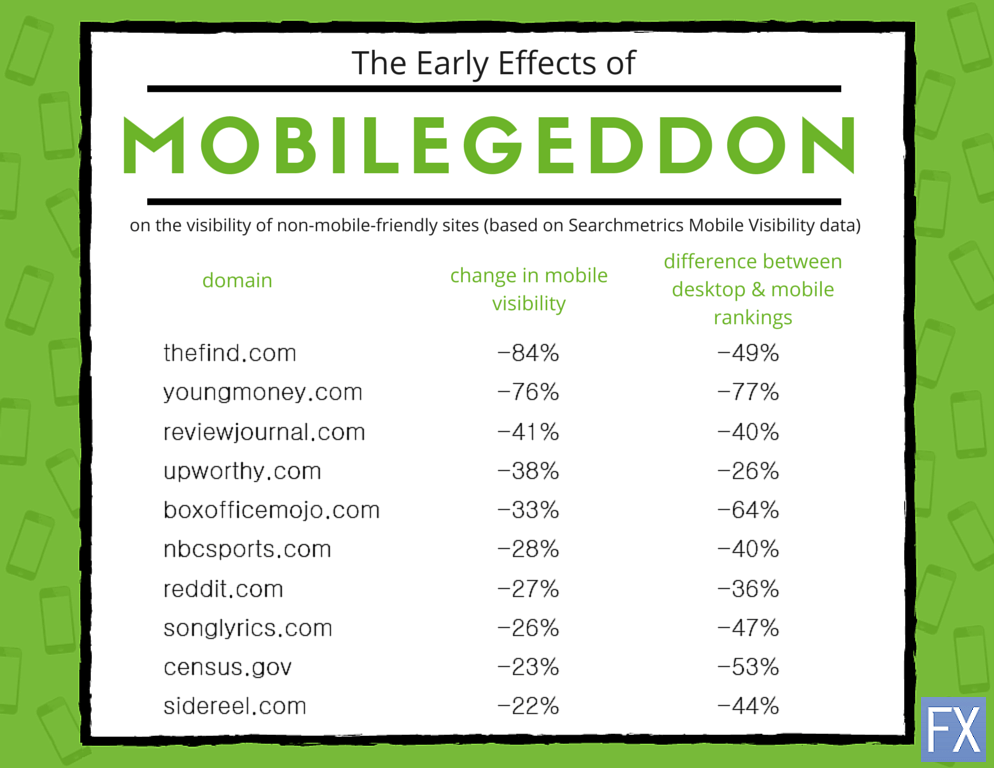 As you can see, Google’s mobile algorithm update was a game changer for quite a few big names. Foreign Affairs positively cleaned up with an astounding 771% increase in traffic, probably because the site’s design is specifically intended for mobile phones.

On the other hand, some of the biggest losers of Mobilegeddon are interesting. TheFind, Upworthy, NBC, and Reddit are all immensely popular, and it’s surprising that these well-known sites lost so much visibility from one update. With that behind us, let’s move into our study.

Which industries are the most mobile-friendly?

As an agency, we’ve seen firsthand that some industries make mobile-friendliness a priority, while others don’t.

Because of this, we had a couple of expectations off the cuff – namely that ecommerce and news/media sites would be the most compliant, and all of the others would be way behind. In order to test this theory, we pulled data from the industry business category listings on Alexa and found the 100 most popular sites in each category. From there, we tested the sites in bulk using Google’s own Mobile-Friendly Test tool, which gave us a true or false answer to whether each site was responsive or not.

It’s important to note that 100 websites from each industry is not a reliable sample population for a definitive study, so our results may not match up with those from large-scale data mining. We just wanted an idea of which industry worked the best. After sorting through more than 4,000 sites, we organized our data and examined the results.

To say it lightly, we were surprised by the results. Let’s take a look at the top 10 most mobile-friendly industries: 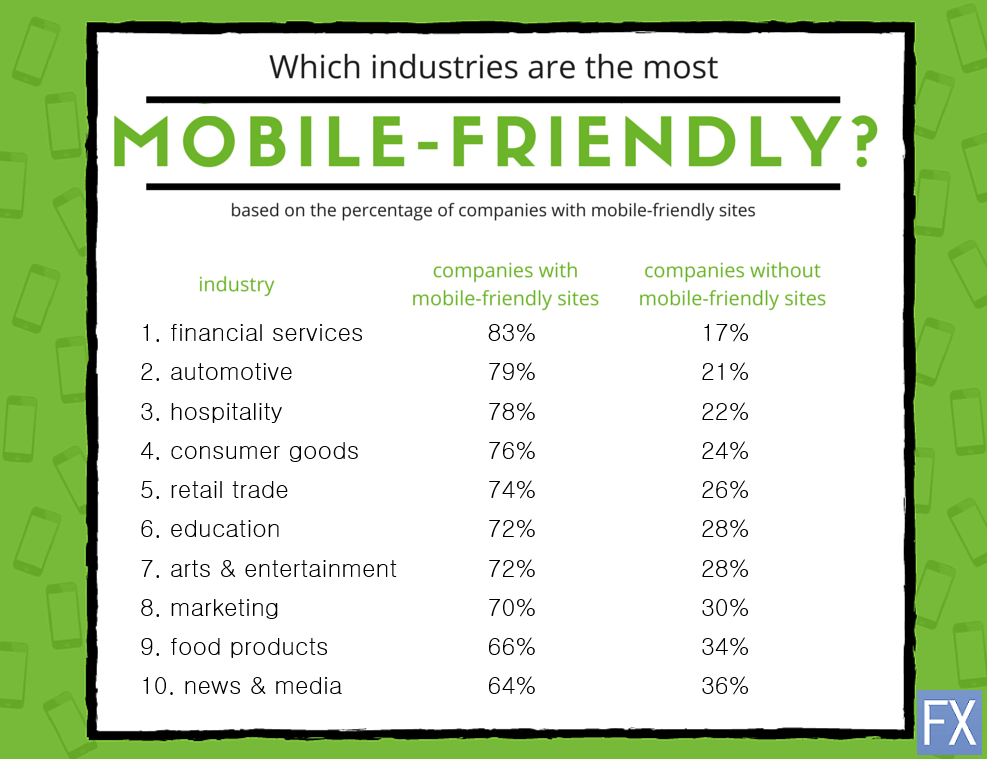 Financial services was the most mobile-friendly industry, with 83% of the sites we tested being mobile-friendly. Next in line were the automotive and hospitality industries with 79% and 78%, respectively. 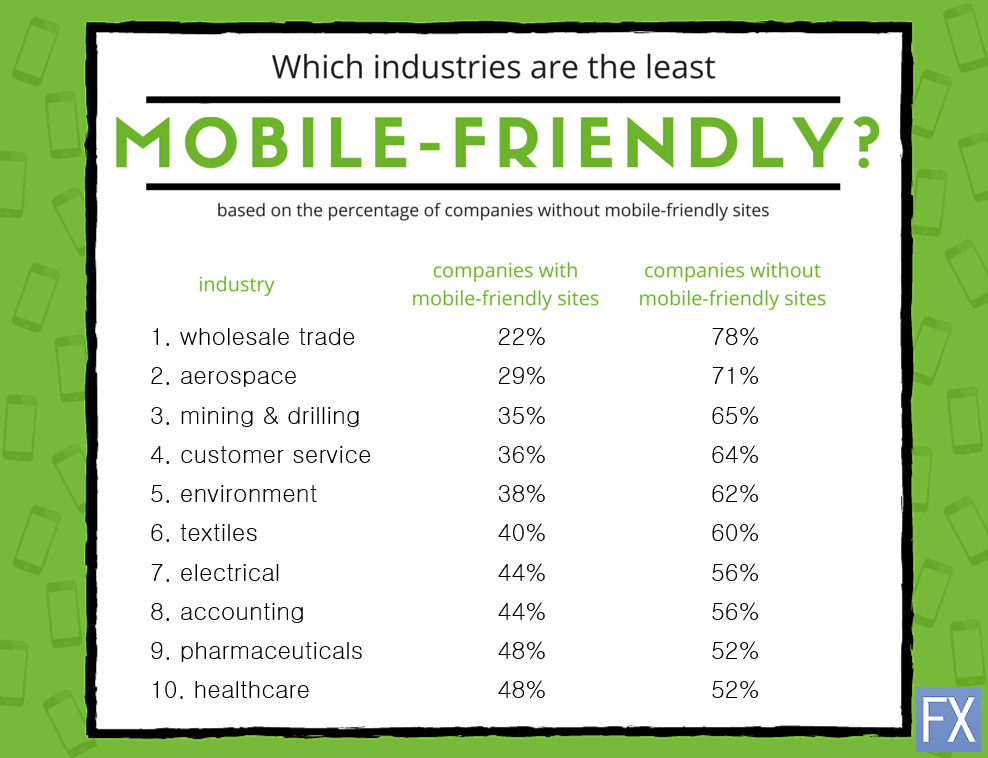 At the other end of the spectrum, wholesale trade came in dead last with 22% compatibility. Just above were aerospace and international business with 29% and 32%, respectively.

That’s a massive spread from first to last, but the most interesting part of this comparison was that there’s still clearly room to grow for every industry out there. There are a lot of sites everywhere that aren’t taking advantage of the mobile-friendly ranking factors.

In addition to our data, we kept in mind that not every industry takes the same approach to marketing. And unfortunately, some of them might just be behind the times.

It makes sense that some of the more heavy-duty, niche, and equipment-based properties don’t have responsive designs yet, because they just don’t do a lot of business over the Internet. Businesses involved with mining and drilling are a little behind the times since, by nature, they’re not the fluid kind of industries that need to keep on the cutting edge of SEO.

Looking for an all-in-one SEO audit tool? You’ve found it.

SEO Checker provides data on key metrics to give you: 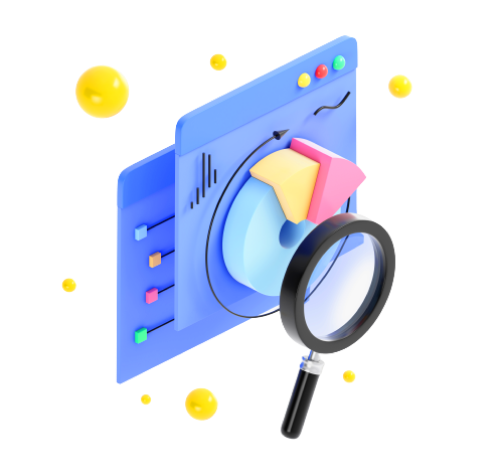 There are still a few things we want to know.

Like any good set of data, the answers to our original question eventually led to more questions. Coincidentally, all of them begin with “Why.”

In general, why are these numbers so low? Keep in mind that the websites we polled all came from Alexa’s top 100 websites in their respective categories, meaning there are a lot of big-name businesses out there without mobile-friendly sites.

For example, the News & Media category only has 64% compliance, and these guys go head-to-head with Bloomberg, CNN, and the New York Times.

Second, why is ecommerce only 61% compliant? This industry houses all of the big-name companies that thrive on innovative UIs and sleek site designs. Shouldn’t it be high on the list?

On our rankings list, ecommerce clocks in at #17 behind business services but just beating forestry. Forestry? Really? Ecommerce should be the trendsetter for this scenario considering nearly half of its traffic came from smartphones and tablets in 2014.

Only 23.1% of ecommerce sales go through mobile devices, which is dwarfed by desktops at 76.9%, but it’s possible that the reason mobile sales aren’t higher is because so few websites cater to that demographic. If websites build more mobile-friendly checkouts, customers will probably buy more on the go.

Last, why are so many locally-sensitive websites not compliant? The Real Estate and Small Business categories are 51% and 58% compatible, respectively.

But they’re also the most local-sensitive businesses. If you want to show up in search results for people in your area, it’s critical that they can find you — particularly if they’re on the move, visiting your city, or checking around for new homes.

Can you use Mobilegeddon to your advantage? It depends on your industry.

Basically, there’s room to grow in every industry.

And because there’s room to grow, there might even be a race to mobile compatibility. Depending on your industry, jumping on the mobile-friendliness bandwagon right now could be a huge advantage for your company. The more growing room your industry has, the better your chances of outranking the competition as you improve your site.

So you work in wholesale (or aerospace, mining, or textiles) and you want to start getting to the top of Google’s search results, join the small portion of your industry that has mobile-friendly sites. These industries will see the biggest fluctuations in rankings as companies gradually catch up to mobile-friendly design. If your company is in a more compliant industry, like financial services or automotive, a mobile-friendly site really isn’t optional.

The majority of your competitors have sites that are compatible with mobile devices, meaning that you need to, too. And if you take the time to improve your site and compete, you can still find success and beat out 17% (or more) of your competitors. Overall, these top-ranking industries will see the least fluctuation in SERPs over time — but they can still change.

Is your company in a particularly mobile-friendly (or unfriendly) industry? Has Google’s update affected your site at all? Let us know in the comments below!