How to Boost the CTR of Your Tweets

When you join Twitter, you have the opportunity to connect with millions. But how do you make that potential work for your business? With a handful of well-researched ideas, you can improve the CTR of every tweet you make and drive traffic (and potential customers) to your company’s website.

check your ctr for free with our calculator!

Dan Zarella analyzed over 200,000 different tweets to find that the most successful ones (in terms of clicks) show links early — roughly 25% of the way through a tweet. There’s also some really high interaction if you’d use a link at the very beginning or toward the end of your tweet.

Surprisingly, most accounts don’t take this advice to heart.

Even professional marketing accounts use their links where they logically fit — toward the end.

This has a couple implications. It could mean that Zarella’s research still isn’t that well-known.

It could also mean people generally don’t believe it. Or it could mean that people just have a hard time implementing his recommendation. So what’s the solution?

If you want to implement Zarella’s discovery, you have to lead with shorter questions or finish tweets with lines of hashtags and @-mentions. For example, if you interviewed someone for a blog post on Google’s RankBrain algorithm, you could format it one of two ways:

In either of those cases, you’re positioning your link roughly a quarter of the way through your whole tweet.

It may look a little strange, but that means you could potentially get a leg up on everyone else. And whether or not they work, they’re just tweets — you might as well try a couple new things and see the results!

Again using Zarella’s research, it’s clear that there are certain times of the day that it’s best to tweet. 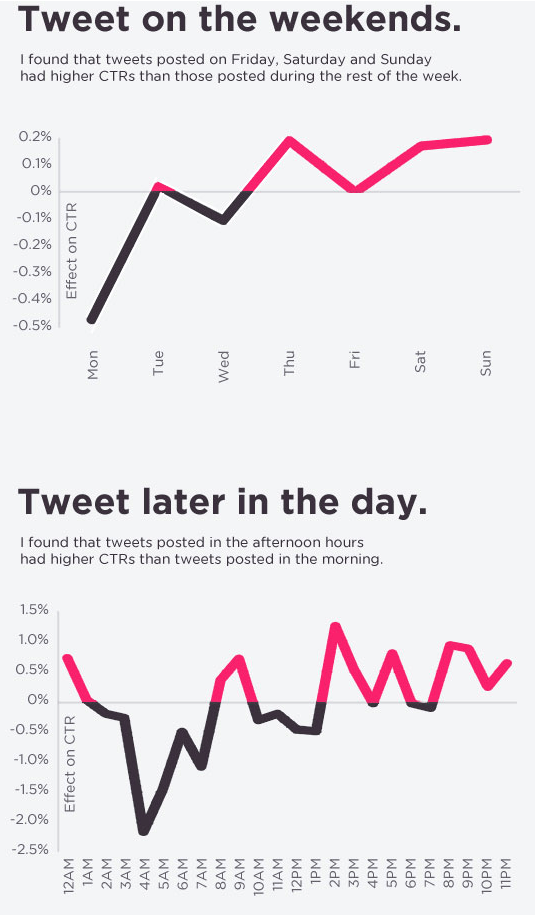 According to his research, late evenings on the weekends are the best time for people to see and click on your tweets. Logically, that adds up — people are probably flipping through their Twitter feeds for something to read before they go to sleep.

We can check out TIME’s Twitter feed for a decent example since they tweet every 15 to 30 minutes. 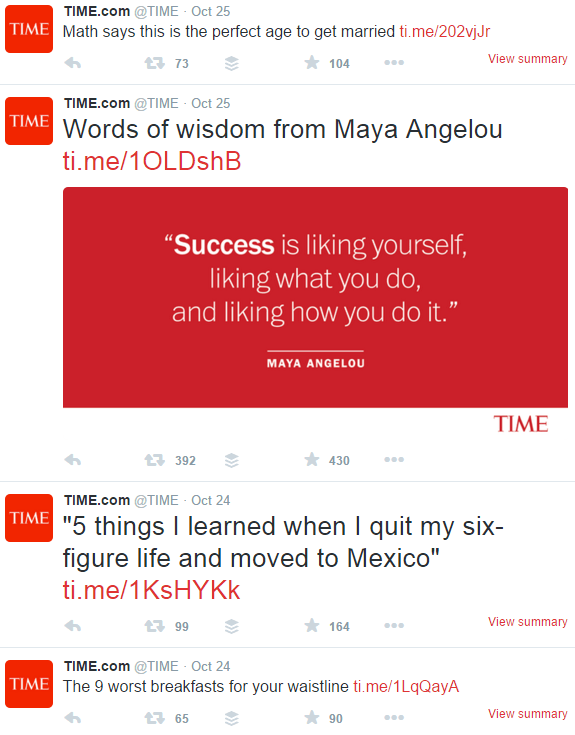 From the top down, TIME posted these tweets at 12:15 am on a Sunday, midnight on a Sunday, 11:45 pm on a Saturday, and 11:30 on a Saturday. And judging from the interactions, it’s clear that those late-night times during the weekends are Twitter’s prime hours.

Of course, your audience might be different — and more niche — than TIME’s. That’s why tools like What Time Should I Tweet exist. This way, if you’re not a mega-account with millions of followers, you can find out your most successful times for engagement with your audience.

They might be the same as what Zarella found if you cater mostly to end consumers. But your preferred times may vary if you concentrate on B2B sales or appeal to people during their work day. In that regard, Zarella’s discovery is a good start to a smart idea — but it’s not the end-all-be-all of statistics.

Although, like with the previous section, you might as well try it for yourself and see what results you get! 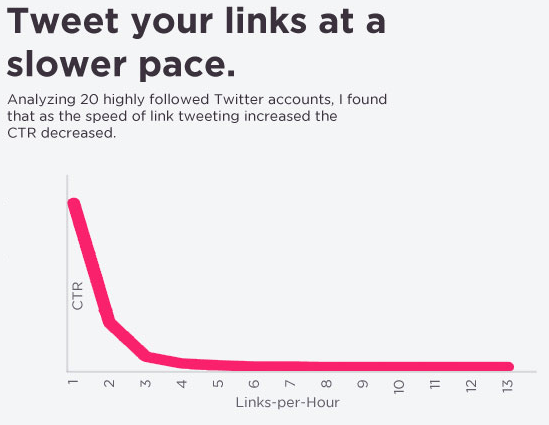 Like the graph says, this is only an evaluation of 20 Twitter accounts, which means the results are up for interpretation.

Mainly, people don’t want to see content from the same account all the time. Big accounts might be able to get away with it because of how much content they produce, but when you’re dealing with a niche demographic, you need to give your posts some time to breathe. At WebFX, a lot of us don’t tweet content that often — maybe once or twice a day — because we don’t want to overload our followers.

We tweet from the main WebFX account  more than any of our individual accounts since it has more followers, so it can get away with posting more frequently. Basically, show that you respect your followers’ time by tweeting the appropriate number of times in a day. And yes, that might sound vague.

But like the other advice on here, you really have to discover your followers’ tweet preferences using the insights available to you. If you tweet four times per day and see great results, keep it up! But if you go to five and engagement drops, pull it back.

Zarella’s research also showed tweets that used between 120 and 130 characters got more clicks. Still, that’s a generalization. According to Zarella’s graph, it looks like you could comfortably extend that range from 110 (or even 100) to 130 and still find a lot of success.

For you, that means you should use almost all of the available space you have for every tweet. It doesn’t matter what you’re promoting either — the important part is that you use the space you have to explain what you’re promoting. Some of the best Twitter accounts in the world use this style to their best advantage, including some recognizable names like the Financial Times.

FT’s tweet is only 110 characters long, but it manages to encapsulate an incredibly complex idea in just a few characters. It also leads users to click with an enticing question that appeals to their demographic. All in all, it’s a solid move.

Making the most of your tweets

Tweeting well breaks down to one simple principle that marketers repeat over and over: Know your audience. In this case, you have to know how much your audience likes to read, where they like to see links, when they’re engaged with your tweets, and when they’ve had enough.

Those specifics aren’t easy to discover for yourself — and that means you’ll probably have to discover them by yourself. To keep an eye on your Twitter account and its success, you can use Twitter Analytics for free. It’s incredibly helpful, and it tells you everything you need to know to make informed marketing decisions.

Have you discovered those factors for your audience yet? What success have you found on Twitter? Let me know in the comments!