10 Awesome Techniques and Examples of Animation with jQuery

jQuery can pretty much do anything you can think of. All you need is a creative imagination and some time to learn the simple and intuitive API. In this article, we share with you some innovative uses of jQuery in animating web design elements.

You’ll read about some interesting techniques, tutorials, and examples that will show you how to create similar effects on your own websites and web apps.

This example by Dutch web developer Gaya Kessler features an impressive animation effect of cartoonish smoke emanating from factory smoke stacks. Kessler thoughtfully supplies a configurable jQuery plugin with instructions based on his site’s header, so that you may create a similar animation effect for your website. Live Demo: Smoke Effect

Sam Dunn of the web development duo, Build Internet, wrote a tutorial on how to create an animated landscape using transparent PNG images. The tutorial takes advantage of the popular jQuery Easing plugin to help with the animation and the setTimeout() JavaScript function to time the events accordingly. Live Demo: Animated Postcard 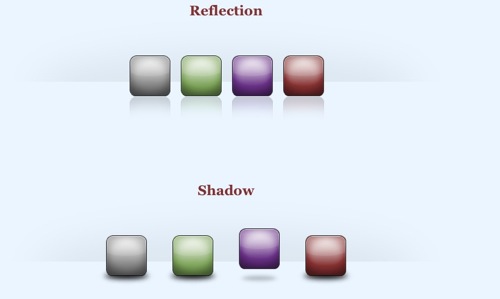 In this tutorial, you will learn how to animate image elements in a smooth and fluid manner. The tutorial features objects that, when hovered on, rises upwards. In the live demo of the effect, notice how the reflections and shadows at the bottom also changes when the object lifts up; hence “realistic” in the name of the technique.

The creators of the site youlove.us shares their code (and explanation) for making a seamless vertical scrolling CSS background; featured on the site’s header. The script is also dependent on the user’s system time; the animation starts at a different position depending on whether you visit the site at night or in the morning, a nice touch. Live Demo: youlove.us (web page header)

Glimmer, a JavaScript animation creation tool that leverages the jQuery library, has several live demonstrations for some of the things you can do with the app. For instance, with Glimmer, you can create cool animation sequences or make a spiffy and impressive rotating banner for your website. Live Demos: Freestyle Sample, Image Sequence Sample, Fade Text Sample 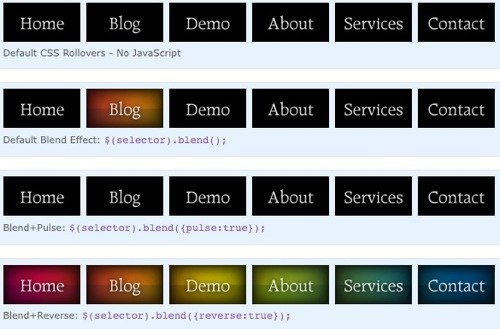 jQuery Blend is a plugin for animating CSS background images. The project emphasizes on web development best practices such as progressive enhancement  so that users with JavaScript disabled are still able to interact with your interface, albeit without the animation effects, making for a truly universal design. Live Demo: website navigation with different options

In this jQuery tutorial, you will learn how to construct a Parallax Scrolling background – first popularized in web interfaces with the use of Flash. The technique involves div elements with CSS background images. The Parallax Scrolling technique requires the scrollTo plugin by Argentinean Web Developer and Game Programmer, Ariel Flesler. 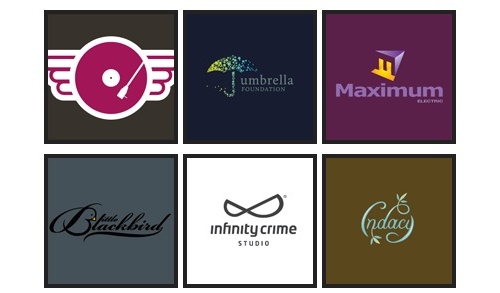 Designer and Developer Kevin Liew shows other website builders how to create a striking animation effect where a top image splits up into four pieces, moving smoothly to the corners, and revealing another image beneath it. It’s an animation effect suited for interactive thumbnails of images. Live Demo: Sliding Door Effect 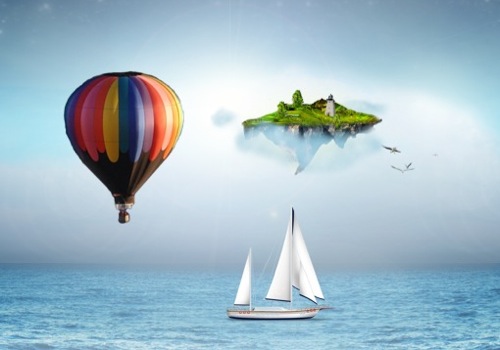 Editor’s note: As of April 16, 2012, this resource no longer exists so the link has been removed.

This technique can be adapted to many user interface related functions, or you can just use it to impart a memorable experience to your users.

This animated tutorial goes over a similar concept to the youlove.us example of vertically moving a large CSS background image. Illustrations on how the technique works will help readers grok the concept more fully. Devirtuoso, the author of the tutorial, goes through due diligence by offering an IE6 hack for backwards compatibility.

Live Demo: Animated Header Can jQuery replace Flash? Do you know of other impressive uses of jQuery to animate page elements? Why don’t we talk about it in the comments?