We’ll cover all the available methods for specifying colors with CSS in this guide. There are six ways to declare CSS colors:

In the example above, black was declared as #000000, which means it has no red, green or blue. (Color theory tells us that the absence of any color is black.) In CSS hex color notation:

A valid CSS hex color starts with a hash (#) followed by either six characters or three characters. Characters can be between 0-9 and A-F (or lowercase a-f). The minimum value of each color channel is 00, which is equal to 0 in the decimal numeral system.

The maximum value of each color channel is FF, which is equal to 255 in the decimal numeral system. So, knowing all of that, if we specify black, then:

What if we wanted blue? We can set the amount of blue to the maximum value (i.e.

We can specify a vast amount of colors simply by adjusting the amount of red, green and blue in the color. Let’s say we wanted get the color purple. We can do this by mixing together a bit of red with a bit of blue, and by leaving out any green.

For alphabetic characters, you can use lowercases. For example:

The decimal numeral system is what we’re most used to. It’s usually the system we’re taught in school, and it’s how most numbers are displayed in our world. The hexadecimal numeral system, on the other hand, isn’t mainstream; it isn’t used much outside computer programming and math-related fields.

RGB color notation is a more intuitive way of declaring CSS colors because it uses the decimal numeral system. The syntax format is:

OK, so we already know that:

Blue can be specified as:

RGBA is just an extension of RGB, with an added alpha (A) parameter that specifies the level of transparency/opacity the color has. Thus, we can use RGBA color values to make HTML elements semi-transparent. Alpha can be a value between 0 and 1. The basic format of RGBA is:

For an in-depth discussion of RGBA, read this: A Guide to CSS RGBA Colors.

The basic syntax is:

Hue refers to the colors we can see. The range of colors visible to the human eye can be charted in a circle, often referred to as the color wheel. Therefore, hue can be a value between 0 and 360. 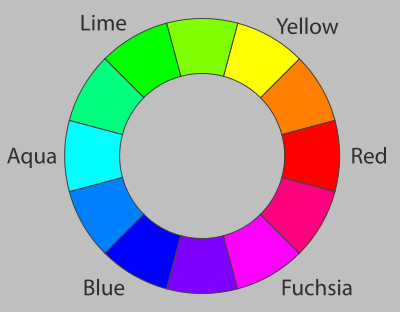 source Looking at the color wheel above, we can see that red is at 0o, green is at 90o, purple is at 270o, and so forth.

The higher the value, the lighter the color is. Lightness can also be a value between 0% and 100%. It’s easy to look at saturation and lightness as the fine-tuning of the hue.

Let’s say we want a pure red. Looking at the color wheel again, red is at 0o. So to get pure red, we can set the saturation to 100% to get the maximum amount of red color, and lightness to 50%.

If we wanted to have a muted/dull red, we can still use the same hue.

We just need to lower the saturation to reduce the color’s vividness.

If we want a dark red, we can lower the lightness value.

HSLA is just like HSL with an added Alpha (A) parameter that allows us to specify the level of transparency/opacity of the color.

The basic syntax is:

Alpha can be a value between 0 and 1.

The transparent color keyword is simply a way to say that the color has 0% opacity. Example

The currentColor color keyword is a convenience keyword that just means the color being declared is equal to the CSS color property value: For example:

Can also be written as: