When your business model revolves around reoccurring subscriptions — which is a popular model for software as a service (SaaS) products like Basecamp, FreshBooks and CampaignMonitor — the most difficult part of generating revenue becomes getting users to sign up. That’s where pricing plans — different subscription options with variations in price and features — play a pivotal role. In this article, I will discuss a few tips and best practices for creating and testing pricing plans for web-based subscription services and apps.

I had a great discussion on techniques and best practices for selling SaaS with DeskAway’s founder (and a very smart guy) Sahil Parikh.

The interesting thing I got from our conversation is something we already know is happening. IT — and thus, the Internet startup business model — is moving toward a reoccurring subscription-based economy. Thus, designing an effective pricing plan for users has become of paramount importance more than ever.

I believe it’s extremely important to test your work and gather data for designing and improving on a product.

Testing should be a  primary priority in the creation of a web-based app or service, especially because improvements can be made at any time. In the context of designing a pricing plan, it’s essential to check whether it works well for the target user base and to ensure that it generates your company the most optimal revenue. How do you test the efficacy of a pricing plan?

You can use A/B testing to discover differences in the number of sign-ups when you change a certain aspect of the pricing plan. Google’s Website Optimizer is a free and very popular tool for A/B testing, and that’s what we use at my company to test pricing plans.

You can test several components of your pricing plan. Let’s go through a couple of things we can test.

What are the effects of increasing or decreasing the price of your software?

Caution is needed here, since varying your prices for the same product can get you in hot water, as in the case of Amazon.com when they tested pricing back in 2000. Test the validity of pricing ideas such as whether increasing your price leads to more sign-ups or if having the price end in a 9 (such as $49 or $19.99) increases, decreases or has no effect on revenue generation. As a starting point for your price testing, you can read this short PDF guide on software pricing for inspiration.

There are ways in which you can create smart pricing plans that help your end-users choose an appropriate plan.

One of the ideas we tested was to have a mid-range plan that could lead more users to purchase our more expensive subscription plan. This idea was inspired by professor of psychology and behavioral economics Dan Ariely’s observation that “most people don’t know what they want unless they see it in context.” “Like an airplane pilot landing in the dark, we want runway lights on either side of us, guiding us to the place where we can touch down our wheels,” explained Ariely. When people see different options, they start comparing them with each other.

The hypothesis we tested was that people choose things relative to their neighboring options, and not in absolute terms. 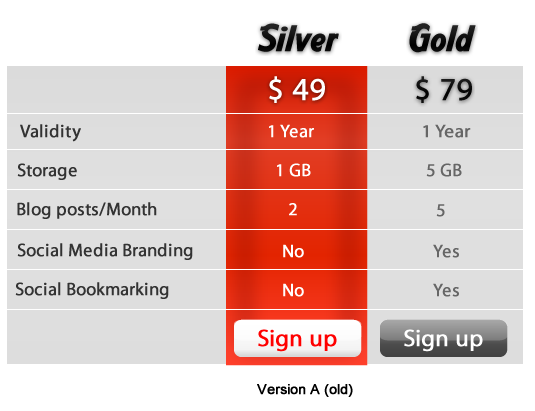 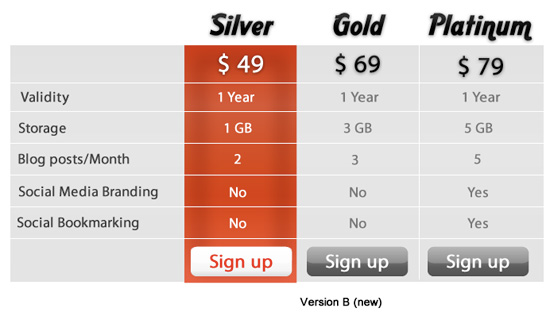 Our idea was that the $69 plan would lead to more sign-ups for the $79 plan. When we tested these two versions in Google Website Optimizer, this is what we found out:

The interpretation of the results: When we provided the $69 option, potential buyers compared it with the $79 plan and found that it was more valuable. What could have gone on in the user’s mind as he was choosing a plan to purchase? “For just $10, I’ll get another 2GB and social media branding/bookmarking.”

Some Tips for Free Plans

We have largely talked about paid plans, so let us briefly discuss the topic of providing free plans along with paid subscriptions: the freemium business model.

The objective of the free plan is simple: to grow your number of users. The theory is this: when a company is just starting out, their needs aren’t the same as bigger companies and, almost certainly, their budgets are more restricted. The freemium model reduces the risk to try and use your software.

It eliminates a barrier of use (i.e., cost) for companies starting out and those that would like to field-test the software without monetary commitment. Then, as they grow, and as their needs expand, they will upgrade their plan to one of your paid plans to match their needs. This is similar to how retail stores often offer reduced prices on certain items (called loss leaders) in the hopes of getting you in the store to purchase one of the regularly priced items.

The Forever Free Plan from MailChimp is a great example of using free plans to get sign-ups that can later on be converted to revenue through subscription upgrades. 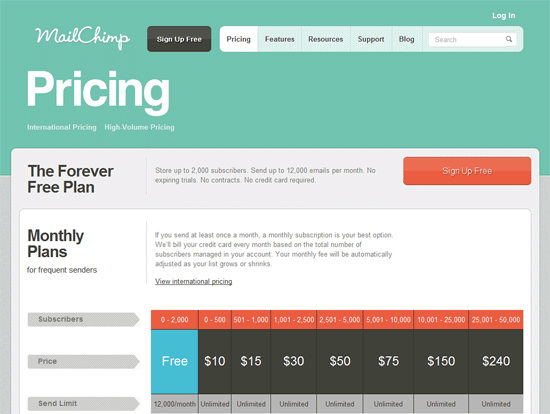 How do you differentiate between free and paid plans? Through resource throttling.

For example, MailChimp is free for up to 2,000 email recipients. If you have more email subscribers than that, you will have to upgrade your subscription plan. An effective free plan lets users use all (or most) of the features of the app.

For example, the popular file-syncing tool, DropBox, gives you every feature of the paid subscription plan, however, your resource is limited to 2GB of files instead of 50GB of files. 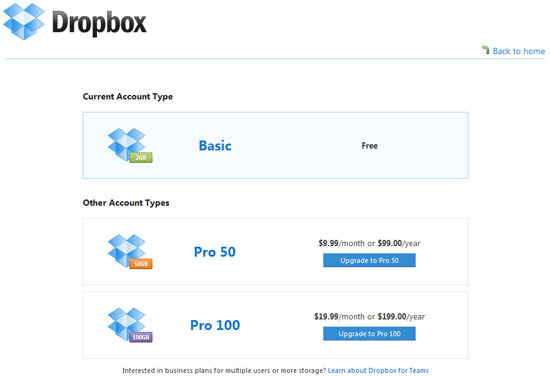 In addition, use the art of distinction to highlight the subscription plan that provides the user with the most bang for their buck. Give it a different visual treatment.

Similarly, if you find that you need to, you can deemphasize the availability of the free plan without discontinuing it. For example, the free plan of Basecamp, now a wildly successful web app, has reduced the visibility of their free plan. 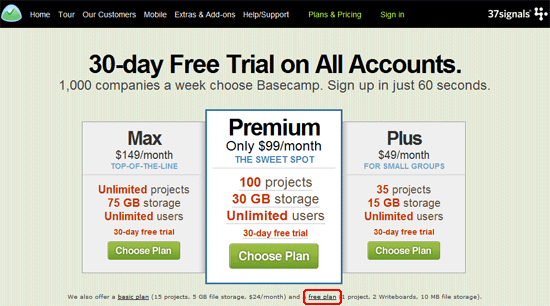