Grunt vs Gulp: Which Web Developer Automation Tool Should You Use?

Nobody likes doing boring and repetitive tasks. The good news is we can probably make our computer do them for us. When it comes to web development build automation, there are two major players you will want to look at: Grunt and Gulp. 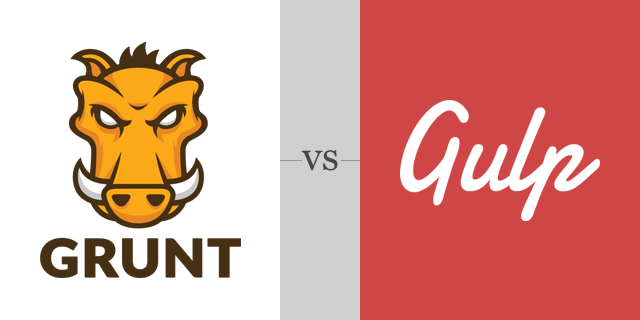 Similarities between Grunt and Gulp

Grunt and Gulp can automate tedious, human-error-prone build processes such as:

Basically, if you’re doing something over and over again, there’s a huge chance that you can automate it using either Grunt or Gulp. By integrating a task runner into our workflow, we avoid wasting time and energy on things our computer can do for us.

Ultimately, this means we will be able to focus on stuff that matter most: Creation and innovation. Think of a task runner as a framework for automating development tasks. JavaScript web development frameworks like Angular and jQuery make it easier to write JavaScript code.

Likewise, Grunt and Gulp make it easier to write build-automation code. How does a task runner work? Simple.

You write instructions that tell the task runner:

Since Grunt and Gulp are JavaScript task runners, we write our instructions using JavaScript. Here are step-by-step tutorials that will help you get started with Grunt and Gulp:

At first glance, Grunt and Gulp both seem quite alike. And using either one of them leads to the same result: A more efficient web development workflow.

So, in the broader sense, Grunt and Gulp are identical in that:

The similarities end there. The way they are configured and their method for executing our tasks are different.

Differences between Grunt and Gulp

There are two main differences between Grunt and Gulp:

Let’s explore a major difference between Grunt and Gulp by way of an example. We will create a task for Grunt and Gulp to do. This task will take a bunch of CSS files and optimize them to improve web performance. Here is what the task will do:

The great thing about Gulp is the stream-based build system. You just create your tasks by piping in all of your processes, one after another. Sort of like how we can chain methods on the selector function in jQuery.

The magic happens because of the object format that plugins exchange, the so called Vinyl. Vinyl is just an abstraction that describes a virtual file object—one that could refer to an existing file on the FS, a stream, or simply dead-ends with a null. — Preslav Rachev Gulp vs Grunt.

Why one? Why the Other?

What I have found was most of the tasks I create with Gulp result in a much shorter and cleaner task configuration file. In other words, with Gulp, there is less code to write for doing the same processes. You may think I’m biased — maybe a little — but I do use both Grunt and Gulp.

(I choose one over another depending on the type of project I’m working on.) The following table lists the Grunt and Gulp plugins used in the task.

The manner in which a task is executed is different in Grunt vs. Gulp.

How Grunt Executes a Task

For each process in a task, Grunt needs to:

How Gulp Executes a Task

Gulp, on the other hand, doesn’t need the intermediary steps of creating temporary files in between processes.

The code that comes out of a process goes directly into the next one, saving a lot of I/O time. That’s why it’s “stream-based”. Gulp uses Orchestrator, which helps it run processes with maximum concurrency. This means Gulp will try to perform processes simultaneously. Theoretically, this allows Gulp to finish tasks faster.

You can test the speed difference between Grunt and Gulp.

They can both report the time it takes to complete tasks. To measure the execution speed of the tasks we created earlier, the time-grunt and gulp-duration plugins were used. The Grunt task and the Gulp task were executed five times each.

The same source files were used (three CSS files). The destination directory (i.e. the css directory) was removed from the machine in between each task execution.

This way, the task runners are required to write to disk each time the task was executed. Be careful when interpreting the results of the following data. Many factors can affect the results, such as the variances between the Grunt and Gulp plugins for concatenating, minifying, and reporting execution speed.

In this particular case, Gulp was able to execute the CSS optimization task 4x faster than Grunt. For simple tasks, you’ll never notice the difference. But for complex build-automation tasks that take minutes to complete, this might be an issue.

You don’t want to wait around longer than you have to. It’s worth pointing out that there is a new version of Grunt on the way. It will use Orchestrator too.

This will most likely lead to task-execution speed improvements. Check out this blog post where Zander Martineau made a speed comparison test of Grunt vs. Gulp. He similarly reports that Gulp was able to complete tasks quicker than Grunt. 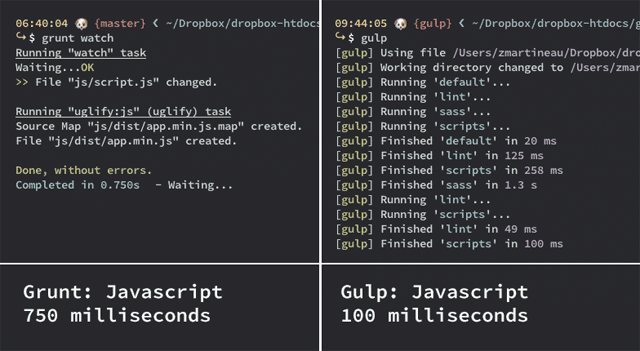 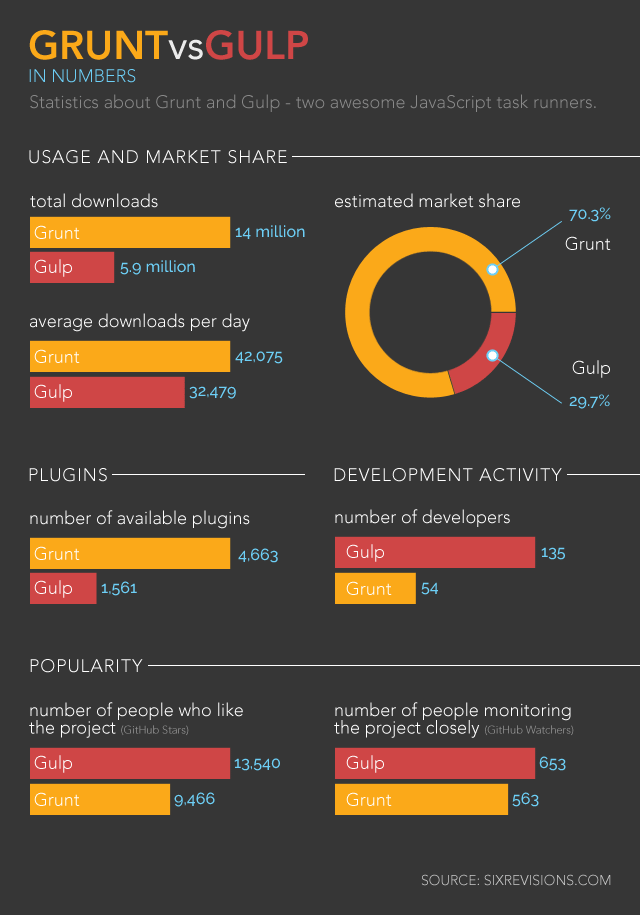 The Grunt project started in late-2011. It took the project about a year to get noticed. Since it was the first to arrive in the market, it has a larger user-base compared to Gulp. Gulp entered the scene in mid-2013. It only got noticed in the beginning of 2014. Since then, the number of adopters have been ramping up.

However, the “download” metric has several flaws for comparative purposes. Some developers might be using both Grunt and Gulp. Gulp has released more version updates compared Grunt, and the might lead to increased download rates due to people updating their software.

This measurement only tells part of the story. The following data is from npm-stat — a tool that reports statistics about npm packages.

Plugins are the bread-and-butter of task-configuration.

Although you can certainly write your own processes to automate, it’s much easier to use a pre-existing one if it already exists. Both Grunt and Gulp have official plugin directories on their site.They both display the number of plugins listed in their respective plugin directories. Grunt has 4,663 plugins.

Gulp has 1,561 plugins. Clearly, Grunt has more plugins than Gulp, with nearly 3x more plugins compared to its the latter. Keep in mind that Grunt has a bit of a head start, so having more plugins is to be expected.

When relying on a piece of software, it’s a good idea to look at how frequently it gets updated.

You want to use tools that are being quickly and continually improved via bug fixes, patches for security vulnerabilities, and feature enhancements. By looking at the GitHub repositories of Grunt and Gulp, we can gain insights about the level of development activity these two open source projects have. That’s because GitHub displays the number of commits, releases, and contributors.

Commits occur whenever the source code has been updated. This can be a good signifier of how active the developers of the project are when it comes to fixing bugs and adding/improving features. In software, releases refer to distinct stages of development.

For example (using semantic versioning conventions) v1.0.0 is the first stable release. v2.1.2 is a more mature release. The number of releases can show how often the software is updated.

It can give us a clue on how responsive the project’s developers are when vulnerabilities and other issues are found. Contributors are the hard-working people who contribute code to the project. More GitHub users contributing to the project can mean that there are more people reviewing the project’s source code, more people that can help develop the project, and a greater chance that someone can/will take over if the creators of the project decide they no longer wish to work on the project.

The tricky thing about using these metrics to measure software development activity is that each project may have unique policies for committing source code and releasing updates. Also, they may have certain requirements and guidelines that affect the number of people contributing code to the project. Also, as open source projects mature, there will naturally be fewer bugs to fix and features to add. So, theoretically, the rate of commits and releases will decrease as the project gets older.

But at least we can use these numbers to get a rough feel for how often the developers of Grunt and Gulp update their respective repos.

The good news is both Grunt and Gulp are healthy in terms of development activity. At the time of writing, Grunt had a commit five days ago, while Gulp had one four days ago.

Grunt’s lastest release was close to 11 months ago. Gulp’s last release is more recent, about  3 months ago. Where they differ most is in the number of developers contributing to the project.

Gulp has 2.5x more developers working on the project.

In GitHub, you can quantify the amount of people who are interested in a repository by looking at the Watch, Star, and Fork metrics. The Watch metric is the number of GitHub users actively monitoring the activities in a repo.

Even though Grunt is older than Gulp, we can see just by the number of stars, watchers, and forks that Gulp is more popular right now.

So, should you use Grunt or Gulp? Honestly, that’s up to you. It’s tough to say. One isn’t better than the other.

They’re the same type of tool that can do the same job. So it will come down to personal preferences. But let me share with you how I use Grunt and Gulp, in case you are wondering, and also to illustrate that you don’t have to pledge your allegiance to just one of them.

I use Grunt for my Angular projects. Mainly because of the Yeoman generator for AngularJS plugin that scaffolds my app just the way I like. There’s also a Gulp version for this, generator-gulp-angular, but I didn’t like it.

So I keep using Grunt for Angular projects. I make some small tweaks and updates on my task configurations if needed. I mainly use Gulp for my Laravel projects and some small websites.

Basically, if I can’t find a Yeoman generator that suits me, I’ll make it from scratch using Gulp. Gulp, in my opinion, is much simpler to use and configure. Hopefully the information you have read here will help you decide between Grunt or Gulp.

Pedro Semeano is a freelance full-stack web developer based in Portugal. Connect with him on his site, semeano.me, as well as on Twitter and Github.