Just like any social media platform, Pinterest provides its own set of ad specs to follow if you want your ads look stunning — and we know you do!

Creating beautiful, high quality ads on Pinterest is extremely important because of the platform’s strong roots in aesthetics. If you don’t follow Pinterest ad formats specs, you could end up providing your audience with grainy images of your products — which won’t help you in the sales department.

If you’re ready to learn more, keep reading! But if you’d like to speak with a specialist about launching your own ads on Pinterest, give us a call at 888-601-5359!

Before we can talk about Pinterest ad specs, let’s quickly go over the different kinds of Pinterest ads offered. The platform gives you tons of options when it comes to ads, and you can find a Pinterest ad format that perfectly fits all your unique products.

Each ad has its own benefits, which we’ll talk about later! Keep reading to dive into specific Pinterest ad formats specs.

Let’s get right down to it. Check out our Pinterest ad formats specs below! Promoted and standard Pins are image ads that show off a product that you sell.

Whether you’ve decided on an organic Pin or a promoted Pin, the Pinterest ad specs are the same.

Follow the image specs and the character counts to produce the best ad.

Video ads are extremely useful for showing, not telling — so if there’s something you want to show your users, Pinterest video ads are a great option.

These ads work well for:

However, if you don’t follow specific Pinterest video ad specs, your video could appear distorted, or even get cut off — rendering it useless. 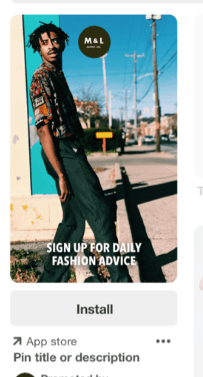 Want to show off more than just one of your products in a single ad? Promoted carousel ads are for you! These ads allow you to show off multiple products to users — all they have to do is swipe.

Carousel ads are a great option when you want to promote related products that work together.

With a variety of Pinterest ad sizes and formats out there, how do you know which is best for your products?

The simplest of all Pinterest ads, promoted Pins allow you to show off your product in a simple, clean manner.

A promoted Pin consists of a product image and a bit of text — making it great for those who want to keep it simple while still proudly advertising their product.

If you want to really show off your product, a video ad could be great for you!

Pinterest video ads allow you to showcase your products more in depth than promoted Pins since they can be up to 15 minutes long. That’s a lot of time to convince users that your product is the best of the best!

Use promoted app Pins if:

If you’ve just launched a new app, Pinterest is a great place to advertise it. You can use both promoted Pins or video ads to advertise your new app.

This one’s pretty easy, but you should use promoted app Pins if:

Carousel ads allow you to use up to five images to show off your products.

Not only are these ads great for engagement, but they also show users a wide range of what you have to offer — whether you feature products in the same family or products from completely different families.

If you want to ensure that your ads look their best to Pinterest users, it’s important to follow Pinterest ad specs. If not, you could end up with ads that are:

The purpose of your ads is to show the intricate details of your products — clearly and beautifully. When you fail to follow Pinterest ad specs, your images could appear grainy or skewed, and not give an accurate representation of your product.

When users can’t see your product properly, it’s likely that they’ll dismiss it and keep scrolling.

WebFX follows Pinterest ad formats specs for all of our campaigns

When you work with WebFX for your Pinterest advertising needs, you can rest assured that we’ll always follow best practices when it comes to Pinterest ad specs.

We’ll make sure that your ads are clean, beautiful, and eye-catching to ensure that you get the best ROI on Pinterest advertising.