You don’t have to look far to find headline-grabbing metrics these days. Apps are bragging about how many users they have. Bloggers proudly share their monthly visits.

While they might look good on paper, they don’t offer much in the way of actionable data.

A ‘user’ or a ‘visit’ is a fairly worthless metric on its own. There are huge variances from user to user – for example, one user could spend 25 minutes on your site while another mistakenly types in the wrong URL and leaves immediately. Not all visits are equal.

Read the full article or jump to a specific section:

What are vanity metrics?

While some metrics can be useful as a means to an end, they too often become vanity metrics – numbers that can look impressive but don’t really mean anything relative to the health of a website or business. The official vanity metrics definition stating: “Vanity metrics are metrics that make you look good to others but do not help you understand your own performance in a way that informs future strategies.” Entrepreneur Eric Reis was one of the first to popularize the term vanity metrics and cautions entrepreneurs on over-focusing on them:

The only metrics that entrepreneurs should invest energy in collecting are those that help them make decisions.

Unfortunately, the majority of data available in off-the-shelf analytics packages are what I call Vanity Metrics. They might make you feel good, but they don’t offer clear guidance for what to do.

Now that you have the vanity metrics definition, how do you identify them? Consider the following:

Now that you know what vanity metrics are and how to identify them, let’s look at an example of a physical store and the dangers of vanity metrics.

Say you are running a custom t-shirt shop and you run an advertisement in a local magazine offering anybody who comes into the store a free shirt with your brand on it. This marketing effort brings in a new record of foot traffic to your store: 525 people in one day.

While that number might seem awesome, not all shoppers are created equal. The number of people in your store doesn’t always strongly correlate with transactions, sales or revenue.

In this case, we spent a lot to drive people to our store for a free giveaway but not a lot actually bought anything. A crowded storefront can give the illusion of a successful business but that isn’t always the case.

If we refocus off of a broad vanity metric and look at which product or group of people is resulting in the most profit, things can be drastically different.  The t-shirt shop realizes that they make most of their money from local sports teams or clubs and focus more on bringing more of that segment of people into the store instead of blindly making a goal of as many warm bodies as possible.

The same principle is true for your website. Too often marketers make increasing traffic their overarching goal.

Social networks like StumbleUpon and Pinterest can drive impressive levels of traffic quickly and easily, but those numbers alone can be misleading.

There’s more data available now than ever before to marketers. Data is one of the most powerful tools that we have and should be a crucial part of every marketing decision that is made. However, interpreting data incorrectly or relying on vanity metrics to determine success can lead you down a dangerous road.

We’re going to take a look at some of the more common vanity metrics and the misguided directions that they point us in.

That’s an impressive metric to deliver to your superiors, right? Well, yes and no.

How many of them are interacting with your posts or are even interested in your store at all?

The way that most social networks are designed places too much focus on vanity numbers like followers and friends. We don’t have to spend any time actually figuring out how valuable our online presence is when there’s a convenient number of fans and followers attached to it.

Not only is the amount of Twitter followers deceiving because few actually interact with your company, but the actual reach of somebody on Twitter with 1,000 followers, for instance, is far less than 1,000. With a fast-moving stream of updates, you are only getting the attention of a select few of your followers with every update you post.

Instead of spending your efforts on growing your Twitter following, create a strategy designed to get your Twitter followers to perform specific actions. Maybe the purpose of your Twitter account is to drive new visitors to a blog or other landing page. In this case, visits can be a useful metric for us to use as getting people off of Twitter and onto your site is a big step.

Tracking purchases, email signups, and contact forms from Twitter can give you a much more accurate picture of how much impact the social sphere is having on your business.

How many “hits” your website is getting is one of the most dangerous metrics to use. Hits, traffic, visits, or however you quantify the number of people visiting your website is often the lowest common denominator when people are discussing a website.

As I mentioned earlier, while metrics like signups, phone calls, and revenue have small or no variance in terms of actual value to a business, a metric like a ‘hit’ has a much lower chance of resulting in a large amount of revenue. If you look at an email signup form, the chance increases…even more so if you are looking at a quote or lead form.

Just by going to a step or two closer to the end goal (revenue), you can get a more accurate look at how valuable each of your ‘hits’ is.

Let’s take a peek at referring channels in Google Analytics, for example:

Given the ecommerce conversion rates, it’s clear that traffic coming into this site from email blasts or organic search is much more valuable than traffic from social or display channels.

The more you drill down, the more segments of traffic you’ll find with radically different conversion rates.

Relying on overall traffic numbers as key metric causes you to make marketing decisions designed to drive traffic to a website instead of driving conversions. Analyzing your traffic sources and assigning value to each of them allows you to spend smartly and invest in traffic that will convert into leads and sales.

The most notable exception to this rule is if you are running a blog or news site where impressions/reach are crucial metrics for improving ad revenue and sales. You can still analyze click-through rates on advertisements, however, and determine which traffic segments are actually resulting in advertisement revenue.

Organic search traffic is still very much the most cost-effective way to drive relevant, targeted traffic to a website. Few, if any, marketing channels provide a better way to consistently expose your brand or product to interested people.

Within SEO, however, the dangers of vanity metrics are rampant. The most common pitfall is looking at rankings for specific keywords in search engines.

We’ve gone over the pitfalls of focusing too much on website visits…keyword rankings are even a step further removed from actionable metrics.

Rankings lead to visits which can lead to conversion and revenue and profit so they are still a valuable part of the analytical puzzle.

But judging the success or failure of your organic SEO campaign based on rankings alone is a major mistake.

For one, rankings don’t necessarily correlate with higher traffic numbers. If you know a bit of SEO, you can create dozens of new pages and have first-page rankings in a couple of weeks for low-competition keywords.

That is only one step in a bigger process, though. You need to ask yourself several other questions and combine ranking figures with other data sets to actually get the value of them:

As Google’s search engine becomes more personalized with every update, rankings become tougher to measure. What appears to be a page 1 ranking for you could be totally different for somebody in a different location or in a different social circle. It’s also vital to remember that most purchases online are driven by specific, long tail keywords and not the sexy, head keywords that most people track rankings with.

If you can’t find a way to increase rankings, your campaign may be doomed from the start.

Just don’t measure success or failure based on keyword ranking reports. Too many SEO campaigns are abandoned because “rankings are down” when actionable metrics like revenue or conversions may be trending upwards.

Number of Employees and Revenue

A classic vanity metric, number of employees comes up in nearly every casual or formal conversation about a business. The number of people a company has working for them might seem like an important metric to look at, and in some ways it is. However, as with most statistics, all it amounts to is another set of figures.

If you’re looking to invest in a company, looking at the number of employees doesn’t tell you much at all about their overall health. It’s easy to think “Wow, they have X amount of employees, they must be doing something right” but, the reality is oftentimes very different.

Groupon is a great example of this. They’ve grown from just a few dozen people to over 10,000 employees in a couple of years.

They’ve posted lofty revenue numbers as well. All appears well on the surface: 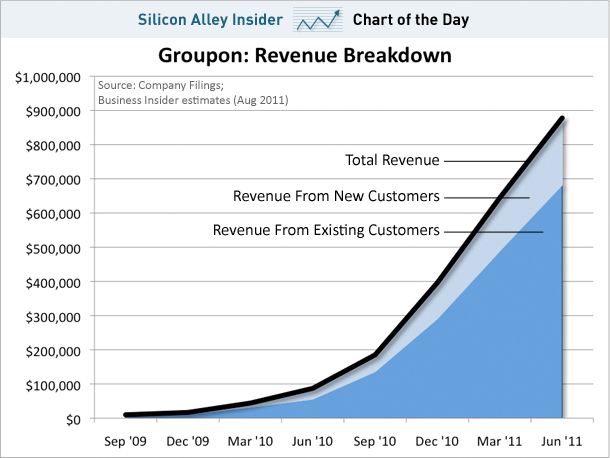 But in terms of actual profit the numbers tell a very different story: 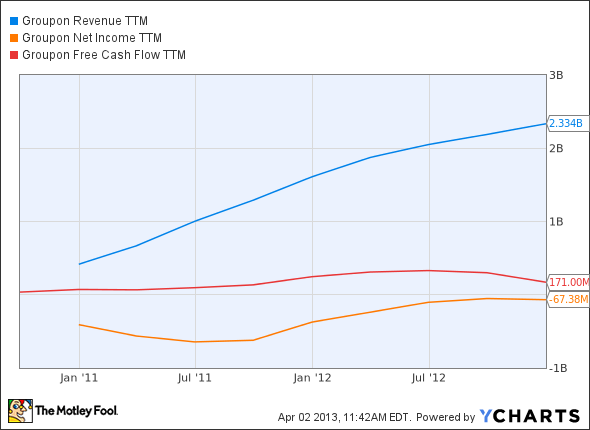 The hockey stick growth continued for Groupon but profit was non-existent.

Employee numbers and revenue are metrics that can showcase growth for a company but not necessarily health.

Putting an end to vanity metrics

When planning your marketing strategy and budget for 2014, base your decisions on actionable metrics, not vanity ones. Lazy marketers use those easy-to-calculate vanity metrics. Smart marketers embrace the challenge of discovering actionable ones.

With so much data readily available to marketers, we’re able to make more targeted and smarter decisions than ever.

That doesn’t mean sifting through hundreds of metrics and graphs is an easy or foolproof process though.

Keep your marketing focused on improving the bottom line and on the metrics most closely associated with that.