By Nicole Kohler  ~ 10 minutes to read

Amid the loss of organic Page reach on Facebook, the introduction of a “mute” button on Twitter, and the split of Foursquare into two separate apps, one social media platform is thriving: Pinterest. A recent study published by RJMetrics contains some very interesting data about the usage and retention rate of Pinterest. Perhaps the most surprising part of their data was the discovery that 84% of female users who signed up four years ago are still using the site.

For a social media network — or for any website, really — this is an amazing user retention rate. Compare this data to studies showing that only 10.7% of Twitter users who signed up in 2012 are still active on the site.

It’s hard to keep someone’s attention for four minutes, much less for four years. But Pinterest is doing it. If you aren’t already using Pinterest to promote your brand or business online, or aren’t taking it seriously, you have many reasons to start.

Even if you’re not an ecommerce company, or your target audience isn’t women, there are distinct advantages to utilizing this social media platform along with — or even more than — old favorites like Facebook. Here are three convincing reasons you should be using Pinterest to promote your business, plus a few examples of out-of-the-box pinning you can try for yourself.

A study published by Shareaholic shows that Pinterest drove approximately 7.17% of all social media referral traffic to websites in March 2014 — second place only to Facebook.

Traffic is one thing, of course, but sales are another. In a 2013 research study, Piqora determined that a single pin generates approximately $0.78 in sales.

According to Wisemetrics, the half-life of a Tweet — that is, the time in which you earn 50% of all clicks and views — is approximately 24 minutes. On Facebook, your posts only have about a 90 minute half-life at best.

So what’s the half-life of a pin, you might ask?

Try three and a half months.

(That is: ~151,200 minutes in 3.5 months, or 105 days as it appears on the chart, divided by 90 minutes = 1,680.) As you might imagine, this drastically higher number comes from the fact that pins are far more accessible than Facebook and Twitter updates. You can find them on your homepage “feed,” sure, but also on boards created by other people, and in search. Pinterest gives its users more opportunities to find content, and those opportunities are what increase the lifetime value of pins. Basically, if you post an update on Twitter, you’ll be lucky if anyone notices it amid the rest of the tweets they have to sort through (as of last March, approximately 400 million tweets are sent per day).

Make an update to your Page on Facebook, and if your content is good it will get into anywhere between 2% and 47% of your fans’ feeds… maybe. Add something to Pinterest, and just a single repin could get that content seen over and over again for months.

Another big difference between Pinterest and other social media networks: Pinterest is all about brands. They have a stellar Pinterest for Business page that includes case studies of brands that have done a great job of marketing on their site. You can add prices to items you pin from your site, letting people know how much it costs before they even click.

They even went a step further with this, enabling alerts so that users know when something they pinned has dropped in price. To top it all off, Pinterest is rolling out another round of promoted pin testing, which essentially allows brands to pay for pin placement in search or category feeds. So if you’re not getting the kind of exposure you want via free pins, you will eventually be able to pay for them.

Since so much of Pinterest is centered around, well, “stuff,” it makes sense that the platform would want to give the people who create Pinterest-worthy content a chance to get ahead. The jury’s still out on whether or not users will appreciate the addition of promoted pins, but it is good to see that Pinterest is easing into it slowly: this gives them the opportunity to listen to feedback and make needed tweaks before rolling it out to everyone.

A lot of brands have avoided Pinterest because they think it won’t be profitable, won’t send them any traffic, and won’t fit into their marketing plans. While these are understandable concerns, the data provided in this post should give you a few reasons to rethink your decision. Even if you’re a B2B company, don’t sell anything on your website, or are a services provider or firm (like us!), you can still use Pinterest as part of a healthy inbound marketing campaign.

Think about it as driving awareness and traffic, not necessarily as something that will drive immediate sales. While ecommerce stores may certainly see an immediate return on their pins, it’s important to remember that the sales funnel for the rest of us has to start somewhere. Why not make Pinterest that “somewhere”?

Your content stands a much better chance at lasting there than it does on your Facebook Page. Here are a few companies that you might be surprised to find on Pinterest, and some ideas you can take away from them. 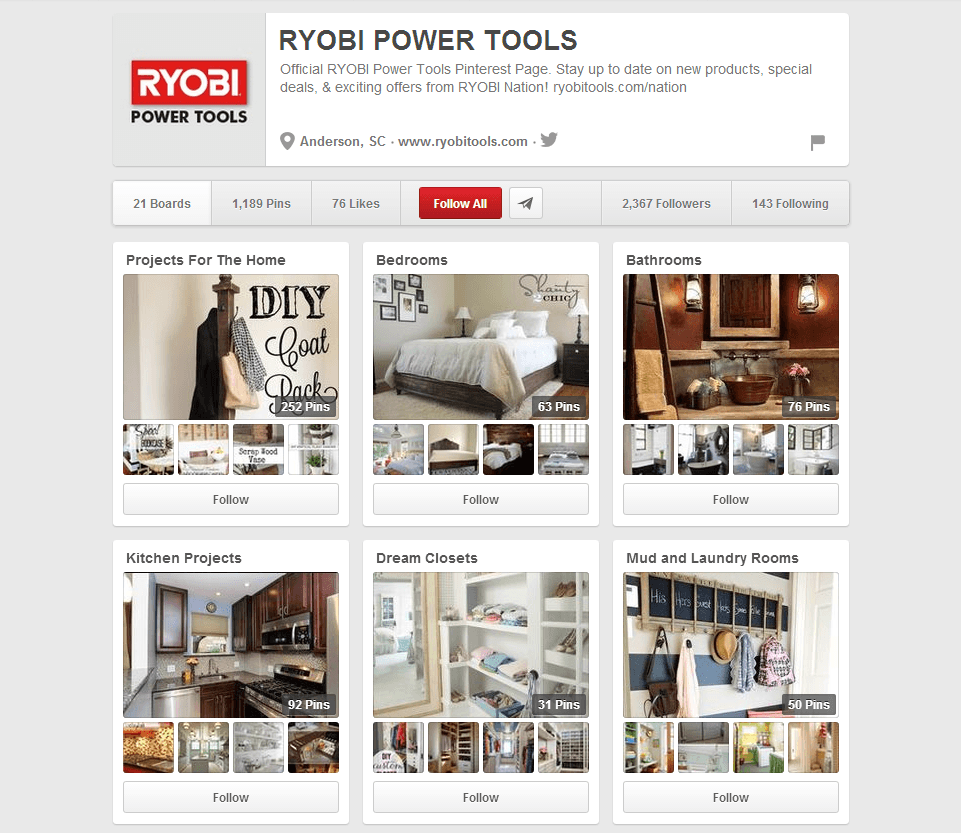 Only about 20% of Pinterest’s active users are male, so the 84% retention rate cited at the start of this post only applies to females. Seems a little disheartening for brands who have a large male audience, right? Not exactly: Pinterest hit 70 million users last year, which means that somewhere around 14 million men are on Pinterest.

Additionally, Convince and Convert found that men who do use Pinterest tend to use it more as a “shopping cart” — that is, their pins are more directly linked to future purchases. The RYOBI Power Tools Pinterest takes full advantage of these statistics. You may not think that “power tools” is a popular search on Pinterest, but it really is.

(Go ahead, give it a shot.) RYOBI successfully plays in this space not only by showcasing its products, but by collecting things that its target audience would love to build or make. 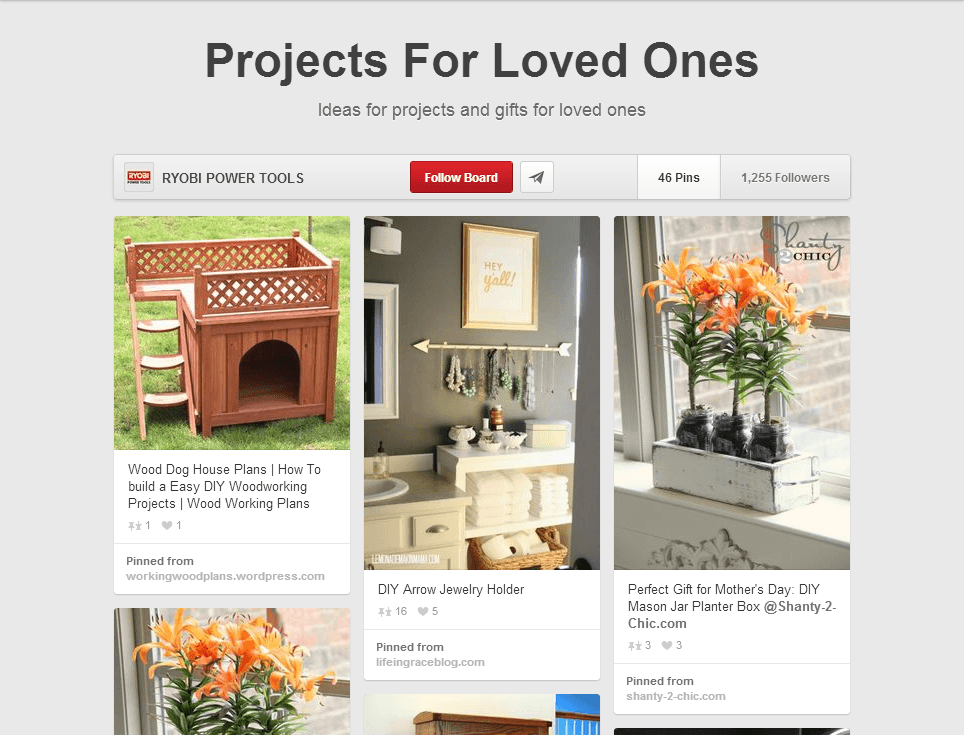 Why is RYOBI’s strategy so effective?

Well, think about it. If you find a pin of theirs for a jewelry rack, and you want to make one for your wife, you may realize that you don’t have a cordless drill. Guess what RYOBI sells? 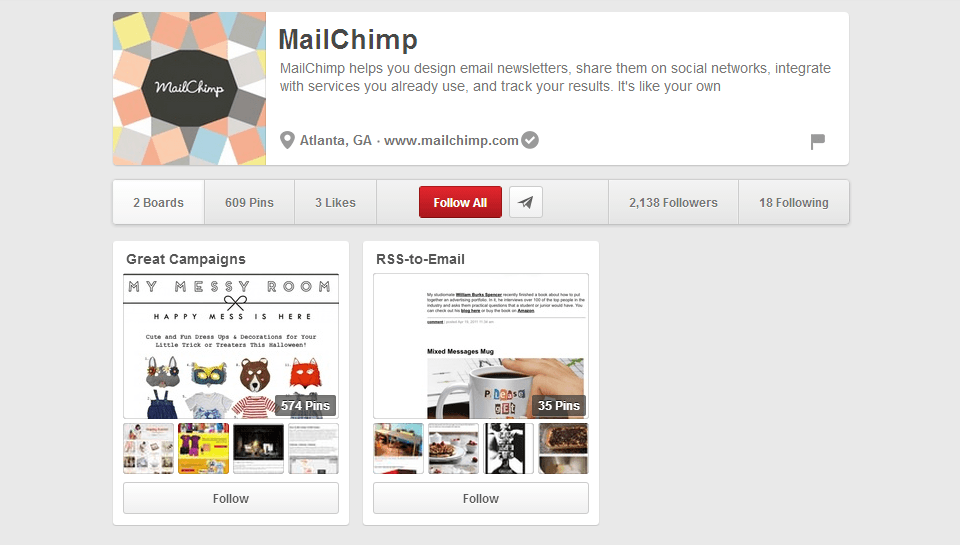 Service providers tend to shy away from Pinterest because, well, what are they going to pin? They have no product photos, no tangible images or pinnable content (aside from a few infographics, maybe), and they certainly don’t want to put prices on their pins. So what’s a company like MailChimp to do?

Three words: use your users. 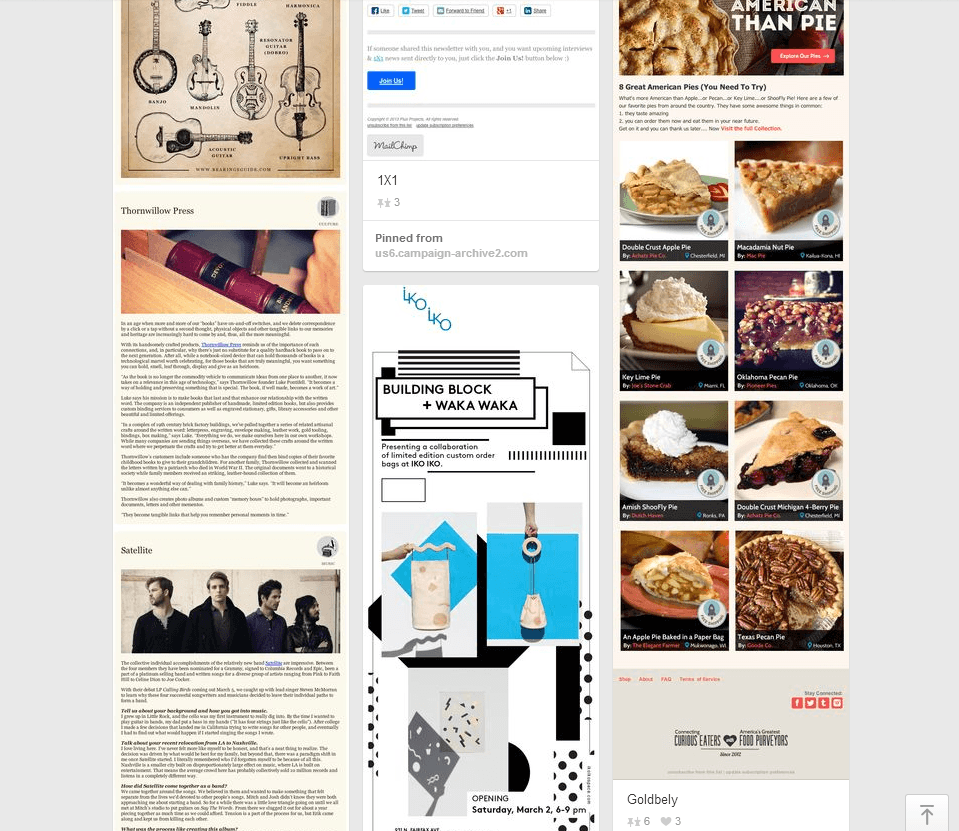 MailChimp pins extraordinary email campaigns composed and sent from its email platform. Not only does it make their users happy, it shows off what MailChimp is capable of.

You may not have known that you could make emails look this good in a drag and drop editor, but these pins say otherwise. You can apply the same advice to your own B2B Pinterest campaign: pin things that people have done with your service, or accomplished with your guidance. It’s not bragging if it’s true! 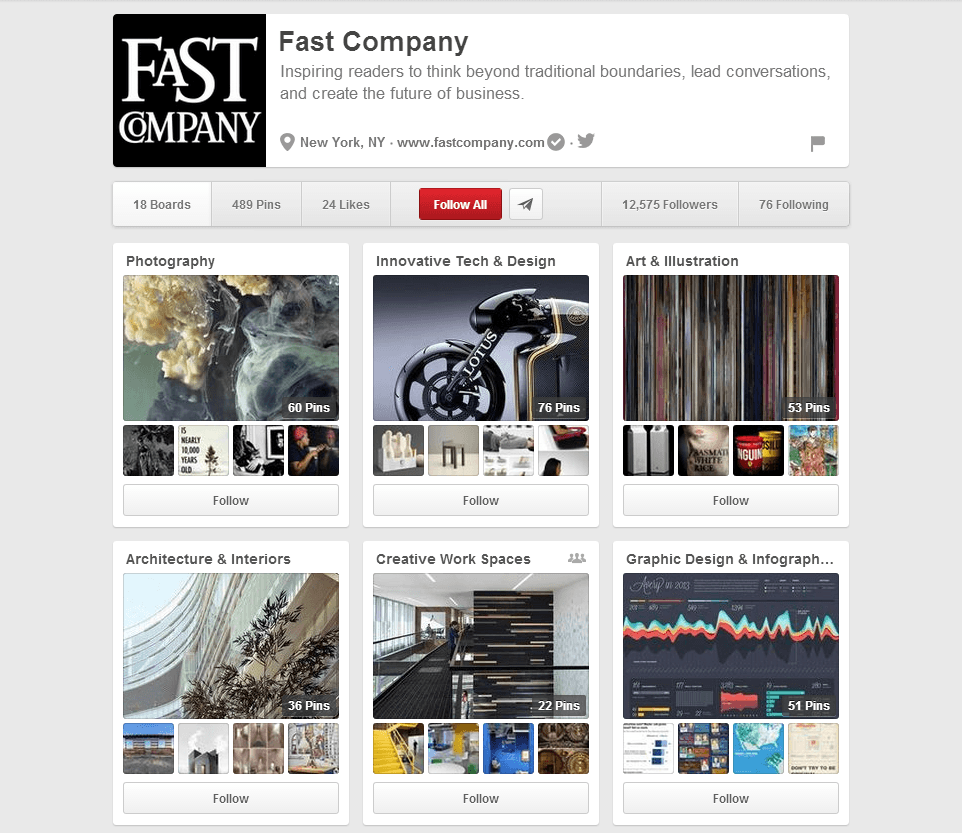 If your own content isn’t interesting enough for Pinterest, usually because you’re a news website of some kind, there’s another way you can use the platform as part of a marketing program: add value. Fast Company uses their Pinterest to share what they think is the best of the web. They aim to inspire people to “think beyond traditional boundaries, lead conversations, and create the future of business.” Essentially, Fast Company works on Pinterest because they aim to add value to the site, not just to promote their brand.

That’s how they built their Pinterest following up to around 12,000 users, well above many similar accounts. Here’s a peek at one of Fast Company’s boards, which is a general collection of graphic design and infographics: 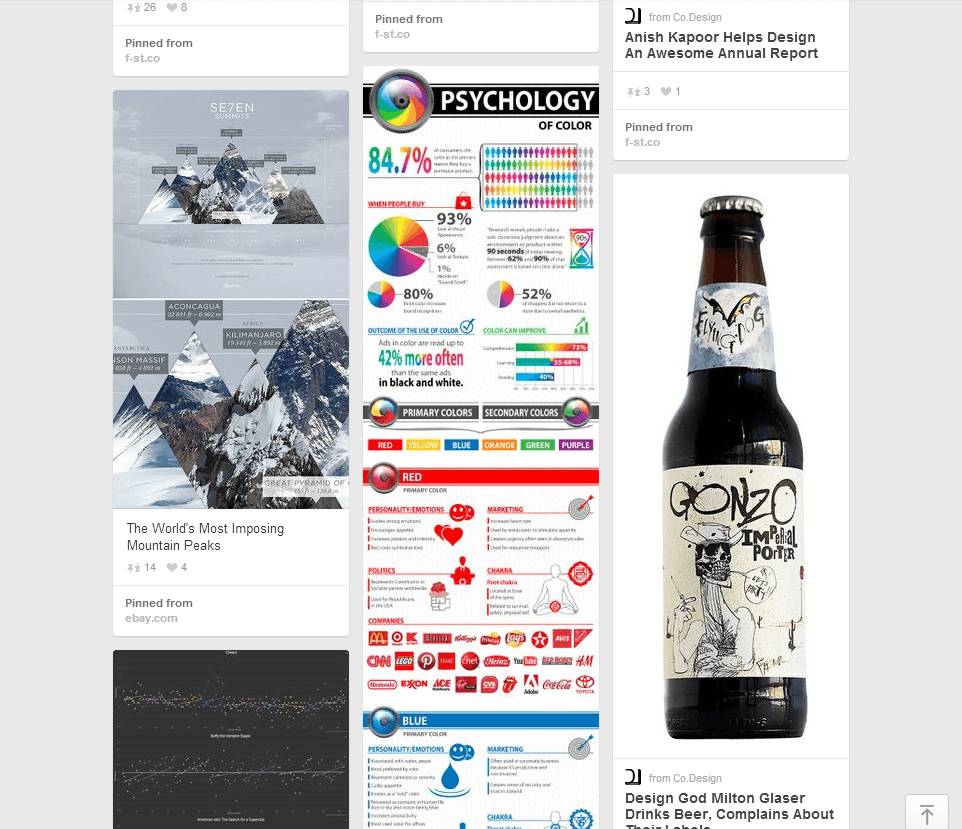 More than four years after its emergence as a new social media platform, Pinterest is still growing in leaps and bounds. It sports an amazing retention rate, encourages long-term activity among its users, and its creators are constantly experimenting with ways to make content more visible for users, and even more profitable for publishers and brands.

It’s for these reasons that Pinterest is the best social media platform out there for brands right now — and why a pin is 1,680 times more effective than a Facebook post. If Facebook’s reduced reach has your posts falling short and you’re tired of your updates being missed on Twitter, give Pinterest a try. You may be surprised by the results.

Need help starting a social media campaign of your own? Send us an email and we’ll let you know how we can help.