By Katie Goodling  ~ 7 minutes to read

Last week, Facebook announced a new comment feature that will allow for threaded replies and social comment ranking on business and brand pages as well as for individuals with over 10,000 followers. If you’re an eligible page manager, you can now choose to opt-in to the new feature. On July 10, 2013, all pages will be converted to the new commenting structure.

1. Conversations are cluttered and confusing for mobile and tablet users  “At launch, this feature will only be available on desktop and we plan to make it available in the Graph API and mobile in the future.” Wait, what? I was alarmed when I read this on the official feature announcement on the Faceboook + Journalists page. I always use Facebook on my iPhone and iPad while I’m on-the-go as well as when I’m relaxing at home.

I immediately wondered how the exclusion of mobile users would possibly improve the conversations I’m having on Facebook pages while using my mobile devices. My confusion intensified when I discovered a Facebook-sponsored study released just two days after the feature’s launch promoting the connection between smartphones and social networks. The study revealed that this year, a projected 181.4 million people will use smartphones in the United States.

And from their study of mobile users, 70% of respondents revealed that they use Facebook on their smartphone with 61% reporting daily Facebook usage. Most importantly, aside from email and web browsing, Facebook was the third most popular smartphone activity for 18-44 year olds of both genders and using both Android and iOS devices. After a little investigation and testing, I was able to see how mobile users view posts and replies from pages opted-in to the threaded comment configuration.

To be honest, it wasn’t pretty. Although nothing’s changed on their app or device, a mobile user’s experience on these pages has totally changed. Threaded conversations still appear chronologically, including replies to comments that could have been made on desktop computers hours after the original post.

You might be wondering just how confusing these conversations can be for mobile users. Let’s take a look at both the desktop and mobile experiences for Diane Sawyer’s Live Q&A from March 28th. This event, which demonstrates that threaded replies can encourage new marketing initiatives, was promoted on the Facebook + Journalists page. 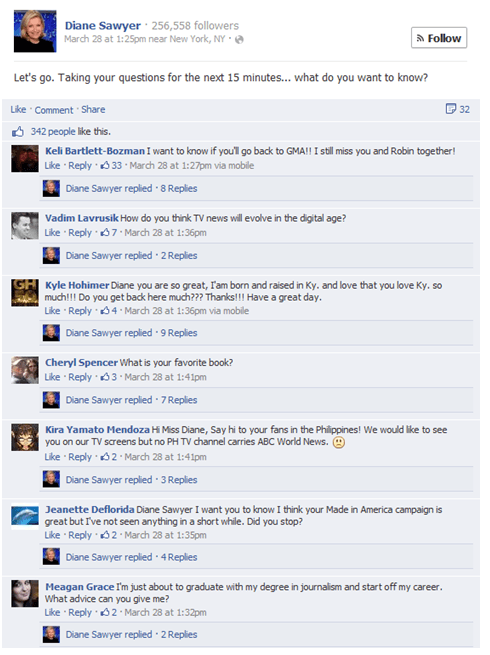 On my desktop computer, the conversation is fairly organized and I can easily identify which posts Diane Sawyer actually replied to.

Now, let’s take a look at the same conversation displayed on my iPad: 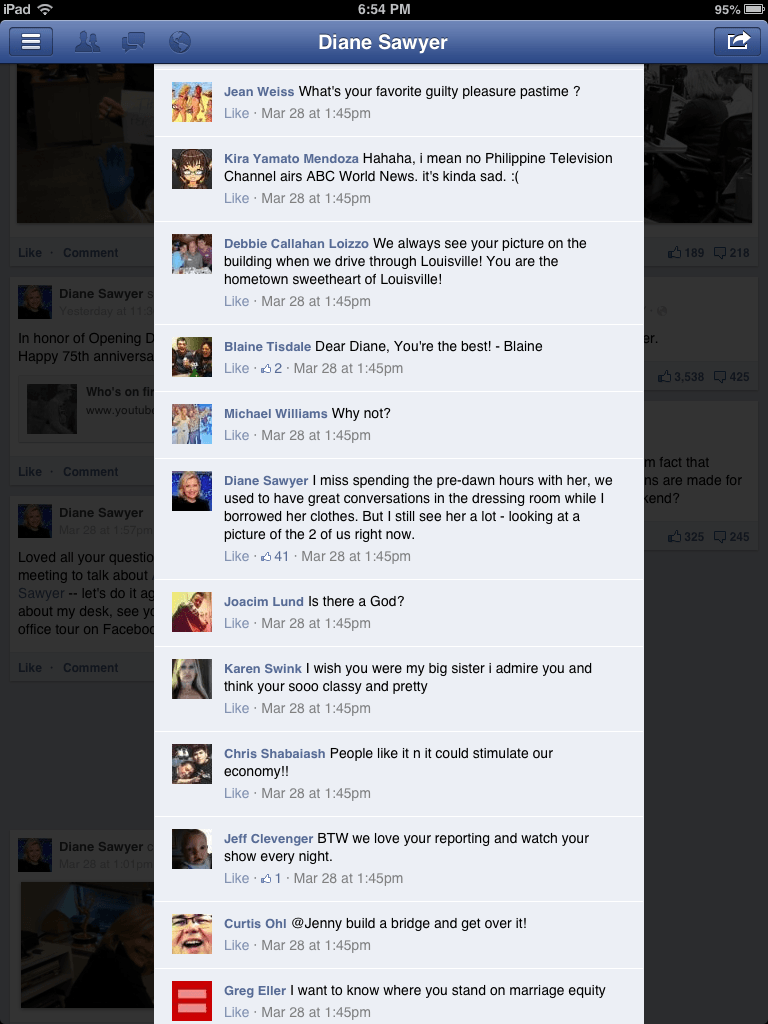 Notice that Diane’s response to the first question in the desktop thread is now displayed chronologically. Because page managers and desktop users are now using replies, there is no reason for them to tag the person they are responding to or to introduce their answer with a brief mention of the original question. As you can imagine, this makes it nearly impossible for a mobile user to logically organize a conversation (especially one with over 1,100 replies!) on a brand, business or public figure page.

Given that mobile users are usually multi-tasking and on-the-go, it’s unlikely that they’ll spend time deciphering the madness. I’m hopeful that a threaded comment mobile launch will happen in the near future. But if you’re a consistent early-adapter of new technology and social media features, beware that opting-in to threaded comments on your page might actually deter your growing mobile audience from interacting with your online community.

2. Negativity Can Rise to the Top, Making Brand Reputation Management Difficult Much like feedback spreads in the “real world,” negative comments on the Internet tend to gain more popularity and instill more conversation than positive comments. If this is the case with a negative comment left about your brand or business on your most recent Facebook page update, it can rise the top, making it the first comment users see when browsing your page or their news feed. Why does this happen?

Because the new threaded comments feature organizes post comments based on their social popularity. It’s similar to Reddit’s social ranking system but unfortunately, Facebook doesn’t have a downvote or the dislike option we’ve all been begging for. This basically equates to quantity over content.

It doesn’t matter if your online community is defending your brand to a naysayer, a reply counts as a reply, and will increase the comment’s popularity. This concept was also present in the Diane Sawyer Live Q&A conversation. A user was angry that Diane wasn’t answering her question and ended up posting her controversial comment multiple times.

Although identical, all of her comments appeared near the top of the conversation because people were responding to each individual instance by replying and clicking the like button. Another prime example of this brand reputation management problem is this photo that Pepsi recently posted on their Facebook page. Snarky and negative comments are being ranked first due to their number of “likes” and replies. 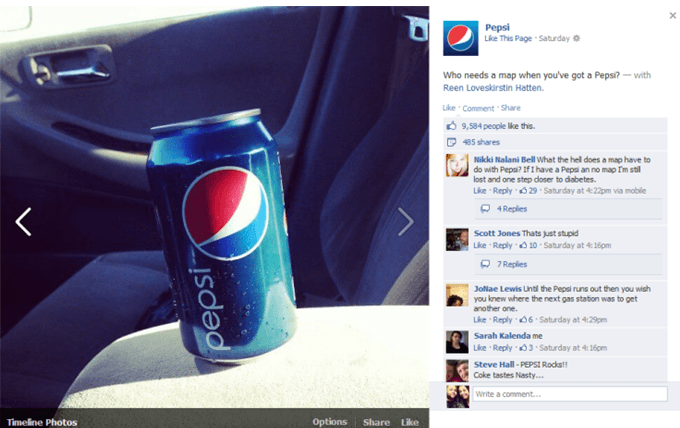 Since unfavorable comments about your brand have the potential for maximum exposure, you should consider spending a little more time monitoring your Facebook page post responses to protect your online brand reputation.

3. Voices Can Get Lost Complex threaded conversations spanning more than one level can be found in various email programs, text messages and online forums. Threading allows users to read conversations using a hierarchical system. This visual organization is important when users are trying to follow conversation and make sense of who is responding to whom.

Right now, Facebook threaded comments and replies only have one level of threading. This may lead to some confusion if page managers and other community members are replying to commenters within a reply thread. This can even cause desktop users to become confused when trying to follow a conversation on a Facebook page.

In the spirit of March Madness, head on over to this post from ESPN’s Facebook page about Wichita State’s big win and secured spot in the Final Four. One of the top comments has 33 replies and with people replying to other commenters, you can see that interpreting the conversation can get quite confusing!

Discouraged?! Don’t Be – You Can Use Threaded Comments to Your Advantage!

It may seem like I’m trying to deter you from using Facebook’s new feature, but I’m really not. I simply believe knowledge is power, and being familiar with these three warnings will help you successfully leverage threaded comments for your brand’s success. Since Facebook’s Graph Search results heavily depend on social ranking and page engagement, it’s becoming more and more important to build a relevant and consistent online community.

So here are a few actionable marketing tips you can use for your brand or business page now (if you decide to opt-in) or later (when Facebook forces you to switch) to get people involved in your posts and to encourage real relationship building: -Schedule live Q&A’s about your business, product, service or controversial industry issue -Use threaded replies for customer service by replying to and targeting individual questions and concerns -Directly engage with your popular commenters and influencers to build positive individual relationships – your other community members already value their opinion! Now it’s time for you to sound off. Have you opted in to the new replies feature?

Or, if you’ve decided to hold off for now, what’s your reasoning? Do you think threaded replies are an essential tool for improving brand and business conversations?