Table of Contents:
How to Use Reddit for Marketing

Lots of brands have tried and failed to market on Reddit. This can include anything from individual posts to events called AMAs, which stands for “Ask Me Anything” and includes a person taking questions from Reddit users about their job, life events, or other ideas.

These are some of the biggest failures on Reddit and why they didn’t work.

In 2012, Woody Harrelson started a Reddit AMA to talk about the movie Rampart.

But there’s one problem with that — AMA means “ask me anything,” and as Bill Nye showed us, that could be anything.

Harrelson’s problem started when he (or members of his PR team) answered questions about Harrelson’s personal life with phrases like “Let’s focus on the film.”

After that, the AMA quickly spiraled out of control since it became clear that Harrelson was just promoting a movie. He didn’t have any interest in answering real questions.

The backlash was huge, and the event is now remembered as one of the worst AMAs in Reddit history — and there have been a lot of AMAs.

The resulting comments speak for themselves.

One came from a PR professional.

And eventually, the tone of the AMA started insulting Harrelson and the film. 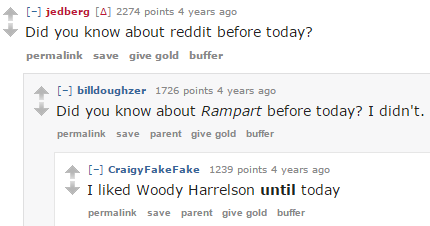 The reason jedberg’s name is in red is because that user is an admin emeritus. In other words, someone who has a lot of respect on Reddit and a big player in the community at large, especially in r/IAmA.

Eventually, Harrelson (or, again, his PR staff) had achieved the exact opposite of what he wanted to do in the first place.

So the takeaway from this example is that if you sign up to do an AMA, get ready for anything.

Mindfiremedia — now MindFire Studio — made a huge blunder of promoting itself on the subreddit r/SEO.

On paper, it kind of makes sense. Mindfiremedia provides services related to SEO, so they should promote themselves in that subreddit.

But r/SEO isn’t for agencies or tool creators to promote themselves — it’s for people who have questions about SEO.

So, as you can see, nobody paid attention to Mindfiremedia’s post. It only has one upvote — the one that comes with creating a new post — and nobody even bothered to comment on it.

In a way, this is almost worse than getting lambasted by vigilant Redditors. No one in r/SEO even bothered to tell Mindfiremedia that they were doing something wrong, which means they probably can’t do anything like this for their clients.

Beyond that, Mindfiremedia pretty much just told Redditors that they shouldn’t ever use Mindfire’s services.

Because they don’t know what they’re doing.

If you run a company, do your research and figure out the best ways to market to potential customers on Reddit.