By Trevin Shirey  ~ 13 minutes to read
Trevin is the Sr. Director of Business Development at WebFX. He has worked on over 450 marketing campaigns and has been building websites for over 20 years. His work has been featured by Search Engine Land, USA Today, Fast Company and Inc.

Storytelling is equal parts art and science. It’s an art because it requires an incredible amount of creativity and imagination to write something in the first place. It’s a science because there are tried-and-true methods to writing compelling stories.

Professional creative writers are familiar with these methods, especially when they develop a new one. It’s how film studios like Pixar know that they’ve made a hit before they even have a script. As a marketer, you can apply those methods to your content.

Bonus content: A video overview of the storytelling basics

Old methods of dry, boring writing and jargon-heavy explanations simply don’t work — especially as consumers increasingly raise their expectations for branded content. Stories are much better at getting attention. If you want to get a leg up on the next revolution in content marketing, these three storytelling templates will help you start.

The hero’s journey is a story structure so old that it predates religions. This structure focuses on one main character and how they fight their way to improving themselves by facing a series of trials. The stories of Hercules (the myth, not the Disney film) and Luke Skywalker are both famous examples of the hero’s journey. 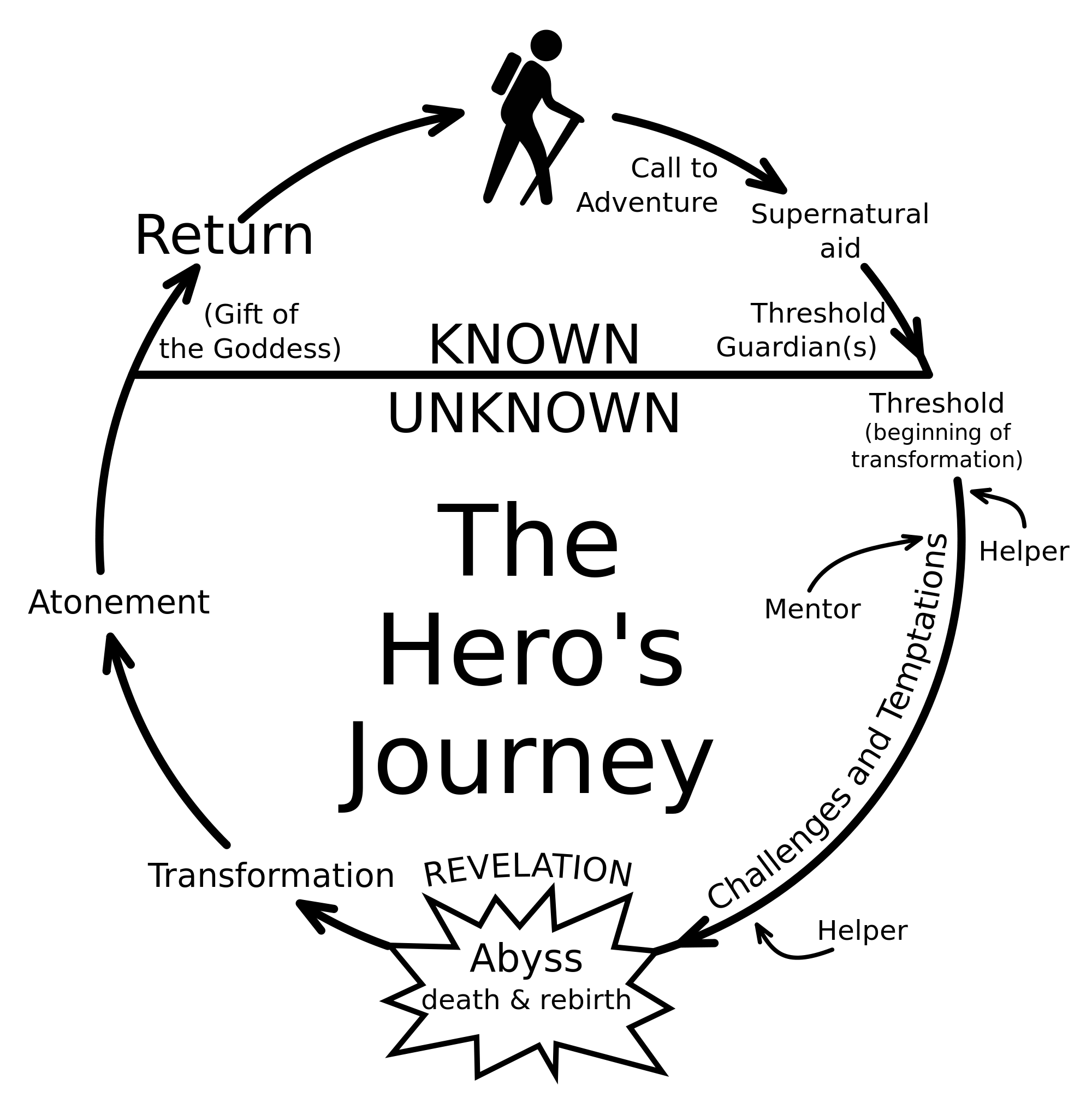 First, you have a character that you establish in the early parts of the story. Then, they have to be called to an adventure. At some point, they encounter supernatural aid, which brings them to a “threshold guardian” — someone who brings your main character into their adventure.

After that, your main character will begin to transform and typically acquire a helper and mentor. All three will work together to get through challenges and temptation, which eventually bring your hero to some kind of revelation. Your protagonist is then forever transformed and atones for their ignorance, naiveté, or wrongdoing in the beginning of the story.

They then cross the threshold back into their normal lives with the knowledge that they’ve acquired. Then, your hero is finally home, and they’re a better person for their journey.

Star Wars is the ongoing saga of the Skywalker family fighting through the tribulations of a super-advanced galaxy in chaos. Each Star Wars trilogy has its own protagonists. Episodes I to III focus on Anakin Skywalker.

Episodes IV to VI focus on Luke Skywalker. And (presumably) Episodes VII to X focus on Rey, who has at least something to do with the Skywalkers. In every trilogy, the films show their main characters with boring, everyday routines.

Then they get pulled into a conflict reluctantly, typically because of robots, and fall into the unknown. The “unknown” means doing something for the first time, like leaving the character’s home or experiencing violence. When everything seems to be too much, the main characters hit a point of no return where they can either give up or continue forward.

Against all odds, they choose to continue forward. That transforms them into new people — typically Jedi — which helps them accomplish seemingly impossible goals, like blowing up the Death Star. Then, the main character returns to a comfortable life with friends and celebration.

For Star Wars, a version of this journey is used in each individual film, but there’s also an overarching journey that encompasses each trilogy. You probably don’t have to worry about an overarching journey for your company’s story. But you can still use the same idea to create some high-quality, never-before-seen content.

How you can use the hero’s journey

Since we just established the outline of the hero’s journey, it’s now up to you to fill in the blanks. Hitting every one of these main eight points will give you the basic outline that you need. You’ll have to determine what makes life normal for your protagonist and show it in the beginning.

You’ll also have to determine what brings them into the unknown, how they’d react, and how they’d become better before the end of the story. It also helps to look up some famous examples of the hero’s journey. Mythology is a great resource, and so are major film series like Lord of the Rings.

Even Die Hard follows this model. But that’s not to say every story about the hero’s journey has to be some feature-length film. It can also be a graphic novel, podcast, and just plain text.

It’s up to you to determine how you want to use the hero’s journey. But with it, you can create content that’s at least 10 times better than your competition.

Dan Harmon is the creator of Community, a television sitcom that made the jump from NBC to Yahoo’s short-lived television project. Aside from that flagship show, Harmon has also created Rick & Morty, Heat Vision and Jack, and lots of other shows and films. And for each episode of those shows, he’s used his story circle.

Harmon — who I’ve mentioned briefly before — crafted a revamped model of the hero’s journey that’s more applicable to modern TV. It’s an excellent way to quickly convey ideas and keep a story moving, even when you want to throw a couple jokes into the mix. 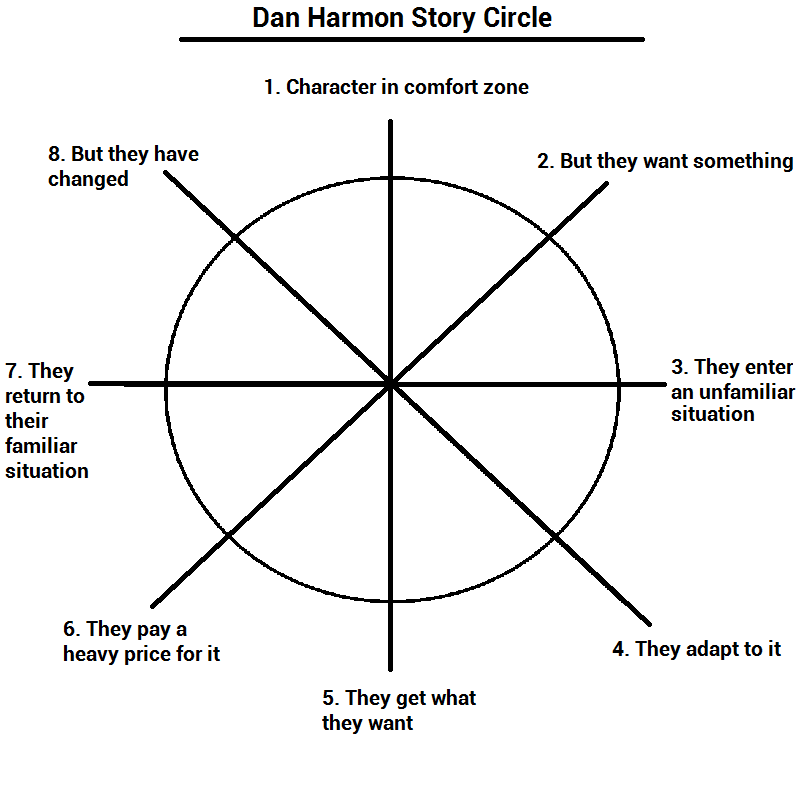 The circle starts with a character in his or her comfort zone.

But nobody’s content forever. Eventually, that character wants something. They enter an unfamiliar situation to get what they want, whether that’s material possession, approval from their peers, or any other kind of validation.

Then, the protagonist returns to their familiar comfort zone – but they’ve changed. They’re either happy or sad for that change, but regardless, they’re sympathetic to the story’s consumer. So even if you have a sad ending, someone will still be able to relate to your protagonist.

Community was a television sitcom that had 22-minute episodes and a strange sense of humor. But in every episode, at least one character — and sometimes more — went through each step of the story circle. The show is so refined that you can actually plot out individual points where you see everyone in their comfort zones, their reluctance as they’re pushed into unfamiliar space, and their coping mechanisms for dealing with a problem.

At the end, they’re always better people for their trouble — but it comes at a cost, which is sometimes the cause of another problem in a future episode. That kind of impactful, episodic storytelling works exceptionally well for today’s golden age of TV. It can work equally well for a once-and-done story that focuses on your customer base.

How you can use Dan Harmon’s story circle

Harmon’s story circle is perfect for marketing purposes. It’s all about ambition at its core, which speaks directly to modern consumers that want to get ahead in life. That’s much more relatable than the hero’s journey, which traditionally tells stories about people who punch dragons.

But the Harmon story circle is ideal for showing off the main benefit of your business. If you provide accounting software, your story’s protagonist can be a struggling small business owner who needs to get his finances in order for tax season. If you run a gym, your story’s protagonist can be a thin-limbed beach-goer who wants to grate cheese on their abs.

And if you sell clothes, your story’s protagonist can be someone just trying to fit in with society. There’s no wrong answer — you just have to create a common scenario in which your business helps someone get what they want. Piece of cake, right?

Your business performs that exact job every day. With the story circle, you just write it down.

Pixar is the end-all-be-all of reliable storytelling. Their films don’t flop — they just have varying degrees of success. The talented writers and animators at Pixar have narrowed down a simple outline for writing stories that succeed.

These six steps may not look like much — but they contain simple story elements that you can use to captivate your customers. Every Pixar film is calculated and refined to be a hit. The one exception is The Good Dinosaur, which came out November 2015 and didn’t even recoup its production cost.

Still, that means Pixar has produced 16/17 hit feature films. Not every formula is perfect, but a 94% success rate is pretty great.

Once upon a time, there was a widower clownfish named Marlin and his son, Nemo. Every day, Marlin would spend time with Nemo and try to keep his son nearby. But one day, Nemo went missing — even with Marlin’s precautions.

This same pattern applies to Wall-E, The Incredibles, and pretty much every other feature-length Pixar movie. Take some time to check out each film and break it down into these six parts. Once you can identify the pattern, you can start using it for your own business’s content marketing.

How you can use the Pixar story outline

Out of all three storytelling strategies in this post, the Pixar outline is probably the easiest to apply to your company. It’s the perfect formula for writing engaging case studies. “Once upon a time” is the classic opening line to millions of stories.

But you probably shouldn’t include it in your customer-oriented story since it sounds fairy tale-ish. “Every day” establishes a regular routine. That lets you show your character’s daily life before they encounter a problem.

“But one day” introduces the problem. For this, you just have to ask yourself, “What problem do my customers solve by coming to my business?” “Because of that” shows the initial results of using your business. That could be increasing leads, hiring better-qualified employees, setting up an IT infrastructure, or replacing plumbing in an old building.

“Because of that” shows the actual value of doing that work. So if someone has more leads, their business is doing better. If they have a strong IT infrastructure, they can communicate rapidly through IM and email.

Once you have the outline done, you just have to fill in the blanks. Or, if you don’t want to do a super-long story, you could make a six-panel comic strip that shows only these points. It may not be as effective as a full story, but it’ll still show how you help your customers.

In addition to their six-point story outline, Pixar also has 22 general tips for writing good stories.

With these 22 points at your disposal, you can turn any one of the three major storytelling formats into an excellent content marketing story. All you have to do is start.

What story can you tell to get more customers at your business? Or have you already told one?