The Evolution of Internet-Enabled Devices

By William Craig  ~ 7 minutes to read

The Internet is a wondrous thing. It’s an unrivalled source of knowledge for its users, and as web designers and web developers, it keeps many of us from becoming homeless with “Will code for food” signs hanging around our necks!

As the Web matures, the devices that provide access to it have evolved along with it.

No longer are we limited to “surfing the ‘net” on a 28.8 kbps dial-up modem. These days, we don’t even require a computer to go online — we have smartphones, tablets, e-book readers like the Kindle, and more.

Let’s look at the evolution of the hardware that gives us access to the Internet.

We can trace our digital ancestry back to devices we still use today: traditional desktop and laptop computers.

In the formative years, designing and developing websites wasn’t much to write home about. Web standards were in their infancy, browsers were firing bazookas at one another from the rooftops of the digital infrastructure, and a “feature” of many websites was a counter that told everyone that the website had “000002” visitors (one of those being you, the person who built the site). 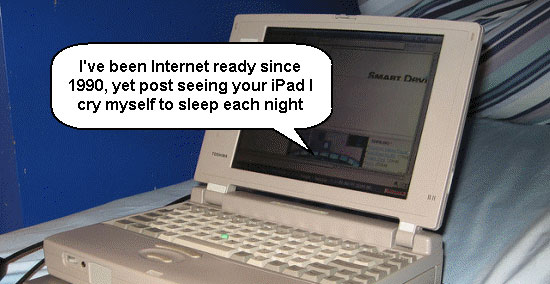 They’ve been on earth longer than some geeks, and we still love ’em! Image source: TehBoris

Screens started in the 800×600 range, grew to 1024×768, and then a few others fell into the mix as resolutions became something of a “whatever works” issue for users.

That, and browser windows used their fair share of monitor screen real estate, what with the unnecessary Ask.com and Alexa.com toolbars and sidebars people installed.

Then everything changed. There were rumors of cell phones gaining Internet access, whispers about how this would change everything.

One little smartphone, powered by hearsay, Steve Jobs and unicorn blood, broke open the doors on a new range of devices to design for.

Smartphones came onto the scene.

What made things even more fun was that other rendering engines joined the fray, too!

Some are fully featured, and others…

not so much. Image source: Guy Schmidt

No longer were cell phones powered by WML (a special markup language intended for portable devices). No longer did we need to access the Web on scaled-down user experiences through PDAs if we wanted to browse on the go.

Touchscreens were the next big interface movement. Displays got smaller, and imaginations got bigger.

For the cell phone makers that didn’t put radioactive glowing apples on the backs of their products, the need to build something competitive grew — as did the number of mobile-friendly browsers for us to test our stuff on.

The switch-to-mobile excitement was a giant leap for mankind, but the third Internet device evolution was a small step for many of us.

Sure, mobile devices were cool; we could research Angry Birds cheats on some website while sitting on a train. We got a taste for the Mobile Web and wanted more.

So touchscreen smartphones scaled up to become tablets, PCs scaled down to become netbooks, and printed books are being replaced with Internet-enabled reading devices.

Thus came the next wave of devices! 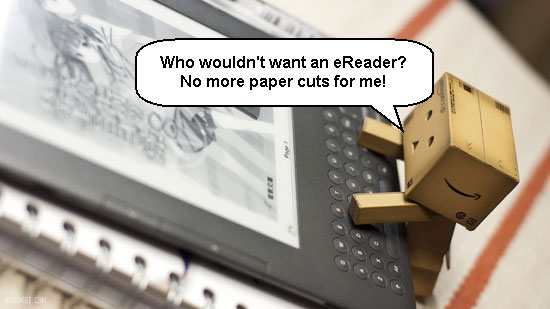 They need to boot, but you’re less likely to have them thrown at you.

Tablets aren’t exactly new. But when they became popular, and then ubiquitous, they gave us designers a reason to pay attention. The Web was no longer bound by one of two device types; we all wanted to pretend we were in Minority Report, with thin yet full-featured gadgets.

Netbooks, being cheap, also became popular, and resolution consistency became something designers could only dream about.

So many things are becoming web-enabled that we’ve arrived at the next era of device types — one that is set to blow the wheels off the tablet surge in terms of widespread appeal.

Our old friend, the television, and its time-eating sidekick, the game console, are becoming web-enabled faster than you can say “Oh no, not something else to design for!”

They present a new range of issues to address. (Try navigating a website with a TV remote.) 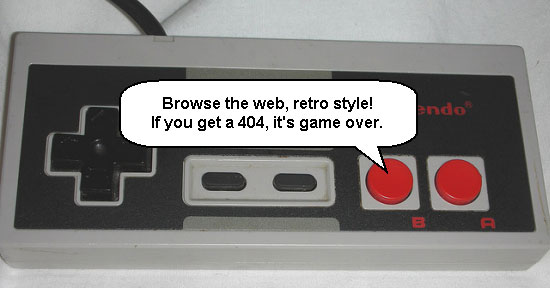 There are adaptors for everything, so users can browse with almost anything!

A whole new type of web browsing could arise: the ability to browse websites by re-enacting the YMCA song by way of a HAL-9000-style geek-mocking device called the Kinect (i.e. with gestures and movement).

And the ways we code, design and use the Web could change as well.

Personally, I’m all for learning to code for all kinds of devices. Nothing seems cooler than waving a Wii-mote like a ninja in front of a webcam that’s attached to a 100-inch LCD display while telling clients, “Yes sir, it’s all part of my job.”

Another advancement in our consumption of the Web, beyond TV, has been the inclusion of web-enabled devices in trains, planes and automobiles. The ability to watch your favorite YouTube clips while on the move is quickly becoming standard — though we still need safety devices bolted on to ensure that we don’t get distracted by the hamster dance video while driving and crashing into a lake. 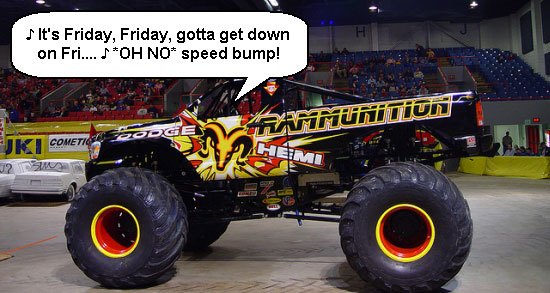 Having web access in your car makes you wonder whether you’re addicted.

Yet with this next area of expansion, the web-enabled movement gets still more bizarre.

You may think the kitchen is one place that will remain Web-free, but I’m sure you have household appliances with some degree of cleverness.

In the past, we had glimpses of Internet-enabled appliances, but at the Consumer Electronics Show and other technology expos this year, companies announced that ovens, refrigerators, dishwashers and microwaves would get “webified.”

The prospect can be terrifying as well as exciting.

I’m sure your immediate thought, like mine, is of an oven crashing like IE6 and setting your house on fire.

From the early days of computers and laptops to the Mobile Web movement to the feature-filled tablets, watches, MP3 players, netbooks, e-book readers, radios and other digital goods becoming Web-friendly, the way we access the Internet has come a long way.

Yet, even as you read this, the gap between devices is increasing, the range of platforms is increasing, and, before we know it, we might be living in houses of the future powered entirely by Rickrolling and troll-hunting.

As web designers and web developers, we need to account for a wide range of platforms in order to make our users’ lives convenient.

The Internet is a grand social platform with nigh-endless possibilities for applications and services. We need to rethink what we choose to (or choose not to) support.

Luckily, there will always be cool new stuff for designers and developers to wrestle with, and thankfully, few of us will go out of business!