How Much Do Cyberattacks Cost the US?

Over the past several years, cyberattacks have made the news more and more in the United States.

There are a couple of reasons for that, but the fact of the matter is that US companies and government entities are frequently the targets of malicious cyberattacks, resulting in hacked websites, stolen user data, and astronomical financial losses.

But are cyberattacks really a threat to the average American business or individual? We researched the stats to find out, and the truth is frightening.

How much cyberattacks cost the US

One of the most important parts about this infographic is how Keith B.

Alexander — the former head NSA, CSS, and USCC — calls cyberattacks “the greatest transfer of wealth in history.” His experience speaks for itself, which is a big part of the reason cyberattacks and hackers are so terrifying for US businesses. Is there anyone in the world who would know hackers better than a US general who ran three federal cyberwarfare departments? With his opinion in mind, let’s take a look at the facts that influenced him. 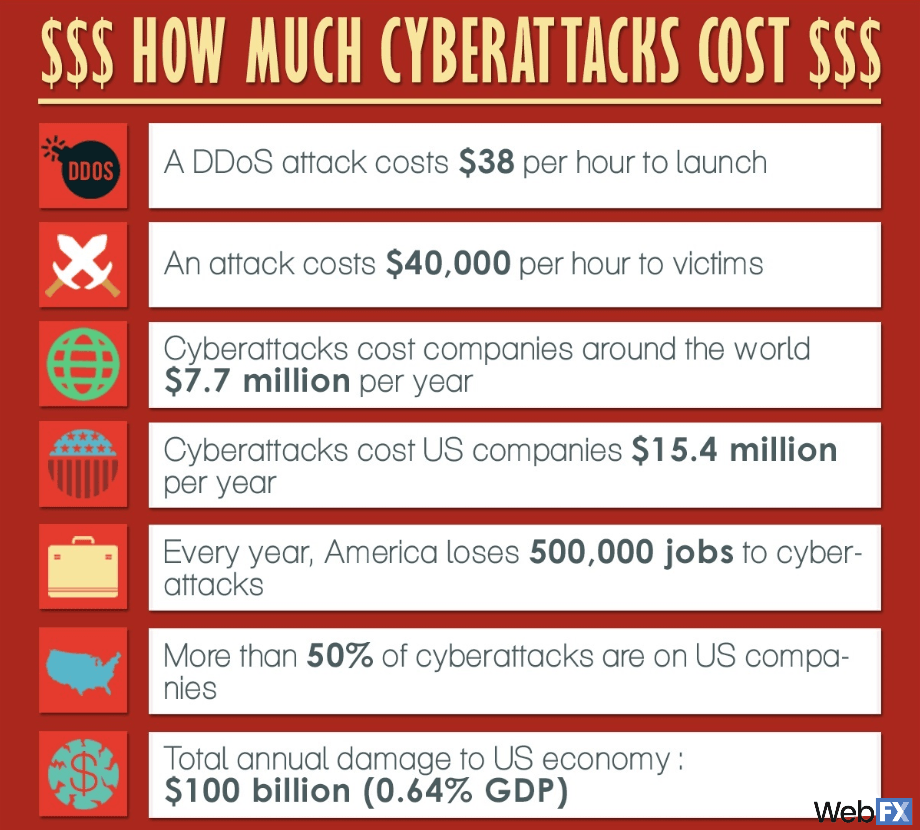 First, a distributed denial of service (DDoS) attack only costs $38 per hour to launch. So if someone wanted to take your site down for an entire workday — or even your peak hours — they could do it for less than $400. Granted, that’s a lot of money depending on who you ask. But at the same time, most people can probably afford to front $400 for a one-time fee. Especially when you consider how much damage they can do.

For every hour that they take your business’s company offline, they cost you $40,000 per hour in damages. For the hacker who’s only paying $38 per hour, they net $1052.63 in damages for every dollar they spend. That’s an incredible ROI in the worst way possible, and all it takes is an angry person with the right connections.

With that in mind, it’s no wonder cyberattacks cost companies around the world $7.7 million every year. And since half of the world’s cybercriminals target US entities, it’s no wonder that they cost US companies $15.4 million per year. As a direct result, the United States loses 500,000 jobs every year because of the money either stolen or prevented by cybercriminals.

The targets of cyberattacks

There are two industries that get hit the most by cyberattacks.

Financial services are often hit because — obviously — they have money. Everything from stolen bank information to a hacked ATM is considered a cyberattack, and the hackers all directly benefit financially. There’s no middleman, no buyer, and no “hot” merchandise.

As long as they cover their tracks, they’re fine. But why are energy companies #2? You can’t profit directly from shutting down a power distributor’s grid, and you don’t make money if you destroy the infrastructure of an oil conglomerate.

In 2014, the US energy industry suffered 79 hacking incidents (that we know of). It’s nice to see that they’ve decreased since 2013, which had 145, but that also means hackers could be getting more sophisticated with their methods. After all, anti-hacking measures can only prevent hackers using today’s strategies.

If a hacker creates an innovative new way to enter your system, you couldn’t stop it since your prevention software isn’t ready for it. That means hackers are, unfortunately, always a step ahead. Plus, in June of 2015, Trend Micro’s chief cybersecurity officer said “the energy sector is woefully unprepared for protecting itself against cyberattacks.” Combine that with the fact that hackers are constantly figuring out new ways to attack companies via the Internet, and the energy industry makes an easy target for new hackers testing their skills or experienced hackers trying new attacks.

Regardless of their motivations or skill levels, the fact remains the same — energy companies are tempting targets for hackers.

The most popular kinds of cyberattacks

On the Internet, you have a lot of resources at your disposal. Information is available at the drop of a hat, and you can reach out to anyone with email, instant messaging, message boards, and other media.

That’s part of what makes it so easy — and affordable — for hackers to attack companies online. 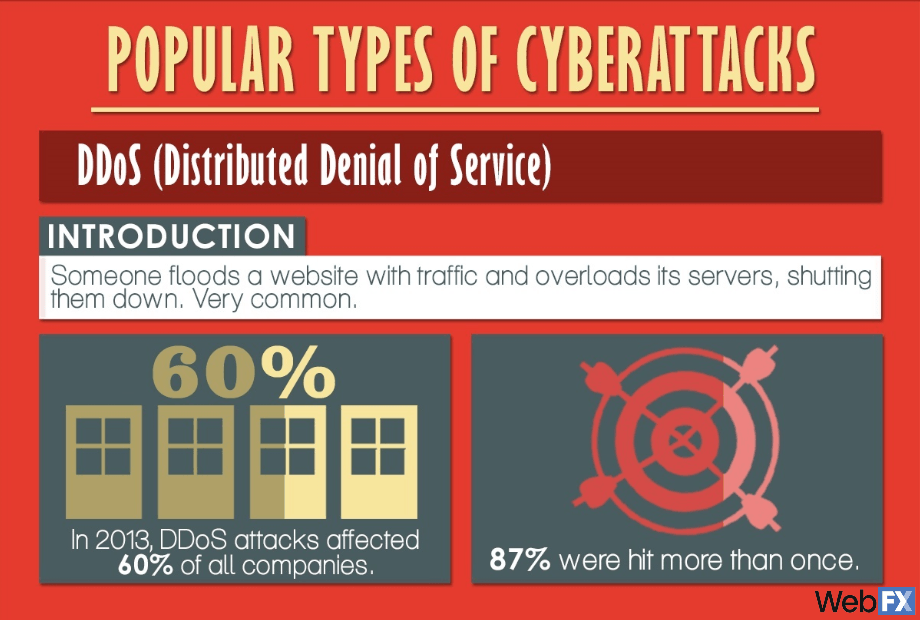 DDoS attacks are one of the most common types of cyberattacks in the world. In 2013, they affected 60% of all companies, and 87% of those companies were hit more than once.

DDoS is used so frequently because it’s so easy. Someone just needs to write a script for bots (or organize lots of like-minded people) to flood the servers of a target. Once the servers are flooded, they go down, and the business can’t operate until the servers come back up.

But bandwidth isn’t infinite. If there’s constantly a huge number of visitors trying to access your site, you won’t be able to get back up and running. It’s just too much for your servers to process. 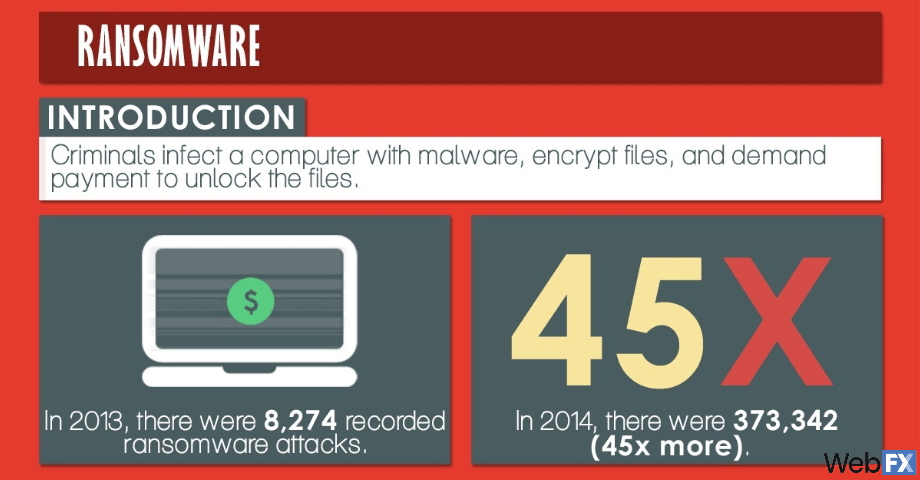 Ransomware is a sophisticated form of cyberattacks, and it has the potential to harm individuals just as much as companies. The idea is that a computer is somehow infected with malware that encrypts valuable files and demands a payment from you to unencrypt them. These files could be anything from family vacation photos to your customers’ credit card numbers.

Either way, you’re in a bad situation. Unless you know an incredibly skilled cryptologist, your hands are probably tied. The most concerning part about ransomware is that it’s on the rise.

The best way to prevent it is to practice good habits online. But even that doesn’t always work. Hackers are getting smarter every day, and that means they’re getting more deceptive. 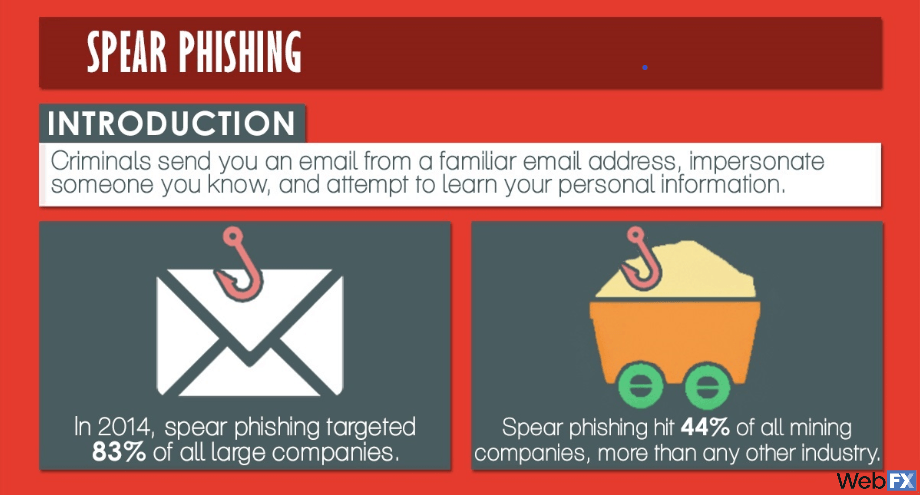 Phishing is the practice of sending people emails with attachments or links that infect your computer and steal your personal information. Spear phishing is a hyper-targeted, steroided version of phishing that looks at your emails, copies addresses you’ve used, and then sends you messages from those email addresses. So if your marketing team regularly hears from the president of your company, a spear phisher would see that, learn your president’s email address, and send you a message from that address.

Then, they’d plant a link or an attachment in the email that you’d open, and without realizing it, you’d infect your computer (and company network) with malware. That malware could open a back door for a hacker to access your sensitive information, shut down your company’s internal communications, or attack your company in any number of other ways. While this hacking style might sound like it’s out of a movie script, it really works.

The most expensive cyberattacks 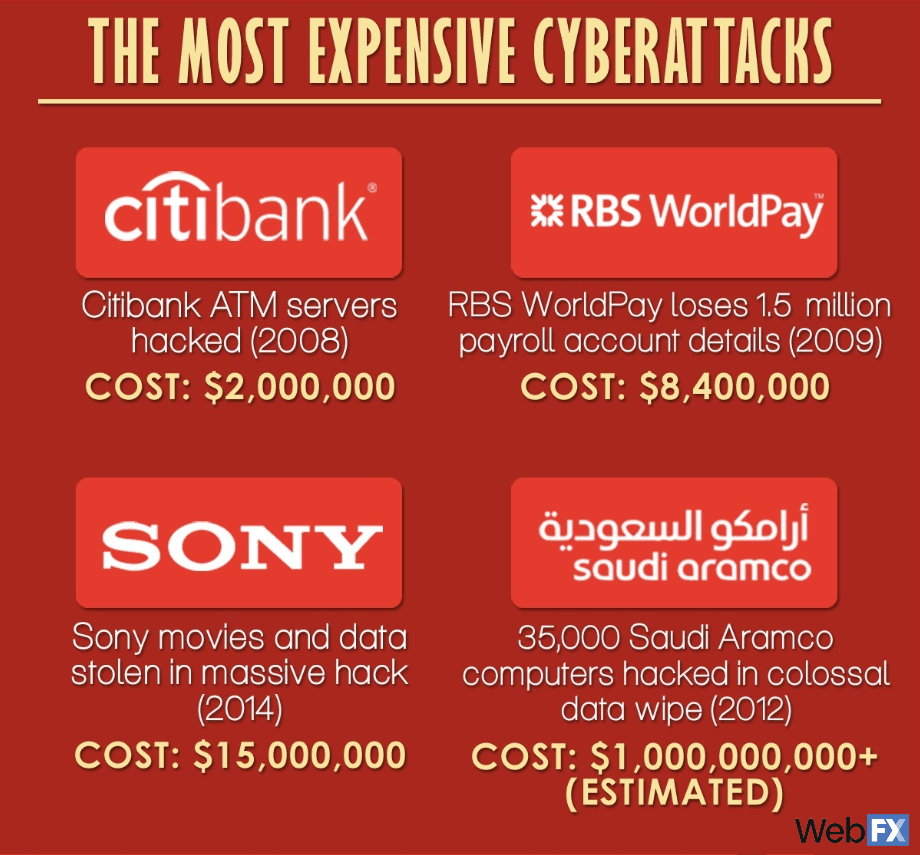 In 2008, a hacker targeted Citibank’s ATM servers and swiped about $2 million from the finance giant. That’s a lot of money, but it’s chump change when you look at other historical cyberattacks. There was also an attack in 2009 where RBS WorldPay lost 1.5 million payroll account details, which lost about $8.4 million for the company.

In one of the most famous cyberattacks of all time, Sony’s database of movies and other information was hacked in 2014, costing the company about $15 million in damages. And, to top it all off, Saudi Aramco was hacked during Ramadan in 2012, essentially setting the company back to 1970s technology. So, for weeks after the attack, one of the world’s most valuable companies had to do business by faxes, typewriters, and hands.

That huge data loss and corporate slow-down amounted to an estimated $1 billion in damages, which hasn’t been confirmed or denied by Saudi Aramco. Since the company is privately owned by the Al Saud royal family, they don’t have to publish those details. 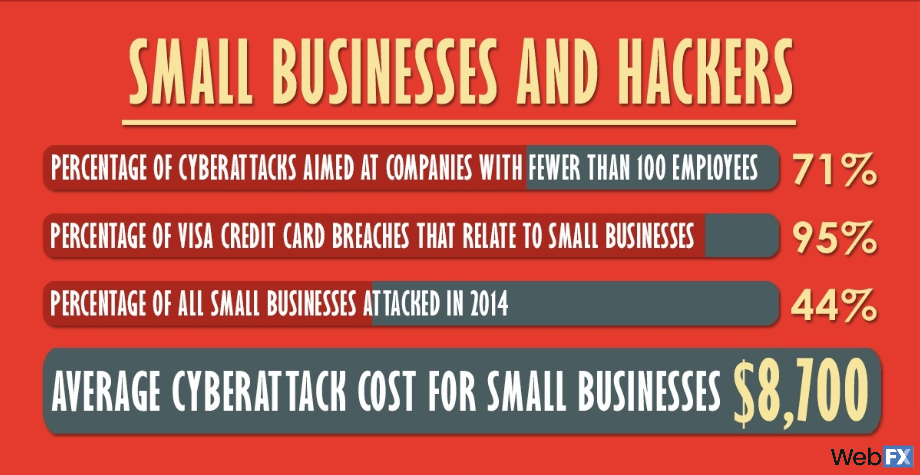 But not every hacking victim is a megalithic, multi-national corporation.

They’re smaller and they earn less — so they have less. While the average cost of a cyberattack on a small business hovers around $8700, that’s still a lot of money when you have a small staff. And depending on how your business is doing, that could be all it takes to shut you down for good.

How to protect yourself and your business from cyberattacks

While hackers are always innovating and trying out new attacks, there are some standard “rules” that you can keep in mind to keep yourself and your business safe from cyberattacks. 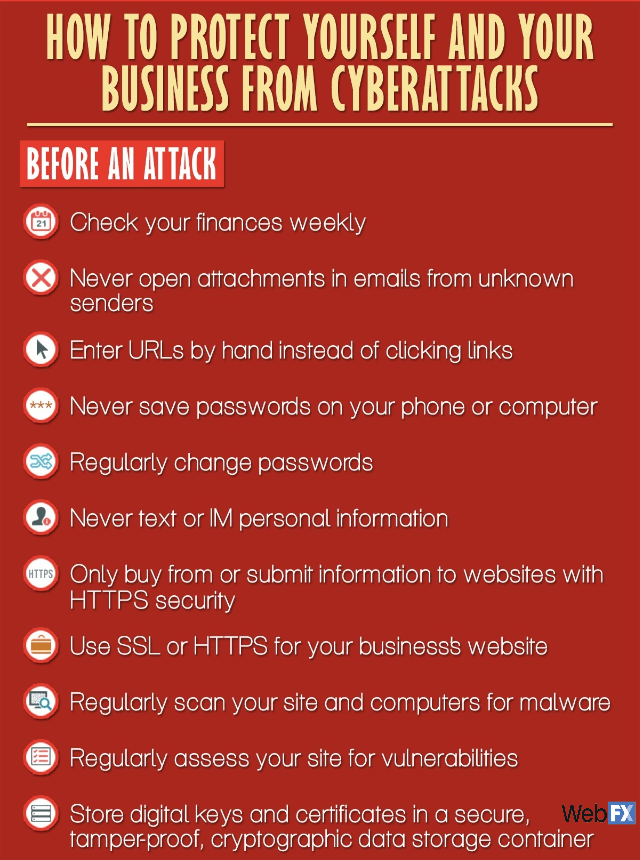 Check your finances weekly. That includes your bank account, credit cards, 401k, and anything else you do with your money. Never open attachments in emails from unknown senders. Even if the message sounds harmless, that attachment is a different story.

Enter URLs by hand instead of clicking links. Like attachments, links can look safe as they install malware on your computers. Don’t click any links an email sends you — instead, hover over the link to see the full address. If you feel comfortable with it, enter it by hand.

Set calendar reminders for yourself to update all of your passwords at least twice per year. Never text or IM personal information. Even if you have an encrypted messaging service, you never know who could intercept or decode your messages. Only buy from or submit information to websites with HTTPS security. HTTPS shows you that a company or person has taken essential steps to securing their website.

While HTTPS doesn’t guarantee against a hack, it does act as a deterrent and a solid line of defense. Use SSL or HTTPS for your business’s website. Since you’re only going to submit information to HTTPS secured websites, it’s only smart for you to use it too. It’ll show your visitors that you’re dedicated to protecting their valuable information.

Regularly scan your site and computers for malware. While some hackers try to stay one step ahead of other companies, most of them will use methods that have been around for years. That means regularly scanning your site and computers for malware will let you catch the majority of cyberattacks and malicious software before it has a chance to do any damage. Regularly assess your site for vulnerabilities. On top of malware, you also need to check your site’s code, security protocols, and other prevention measures on a regular basis.

Set up an anti-virus or anti-malware program to automatically check your throughout the week. Store digital keys and certificates in a secure, tamper-proof, cryptographic data storage container. If you use any kind of digital keys or certifications to access your site, keep them stored somewhere secure. If you don’t trust any kind of encryption with some of your information, you can always store it in an offline container — just make sure you create and track backups.

During and after an attack 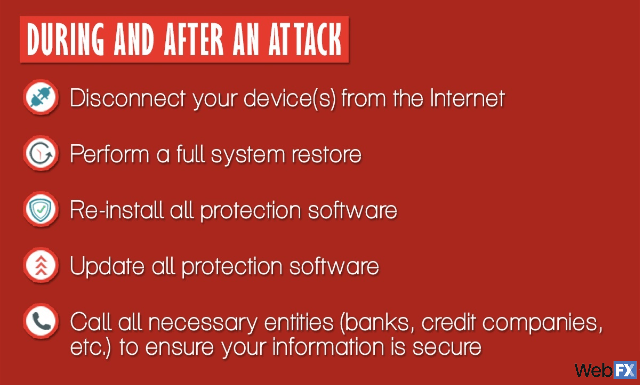 If worse comes to worst and you’re hit by a cyberattack, it’s critical that you react quickly and intelligently. These steps will help you get rid of any malware, worms, or viruses that have infected your systems beyond repair.

After you’ve done all of that, you can concentrate on how the cyberattack hit you or your business and what you can do to prevent another one in the future.

No matter where you work, what you do, or how you behave online, cyberattacks are a real threat. One of the best things you can do is share this information with others who need it!

Use our social buttons and let us know what you think on Twitter!