WebFX has been around for almost 20 years. That means we’ve had nearly 20 full years of satisfied clients — and it also means we’ve lasted through two decades of search engine changes. Since then, we’ve moved our headquarters a few times because we’ve been growing, which is awesome.

Unfortunately, when a company shuffles around like that, there’s bound to be a little confusion — it’s a growing pain of any successful business. To fix that confusion, sometimes you have to dig into the past a few years to get everything up to date. That’s the issue I had to fix over the past several months.

In addition to updating our business listings on third-party sites, WebFX had two listings on Google Maps and Google My Business — one for our old location on Lincoln Street in Carlisle, and one for our correct HQ in Harrisburg. To make things worse, our old listing said we were permanently closed. As you can tell by reading this blog, that is definitely not the case.

On top of that, the correct WebFX listing wasn’t showing on Google because of the bad one.

So for anyone who hadn’t heard we moved to Harrisburg, they’d look us up in Carlisle and see the wrong listing, which said we weren’t around anymore. And it happened pretty frequently — whenever someone searched “WebFX Carlisle.” Clearly, we had to fix that.

But we didn’t have the email address for the false listing, and we weren’t sure who set it up in the first place since our name wasn’t formatted correctly. But eventually, we got it fixed. In hindsight, I should’ve tried that solution first.

But at the time, it hadn’t occurred to me. So if you find yourself in a similar situation, this is what you should (and shouldn’t) do based on my experience.

It frequently sends out tweets about new business initiatives, case studies, AdWords information, and other stuff like that. But the Twitter account is run by Google reps who are willing to help you at the drop of a hat. After about a month of trying different ideas on Google Maps, Google My Business, and Google+, I finally contacted @GoogleSmallBiz directly and told them our problem. 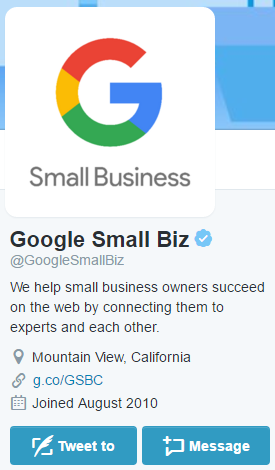 I got a polite response in about 15 minutes… 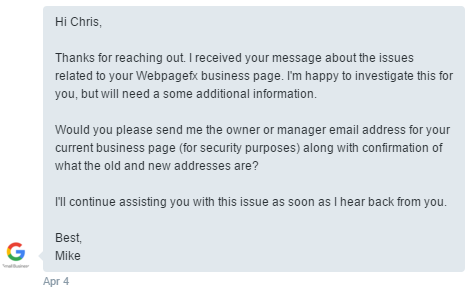 … and the problem was fixed that same day. 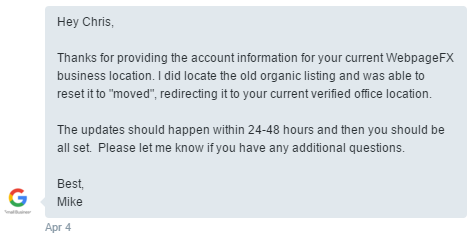 All told, it took about four minutes of typing messages on Twitter.

So if you’re stressing out about incorrect or imitation business listings on Google My Business, all you have to do is contact @GoogleSmallBiz via direct message and explain the situation. Naturally, that was a relief for me. With the changes that Mike made, the keyword “WebFX Carlisle” returned the correct listing for our company with the right address and the proper notation of “Open.” But before I got this issue fixed, I tried a couple other ideas that didn’t work out so well.

Or at all. More like a series of crash-and-burns than anything else.

The journey of 1000 miles starts with a single step, and sometimes that means you trip along the way.

Occasionally, you may also fling yourself down a flight of stairs.

You can directly contact anyone who owns a business listing on Google. So whether you found a duplicate (or incorrect) listing because someone wanted to impersonate you or help other people find your hours of operation, you can talk to them directly.

But it’s up to them to respond. And it’s also up to them to keep an active email address associated with the Google listing. In other words, if there’s an incorrect listing for your company on Google, there’s no guarantee that you can actually talk to the person who created it.

That was the case with this listing, which either had an expired email address listed with it or no email address at all. And Google was good enough to tell me that right off the bat when I first tried to contact whoever owned the listing. So talking to a person wouldn’t work.

Time for plan B.

Google lets users update information on Google Maps with the Mapmaker tool. Once you make a change, it has to be reviewed by Google employees.

You can also suggest edits to a listing in regular search results. 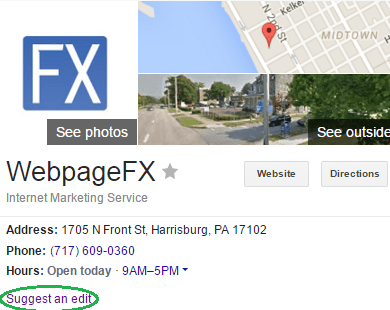 That’s all well and good, but that could take a while. In my case, it took a couple days.

But then I got confirmation emails that my edits had been approved. That was nice, but the bad listing didn’t go away — or change at all, actually. So I tried again and I got the same results.

All told, it looked like Mapmaker wasn’t the answer. So I decided to pull out the big guns.

Falling down the stairs #3: Claiming and verifying the listing (TWICE)

With two big failures behind me, I took a shot at what I thought was my last bet — I had to claim the listing.

But you can’t just claim a listing that isn’t yours. That’d turn Google Maps into a miasma of poor sportsmanship, misinformation, and underhanded competition tactics. Instead, you have to verify that you’re the listing’s true owner.

You can do that one of two ways — a phone call or a postcard. The phone number that was associated with our old listing was still active at our new location. But for whatever reason, Google wouldn’t allow me to get a verification code over the phone when I tried.

So I had to get the job done the old fashioned way — through the mail. To Google’s (and the United States Postal Service’s) credit, it only took about a week to get the postcard.

But once I tried it, the verification code gave me access to the correct listing of WebFX — which I could already access anyway.

I’m not perfect though. I figured I clicked the wrong listing and got the wrong postcard. So I requested a second postcard, and I was über-careful to click on the bad listing.

This took another week, and it gave me a different verification code. I typed in the code, and again it forwarded me to the correct listing for WebFX. After all that trial and error (not to mention wasting 98 cents of Google’s money on postage), I was out of ideas.

So I took one last shot in the dark and contacted @GoogleSmallBiz. And after about a month of failure, a Google rep professionally handled my request. Everything was fixed and updated by the end of the business day.

The moral of the story

If you can’t figure out how to fix something on a Google property, find the corresponding Twitter account and DM them. It might just save you four weeks of waiting.

Have you had to correct Google listings before?

Have you ever had to re-work a business listing on Google?

How did it work out, and what did you try? Let me know in the comments!