Analyzing 34 million searches for (not provided)

Google’s move to encrypted SSL search for logged-in users in October of 2011 was a major change for both the search giant and online marketers who rely on unencrypted search data for monitoring their campaigns. While the move to SSL was much analyzed at the time, the lasting impact on marketing data is still being felt. In fact, since Google announced encyrpted search, major web browsers (Google Chome, Firefox and mobile Safari) have all moved to SSL search by default, further lowering the number of unencrypted searches.

Marketers now see a large chunk of keyword searches showing up as “(not provided)” where there used to be specific search keywords that were driving traffic to their websites. When encrypted search for logged in Google users began rolling out in 2011, Matt Cutts said that the change would only impact a single digit percentage of Google searches. Within days of that announcement, reports started surfacing of sites seeing keyword data showing up as  “(not provided)” climbing well into the double digits.

At WebFX, we work with and track over 600 sites in Google Analytics. This massive data set provides a great tool to do a proper analysis with hard numbers on the rise of (not provided). I’ve wanted to dig deeper into this issue for a while now but there aren’t many easy ways to pull keyword data from hundreds of sites quickly and efficiently.

After watching a video tutorial or two, I knew exactly what I was doing and was able to use Analytics Canvas to pull in every keyword and the number of monthly visits for 13 different months over the last 2 years. There were usually a few million rows of data for each month and it took around 25 minutes for the API to chug through all 600+ sites. In total, I analyzed 34,615,110 visitors in just a few hours. What I was left with after some number crunching was the total number of organic search visitors for every site that we track and the number of (not provided) visitors.

On to the pretty graphs… 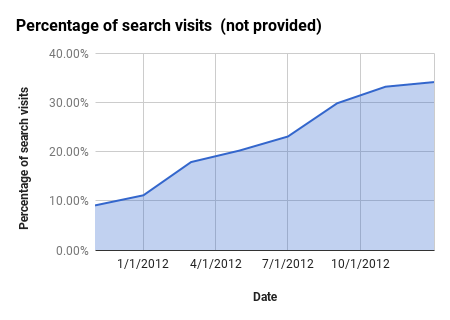 All told, WebFX and our clients have lost keyword data on 6,916,436 searches since Google launched SSL in 2011. A few other notes on these graphs: While certain industries (SEO, digital marketing/media) have been hit especially hard by (not provided), we work with hundreds of clients in many different industries.

Some of our more popular niches (industrial equipment, outdoors) aren’t markets that are particularly tech savvy. Our clients represent a pretty even view of the broader web. (For the record, (not provided) was at 53.5% for WebFX.com in January 2013.) (not provided) searches did originally start out in the single digits as Google predicted, but has very steadily climbed to over 30% in 2013. With many popular browsers switching to SSL, it’s possible that logged in Google searches are still between 10-20% though. Usually graphs that are “up and to the right” are the types of graphs we like to see, but that is certainly not the case for (not provided). The trendline is very clear and as more and more people upgrade to new browsers, the number is only going to go up.

It won’t be much longer until (not provided) keyword data climbs to 50%. While the initial uproar over (not provided) was loud, the marketing community hasn’t been as vocal recently as the number of encrypted searches moves closer and closer to 40%. This continues to be a huge issue and I hope this encourages others to publicize their data as well.

Regardless of how many of your search visitors are being dumped into (not provided), there are some steps you can take to make some sense out of this keyword data. As the number of encrypted searches increases at a high rate, being able to adapt and find other data sets to use is doing to become increasingly important.

View the landing page for (not provided) keywords

AJ Kohn has a great guide on how to do this.

Though the accuracy of these figures is often debated, Google does provide some keyword specific data in Google Webmaster Tools. You can view impressions, clicks, click through rate and average position. When coupled with Google Analytics data, this can go a long way to filling in the keyword gaps left by (not provided).

This might sound crazy, but most experts agree that their isn’t much difference between search behavior for those who are using SSL and those who aren’t. The number of visits may fluctuate due to (not provided), but there are plenty of other metrics out there that you can focus on: conversion rate, bounce rate, time on site, etc. (not provided) can make it a lot tougher to figure out potential issues and flags with your online campaigns, but — at least for the time being — there is still a decent data set of provided keyword data to work off of.

Let this dictate your keyword focus in the meantime.