If your business markets to a young demographic, you’d be wise to look into the microblogging platform. Tumblr hosts 200 million blogs, which post a collective 80 million posts per day. If you count both registered and unregistered visitors, the site gets 300 million unique visitors per month.

That being said, simply creating an account likely won’t be enough to get users to find you. Doing SEO for Tumblr can be a huge help, and can help you build a strong following of potential customers.

WebFX is a full-service Internet marketing agency that offers custom SEO campaigns for your business.

check out our seo packages and pricing

How does Tumblr work?

If you’re completely unfamiliar with Tumblr, it’s a microblogging platform. That means that users can post text, photos, videos, and other content to a short-form blog. They can also follow other users and see updates in a news feed much like other social platforms.

Microblogging has gained popularity over the last few years, as people don’t want to deal with the hassle of setting up a blog and then finding ways to promote it. Instead of sharing links to posts on other sites, users’ posts are immediately shown to their followers.

Another important distinction to make is that unlike many social platforms, Tumblr is more about self-expression than it is about connecting. Yes, Tumblr connects users. But a user’s Tumblr provides a more detailed snapshot into his or life than a profile, as they post videos, content, images, and memes that resonate with them.

For users who are only on the platform for personal purposes, creating and curating content is the only goal. But if you want to use it for marketing purposes, you’ll need to put in some work to make sure that people can actually find it. That’s where SEO for Tumblr becomes important.

The advantage of working with Tumblr

Aside from the fact that it can allow you to reach a young demographic, Tumblr has the advantage for marketers of dofollow links. If you’re unfamiliar with the term, it means that links from Tumblr carry SEO value—which isn’t the case for many social sites.

Platforms like Facebook and Twitter automatically make all of their links nofollow. This means that while they look and function like regular links to users, they do not have any impact on your search engine rankings. 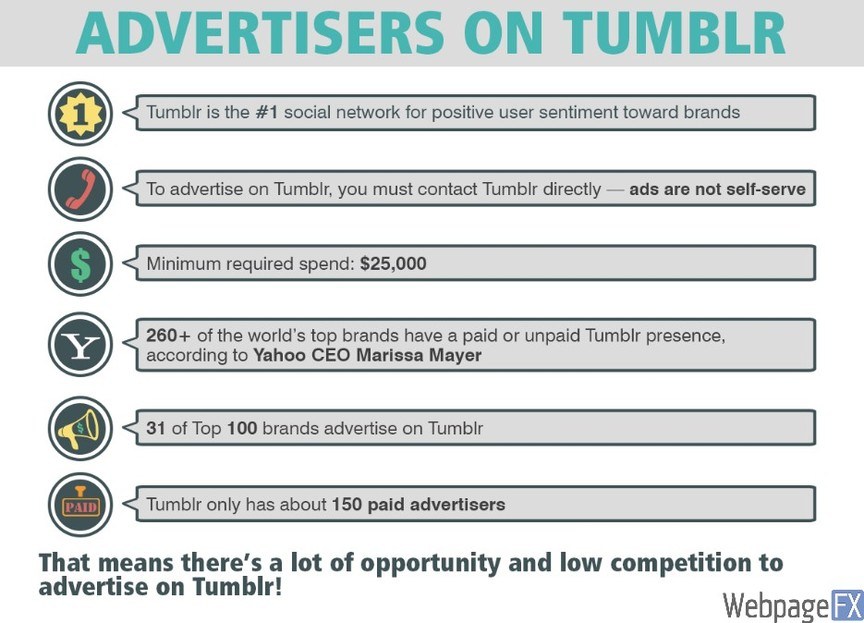 This means that posting links to your site on Tumblr could potentially boost your rankings in search engines. And not only that, but users can “reblog” posts, or post them to their own page, which means you can have dofollow links on a variety of Tumblr blogs. This can lead to a great deal of exposure for your website.

click here to see the entirety of our infographic on why tumblr matters to marketing!

3 tips on SEO for Tumblr

While Tumblr’s dofollow links do offers a unique advantage, it doesn’t offer all of the built in tools for on-page SEO like Wordpress and other popular platforms. This means that you’ll have to do a little bit more of the work on your own.

So how can you get started?

Much like a regular web page, each post you make on Tumblr has an individual title tag. By default, it will usually just be the first few words of your post. In order to increase the chances of your posts and Tumblr being found in search engines, customize these title tags much like you (hopefully) do on your regular site. Over 90% of WebFX clients continue partnering with us into year 2 of their campaign.

Speak with Us Today!

The default URLs for your Tumblr posts will be long strings of numbers, which isn’t ideal for SEO. By clicking the gear-shaped icon in the top right of the post creator, you can create a custom URL for each individual post. Format these much like you would on your regular site as a best practice.

I mentioned earlier that Tumblr’s links are dofollow, even on other users’ blogs. Because of this, it will benefit you to have as many people as possible reblog your posts and share them with their own followers.

The best way to do this is to spend some time getting to know your audience. This will make it much easier to meet their preferences and make them want to share your content with their friends and followers.

As you work on your company’s Tumblr blog, there are a few other considerations to keep in mind. Although these won’t necessarily directly impact your SEO, they will certainly be useful in building a following. This can lead to more reblogs, which will affect your SEO.

Many Tumblr users find new content with the site’s built-in search function. This can be a great way to get found, as long as you properly tag your posts.

Unlike search engines like Google, Tumblr does not use advanced algorithms to deliver search results. Instead, it relies on the tags users put on their posts. Because of this, adding tags to your posts can be extremely effective in getting new users to see your content.

That being said, make sure that they are actually relevant. If you’re a tech company, don’t just tag your posts with words like “cats” or “pizza” just because you think Tumblr users are searching for them. They are, but you’ll only irritate the users who are shown your content when looking for something completely different.

Don’t go overboard with SEO on Tumblr. This might sound strange coming from a page written entirely about optimizing on the platform, but keep in mind that it should be used to connect with users and generate brand awareness. While it can be useful in attracting new customers, you won’t do yourself any favors by focusing solely on keywords and tags.

Instead, focus on providing interesting and useful content. This is more in line with Tumblr’s style, and will help you build a following.

Are you ready to start an SEO campaign for your Tumblr blog?

Although Tumblr is very different from other platforms and will take some getting used to, it is certainly worth looking into. Its young demographic and dofollow links present unique value to marketers, and with the proper SEO for your Tumblr, you can attract new customers and clients.

If you’re thinking of starting a Tumblr for your company, or already have one and just need help optimizing it for search engines, feel free to contact us! Our talented team can help you start using the platform to generate brand awareness and reach an entirely new audience today.