SEO is in a constant state of flux from one day to the next. Search is constantly changing with the hundreds of updates that Google implements (from the thousands they test) each year, as well as a number of updates from other search engines like Bing. So now that we’re in 2016, what are some of the concerns that we, as marketers, have to worry about?

In a lot of ways, we have to keep doing what we’ve been doing — creating great content, promoting our websites, and engaging our visitors. But we still need to keep an eye on the changes within our industry. Here are three huge SEO concerns going into 2016.

This is probably the #1 problem facing Internet marketers. The phrase “content is king” has been around for a while now. Practically everyone has heard it, and almost every company that wants to stay competitive online has launched some kind of content marketing strategy.

But there’s one big problem with that — there are only so many people in the world, and they only have so many hours in a day. As a result, companies are fighting for the attention of their main customer demographics. This effect is called the attention economy, and it treats your customers’ time as valuable currency that your business needs to succeed.

A good parallel to content saturation is ground saturation. During a heavy rain, the ground can only soak up so much water before it becomes saturated and the rest of the rain flows away as runoff. Similarly, your customers can only absorb so much content before they begin to ignore the rest.

That makes the competition for successful content marketing incredibly high. You and your competitors constantly up the ante with every new piece of content you publish. That means you have to make every page count.

It also means you have to search harder for keywords that your competitors aren’t targeting yet. They’re still out there — it just takes a lot of digging to find them — and once you have a few keywords that are unique to your site, you have the advantage of first dibs on any potential customers looking up that topic. Still, nothing lasts forever.

It’s only a matter of time before your competitors find that you’ve targeted a new keyword, and once they know about it, they’ll target it too. Likewise, you should regularly research your competitors to see the content they’re creating. And if they’re targeting a keyword that you aren’t, you can create your own content with a new angle on the topic.

But regardless of what you do, the sheer quantity of content that’s on the Internet is staggering, even in niche industries. To stay on top, you need to create unique, in-depth content for all of the keywords you target. In an environment where the quantity of available information is already staggering, the only way to stand out is with quality.

Unlike the last two items on this list, this quality isn’t necessarily bad. In fact, if you’re starting a new website right now, this could actually be a huge help to you. Google has steadily lost market share over the past several years, and that’s good news for Bing, Baidu, Ask, and other search engines.

But it’s also good news for companies that want to succeed online. For the past few decades, Google has been responsible for quality standards and search factors almost exclusively. Now, they have some actual competition.

And while Google still controls 65% of the market at the time of publication, Bing, Yahoo, and the others have a lot of opportunity to grow. So if you’re starting a new website, you don’t need to focus exclusively on Google, especially if that’s not where your demographic searches the most. Instead, you can spend some time getting familiar with Bing’s standards.

This is especially useful if you’re marketing a company that wants to attract customers from the US. Most Bing searches come from Internet Explorer — Microsoft’s web browser — and they’re almost all American. Plus, Bing Ads is a less popular advertising platform than Google AdWords, meaning there’s less competition and more affordable cost-per-clicks in PPC campaigns.

Translation: Bing is the affordable, localized, niche version of Google. If any of that describes your marketing strategy or your primary demographic, then Google may not need to be your first priority!

This isn’t a direct SEO concern — it’s more of a concern for the tech industry as a whole. But considering so many SEO agencies and so much SEO data relies on startups that develop proprietary software, it’s concerning to think that we could all lose our favorite tools for the job. The Internet marketing industry has been swept up in the tech startup bubble in general, and there are hundreds of companies that provide solutions to content marketing, SEO, PPC, analytics, and SaaS (among others).

On top of that, most of those companies haven’t even hit the five-year mark. So the tech bubble is a concern for SEO in general. And there’s one very good reason.

In 1992, renowned economist Hyman P. Minsky hypothesized that five major events occurred in the life of a financial bubble.

Displacement describes the sudden upswing in popularity of a new technology — in this case, startup tech companies. Boom refers to the sharp increase in market participants. Along with that comes increased speculation and investment, spawning a market-wide fight for venture capital.

Euphoria occurs when companies are evaluated to be worth more than their combined assets. To compensate, experts create theories for why these under-developed companies are so valuable. Profit is the phase when early adopters of the bubble start bailing.

They sell their assets, collect big, and start looking for the next big thing. Finally, there’s panic. This is when asset prices fall like a sack of bricks.

Everyone tries to offload their investments and at least turn some kind of profit, which spurs similar behavior and eventually destroys the market. Now, let’s apply that theory to the state of today’s tech startup industry. This is important to marketers because a lot of the tools and recent industry innovations have come from tech startups.

If the industry goes under, what does that mean for your digital strategies? If you lost Buffer, do you have another way to schedule social media posts? If you lost HubSpot, would you have a backup lead management or marketing automation system?

It’s important to consider these questions now while there’s a lot of product and company variety in the Internet marketing industry. If we’re in the middle of a bubble, is it about to burst? First, displacement has certainly already happened.

Mobile and cloud-based technologies have absolutely exploded over the past five years. Boom has also already occurred. If you want to see the sheer quantity of new tech companies for yourself, check out our infographic on American startups and AngelList.

Euphoria has also happened. Was Instagram really worth $1 billion before it was even monetized? Is Uber worth $40 billion when it works on a contributor-based transportation model?

And is Snapchat more valuable than SpaceX? Using the same information from Wall Street Journal, its list of 100-some startups has a combined valuation of more than $500 billion. For reference, if that group of companies were its own country, it would be the 28th wealthiest country in the world by GDP.

So yes, the period of extra-high profit and valuation has already passed (those companies probably aren’t worth as much as Norway). Big-cost players like WhatsApp ($19 billion), Nest ($3.2 billion), and Instagram ($1 billion) have already exited, and their founders have already profited handsomely as a result. Panic is the last stage.

This is when speculators and investors cash out en masse, resulting in a colossal market crash that only leaves a few survivors dominating the industry. That crash is the result of a high amount of supply with a low amount of demand. That yields low asset prices and lower valuations with a shrinking customer base.

That intense disparity isn’t sustainable, and in a matter of months, entire markets can be reduced to a handful of companies. But before that happens, we’d need to see something like the dot-com bubble of the early 2000s where stock prices of market leaders suddenly plunged. That hasn’t happened yet.

4, 2016 was a significantly bad day for the stock exchange, and specifically for the tech industry as Yahoo! announced abysmal quarterly numbers. Even five days later, a lot of tech startups — like SaaS — showed some rough numbers.

But that’s just from February 9. One day isn’t a good indication of a whole market’s decline, right? That’s why it’s important to take a bigger picture look. The graph below shows the stock prices of the above companies from Dec. 30, 2015 to Feb.

9, 2016. In a matter of months, all of these companies collectively lost about 30% of their total value.

It’s always possible the market could rebound. Some of these companies are major industry giants, and in all fairness, they experienced a slight rebound over the past weeks.

But for reference, this is what the dot-com bubble burst looked like. 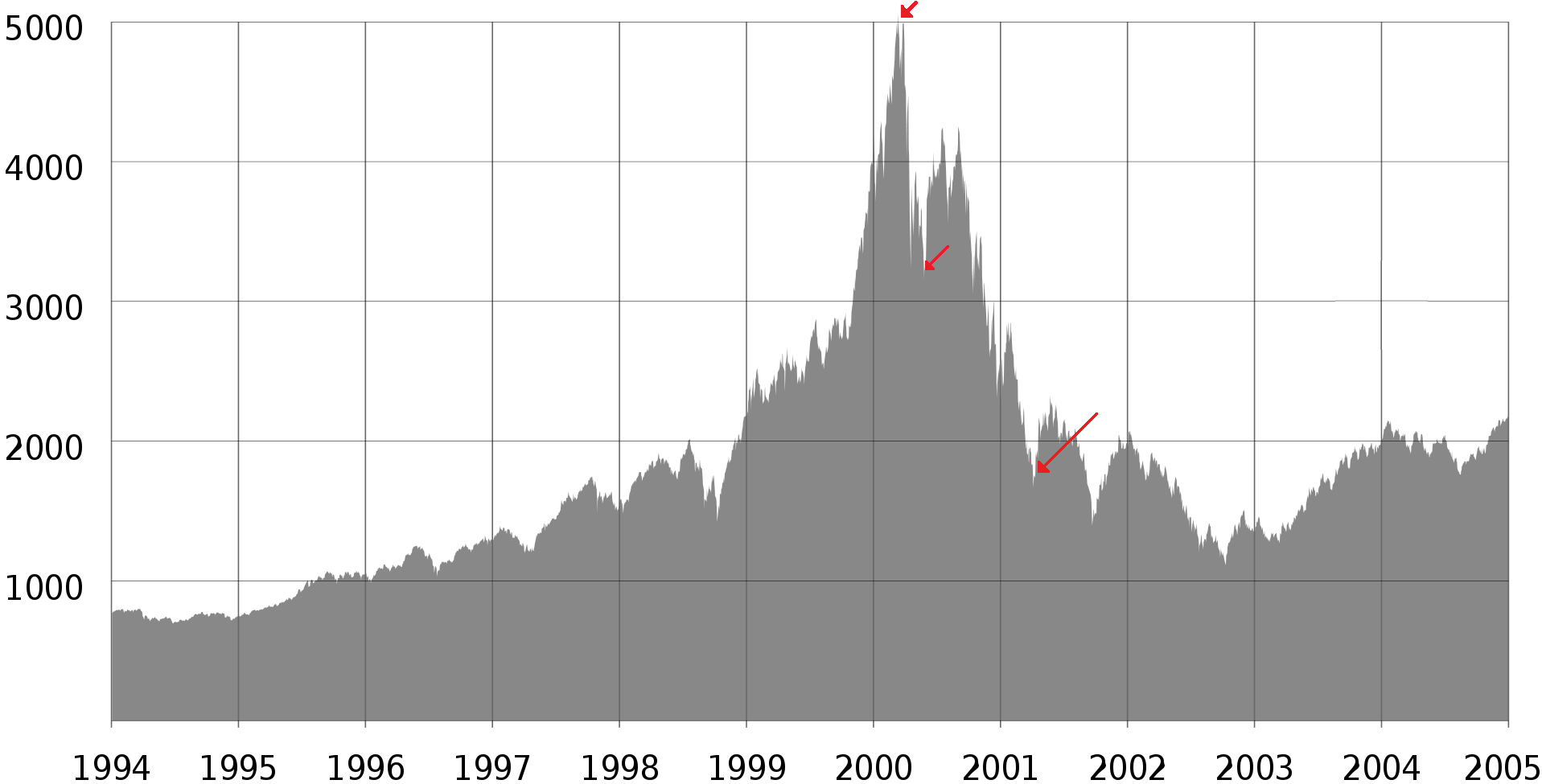 So there are two possibilities. Maybe tech stocks aren’t doing well in February.

Or maybe the tech bubble is about to pop.

What are your marketing concerns?

Are you concerned about your marketing strategy in 2016? What are some issues and potential fixes?