What Are Interstitial Ads (and Why Does Google Hate Them)?

By Trevin Shirey  ~ 5 minutes to read
Trevin is the VP of Business Development at WebFX. He has worked on over 450 marketing campaigns and has been building websites for over 20 years. His work has been featured by Search Engine Land, USA Today, Fast Company and Inc.

Starting January 10, 2017, Google will penalize websites that use prestitial and interstitial ads. That’s big news in the SEO world because lots of websites use interstitials to advertise their products, generate leads, and push sales. But now it looks like interstitials are going the way of old-school popups.

Using too many of them — and maybe using them at all — is just too annoying to users. If you want to maintain your rankings in 2017, you may have to cut your site’s interstitials. But what makes something an interstitial?

And why does Google hate them so much? We’ll answer both of those questions now.

Interstitials are on-site popups that force users to see an ad before they can see the content they want.

Sometimes interstitials appear before a page loads (called “prestitials”), sometimes they appear as a page loads, and sometimes they appear as users scroll. You’ve probably seen one before, and you may even use them on your own site. But in case you haven’t, you can see a great real-world example of an interstitial from Forbes, one of the highest-ranking websites you can find on Google.

Forbes (and other companies) use interstitials to push content, products, or services to the forefront of a user’s experience. So let’s say you found a great article from Forbes in a Google search for “SEO news.” When you click the link, you won’t actually go to the content you want — you’ll go to the screenshot above. That adds another (pointless) click to your experience, which is irritating in the age of free, lightning-fast information.

This is especially annoying on mobile, where users have set data limits and have to spend that data loading ads for things they don’t want. It also makes mobile sites much harder to navigate, and in general it provides a poor user experience. In real life, interstitials would be like if you walked into a Target and you knew you wanted to buy a shirt, but a sales person stopped you to talk about new DVDs.

Which brings us to our next question…

Why does Google hate interstitials so much?

Google hates interstitials because their users hate interstitials. Google has thousands of tech-savvy employees who use phones to find information. They’ve encountered interstitials before, and they know how irritating they are — especially when they make content less accessible.

Google has already provided a diagram of the exact kind of ads they’re going to target with their new update. 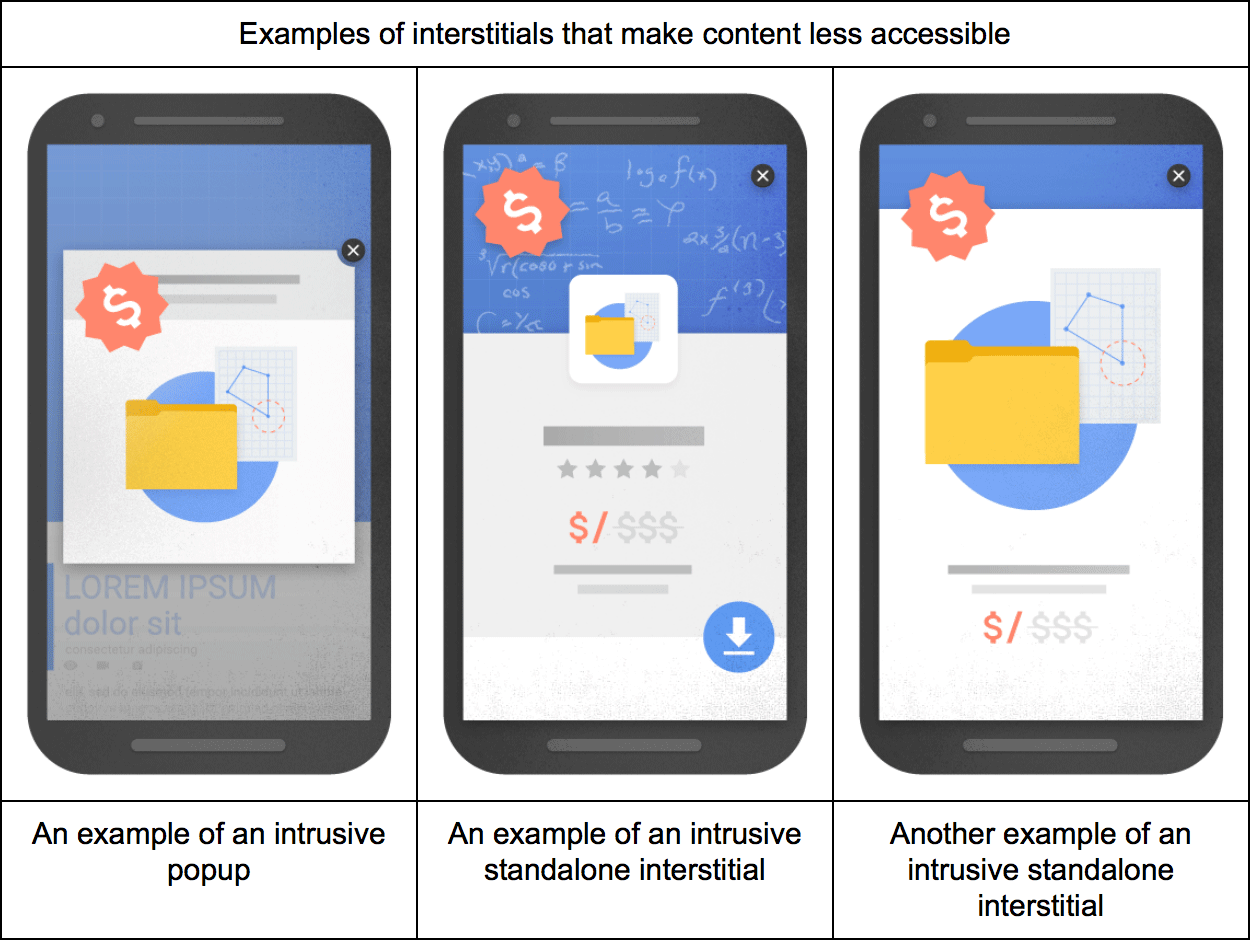 This diagram shows that Google is serious about cracking down on interstitial ads. They’re not just going for the full-screen, block-the-whole-page kind of ads — they’re also targeting small interstitial popups.

From a user’s perspective, this makes perfect sense. Nobody has ever actually liked popups on websites, dating back to their first use in the 1990s. They first came from Ethan Zuckerman of Tripod, who literally apologized for inventing them.

Recently, popups have also been the target of ad blockers, which prevent any ads from showing in web browsers. The popularity of ad blockers over the past few years was an indication that Google would make this change at some point. According to PageFair, ad blocker users increased by 117% from January 2013 to January 2014 — and they’re still on the rise.

And — of course — Google has noticed a sharp increase in general interest in ad blockers. So to make a long story short, users hate advertisements — especially interstitials.

Google makes almost all of its income from advertising. So why would they target another form of advertising? Google’s foremost dedication is to their search product.

By extension, that means they have to be dedicated to their users. If Google’s users aren’t happy with search results, then they won’t continue to use Google Search for information. That’ll decrease Google’s clout with advertisers, which will drive ad prices down, and the company will consequently lose profit.

So if Google wants to break $100 billion in annual revenue, it’s actually more profitable for them to demote sites with interstitials than it is to endorse that form of advertising. There’s still no word on how interstitials will be treated for PPC landing pages. But if it’s anything like organic, you can probably expect an update to AdWords that stipulates no interstitials.

What’s the safe way to promote content on your site?

Google is about to take down interstitial users. But that doesn’t mean you can’t push ads on your site for your products. If you want to be safe, you have a few options:

As far as Google has shown, these ad formats are in no danger of the interstitials update.

There may be future updates — like crackdowns on auto-play video ads — but only the most disruptive forms of advertising are actually in danger.

What you can do to prepare

If you want to keep your good standing with Google, get rid of any disruptive ads. You can identify “disruptive” ads with a few criteria:

This isn’t an exhaustive list of criteria for a “disruptive” ad, but if you said “yes” to any of these questions, your ad is disruptive.

The easiest thing to do is to get rid of it, which is kind of a bummer. You (or someone on your team) probably spent a lot of time and / or money on that ad, and now you have to throw it away. The only saving grace is that it might earn you a final few dollars before January.

Your thoughts on interstitial ads

What do you think about Google’s newest algorithm crackdown? Do you have to clean interstitials out of your site? Let me know in the comments!