Is Google A Search Engine or A Sales Engine?

By WebFX Team  ~ 2 minutes to read
The WebFX team is made up of more than 450 subject matter experts in digital marketing, SEO, web design and web development, social media, and more. Together, they've helped WebFX's clients earn more than $3 billion in revenue from the web — and that's just in the past five years.

There’s a disturbing trend forming in the Internet marketing world. For the last few years, Google has been building a path to help big brands and to crush medium to small businesses out of the search results. February 2009 saw the Vince update – Big brands started getting a boost in search results.

Vince helped big brands to rank very well, which no doubt improved their revenue while small to medium businesses lost a lot of business. Could this update have been the start of the job losses or did this change just increase the jobs for big brands? Well, we will never know.

September 2010 saw the Brand Update – Google allowed the same domain to appear multiple times on a SERP. Meaning if you want to target your competitor’s brand name as a keyword, using Adwords would be far more successful than doing it organically. Google = money making machine, I tell ya!

These changes meant medium to small businesses needed to build their brand name in Google to be able to challenge the big brands. How would someone do that? Here are some examples:

October 2011 Google announced the SSL encryption. What does this mean?

In simple terms it means that SEOs won’t be provided with any encrypted analytical data and maybe PPC experts will be provided with everything they wish! So it will look something like this: 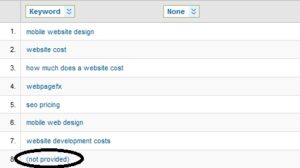 The first 7 keywords generated through PPC and at 8 we have traffic generated through SEO but no idea which keyword was used. Maybe Google is saying if an SEO company desires to view that data, they will need to sign up for Google Analytics premium, which will cost around $150,000 (USD), £90,000 (UK) or $150,000 (CAN) per year.

Another option would be that an SEO company changes their focus from just being an SEO company to a full-service Internet marketing company and offer PPC to help Google make more money! Image: Google’s stock share price

All SEOs rely on the organic keyword data to evaluate which keywords are performing against the keywords that aren’t. If you take that away from them, the campaign won’t be an effective one as they won’t know which keyword will bring the greatest ROI for the client.