Ecommerce Psychology: What’s the best strategy for displaying the price of products?

By WebFX Team  ~ 6 minutes to read
The WebFX team is made up of more than 450 subject matter experts in digital marketing, SEO, web design and web development, social media, and more. Together, they've helped WebFX's clients earn more than $3 billion in revenue from the web — and that's just in the past five years.

There is reasoning behind every decision you make when it comes to designing your company’s website. Most of these decisions should be made with a little psychological consideration. One frequently overlooked decision for ecommerce sites is whether or not to display the price of your products and how to do it.

Let’s dive into the psychology of pricing to make sure your price tag is in the right place.

One route to take is comparative pricing – comparing your price with your competitor’s price. The misconception with comparative pricing is people always go with the cheapest option. This isn’t always the case so choosing this route may be riskier than you think, according to a study done at Stanford University.

When the marketer states the comparison, people tend to make explicit comparisons and become more cautious, resulting in fewer purchases. Instead of comparing prices, try comparing strengths and quality.

Try putting reviews or testimonials near your prices so people see what they would get for the money they spend, like the example below from Target. 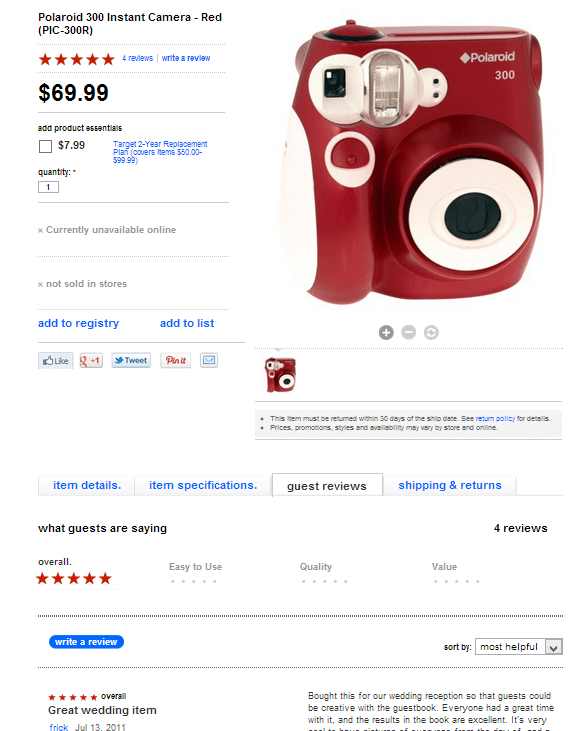 A recent study from Stanford suggests that consumer happiness is found in the personal connection they feel with the product – the time they spend using/enjoying it. This connection leads to a more favorable attitude, which leads to more purchases. Think about it like this: money is something that we can get back.

We can make more money but time is finite. Time is more of a scarce resource and has more meaning to consumers. So, rather than promoting your price, try to portray a positive social perception on your site and give them the gift of time.

Give the customer three options and they go from a bargain hunter to a value hunter because they see what they are getting in comparison.

Comparing your own prices is different than comparing your competitors because you are giving them the same name and quality, making it an easier comparison. Here’s an example: 1. Phone charging cord for $10.00 2. Phone cord wall adapter $15.00 3. Phone cord and wall adapter $15.00 Who would buy number two when you could buy number three for the same price? This is when the switch happens and your customers begin looking at the value.  Gaining a customer who is a value seeker is a smart move because they are goal oriented; they came to your site to reach a goal and they aren’t leaving until they are done.

They need that phone cord and they are going to look for the best value. In this case, it’s option three. If the price wasn’t displayed that way, they may not see you as presenting a valuable purchase.

You have to show them why yours has the most value.  Had you taken away option two, they may have convinced themselves that they didn’t really need a wall adapter (bargain hunter) and they may have continued on to other sites to find a better priced charging cord. By showcasing all three options, you are giving the customer a comparison that makes one option more desirable. This is similar to the “frequently bought together” strategy that you see on Amazon and similar sites.

Here’s an example of why it’s a good idea to group items together and showcase what you are offering.

The same idea is true even when the options are not combined (like number three), but when the options are similar products but different qualities. When offered three types of beer on a menu (cheapest, middle, most expensive premium), 80 percent of people will choose the middle beer. Most people don’t want the cheapest option because they associate it with being inferior or not as good, and they don’t want the most expensive option because they can save money.

So if you have three similar products, list them by price and it will be seen as quality. The majority of your buyers are going to go for the middle option, so make it one you want them to buy.

Pro Tip: Knowing that people prefer the middle option when given 3 tiers or prices, engineer your profit margins so that the likely choice provides the most profit for your business. One thing to remember is not to overwhelm them.

You want them to see which one is the best choice by giving them a few options, but you don’t want to give them too many that they get confused and leave your site. Think of Goldilocks and only give them a few options to try until they pick the one that is just right. Here’s an example from BestBuy.com where they feature three different headphones.

They all do the same thing, but at different prices and quality.

The wording you chose to go with your prices can make a world of difference in the mind of some consumers. When you spell it out, it may not seem like a big deal, but studies show that the language on your ecommerce site can convince customers on the edge to make a purchase.

Instead of saying “a $10 fee” try saying “Only a $10 fee” or “a small $10 fee”.  Break things down into the smallest amount possible. People are more likely to purchase something that costs $50 a month rather than $600 a year. One popular way of breaking down the amount is to make it relatable to consumers by comparing it to something that they frequently purchase.

You often hear somebody suggest that you can buy a particular product for less than the price of your morning coffee, for example. The psychological pricing theory is the idea that certain numbers in a price have a psychological effect on the consumer or buyer.  This is because consumers seem to consider the cents as insignificant, disregarding them in their decision process. In retail we normally see odd prices more than a round number.

When something is $5.99, consumers associate that with $5 rather than $6. When we see prices ending in 9, we see them as a value  and value seekers love .99! (Remember, we want value seekers!) Your numbers also count in terms of your SEO tactics. You want your site to be as searchable as possible.

Putting prices and wording that can be search terms is a good strategy for web developers because a lot of companies leave the prices off of their websites or out of reach for search engines. The way you choose your pricing depends on your products and what you are hoping to accomplish. Start with picking a few products and test out the various ways to promote their prices, track which ones are more successful and use those methods.

Remember that you want to keep them on your site long enough to realize your price is the best value so they buy from you now, and remember you for next time.