How to Use SEO to Promote Your Business Internationally

By Trevin Shirey  ~ 8 minutes to read
Trevin is the VP of Business Development at WebFX. He has worked on over 450 marketing campaigns and has been building websites for over 20 years. His work has been featured by Search Engine Land, USA Today, Fast Company and Inc.

International SEO is one of the best ways to expand your business — but only if you’re prepared for it. Without the right strategy, it can end up a waste of time. This is how you can make sure your business is ready for the leap abroad.

Before you can target a new country, you should research which ones have already shown interest in your business. You can do this pretty easily with Google Analytics. Just go to Audience > Geo > Location.

Then, scroll down below the map and find the list of traffic stats for individual countries. 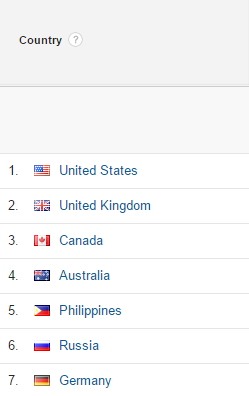 At WebFX, we have a decent amount of traffic from other countries, even though we only operate in English. Still, our top four countries all speak English, and it’s pretty well-known throughout the world.

With that in mind, it’s not too surprising that we get traffic from Philippines, Russia, and Germany as well. You probably get some traffic from other countries too, even if you’re not trying. Now that you know which countries have visitors coming to your site, you can start targeting them by researching keywords in those countries.

The tools you use to do that are ultimately up to you, but SEMrush is probably one of the best — even if you’re using the free version.

Just look up the keywords you want to use like you would in AdWords and run them through SEMRush’s Keyword Research tool. That’ll give you your keyword seed list to start targeting new countries.

So now that you have your list of potential countries and target keywords, you have a big question to ask: Are you going to get a country-specific domain, or figure out an alternative?

Get a domain with a ccTLD

SEO experts suspect that country code domains are an SEO ranking factor, and it makes sense — people in those countries want to see search results that they know will be in their native language. Fortunately, you can buy most ccTLDs from any registration company.

But not all ccTLDs are for sale. Some of them require citizenship in a country or at least a local presence in its borders (like Aruba). Plus, some countries no longer exist (like Czechoslovakia), so their country codes aren’t valid anymore (.cs).

And on top of all that, some countries have multiple ccTLDs, so it’s important to know which domain is the best to use. For example, the United Kingdom has .gb, .uk, and .co.uk, but .gb is rarely used. It’s much more common to see websites with .co.uk as their TLD.

For a complete list of country code domains and their restrictions, you can check out Domain Sherpa’s listing. Then, after you check the list, you can cross off any ccTLDs that you can’t use because of restrictions.

If you don’t want to get a ccTLD, you could use subdirectories to target different languages on your site.

Using a simple /es/, /sp/, or /jp/ after your TLD is descriptive enough to tell visitors that they’re looking at the part of your site that’s in English, Spanish, or Japanese, respectively. It’s possible this doesn’t have the same SEO value as targeting a country via its specific TLD, but it’s still a widely-used option. This strategy also includes using hreflang (as shown below) to make sure that Google categorizes each different extension correctly.

If you don’t use hreflang, you run the risk of attracting people from one country, but sending them to a page in another language. And it’s true that most people speak at least two languages, but it’s still best to write in someone’s native language if you want them to become a customer.

Hreflang is a simple string of code that tells Google what language your page is using.

You implement it using two-character codes to indicate a language and another set of two-character codes to indicate a country. It may seem redundant to have two separate coding structures, but it’s actually important since regional dialects can make a language difficult for other speakers. As a minor example, just consider the dialect differences in English among the USA, UK, and Australia.

So if I wanted to make sure Google knew that WebFX used American English, I’d use this string of code to send visitors to our homepage that’s in English:

If we wanted to forward French speakers from France to a homepage in French, I’d add this string:

And just to complicate things, let’s say I wanted to target English speakers in Australia and French speakers in Canada in addition to the last two criteria. It’d look like this:

You can set this up for as many different extensions as you want, and all of them will help you target different audiences effectively. If you don’t want to manually look up language and country codes, you can use this handy hreflang tag generator tool to make your code for you.

Decide what language to use

This question is easy enough if you want to target the UK, Canada, and Australia — you just stick with English. But if you’re getting some traffic from France or Germany, you have to consider whether you’ll continue to use English or target keywords in the native language of that country. For languages that come from Latin or German, all you have to do is switch to the corresponding language, which could require a translator if you want to do it well.

It’s easy enough since they use the same alphabet. If you don’t want to shell out for a professional translator, you can try your luck with Google Translate. It’s pretty good, but you’ll lose some meaning as you use it.

Just take a look at this one-word translation going into Spanish and then back into English.

Marketing and merchandising are similar, but they don’t have the exact same meaning in English. So if the Spanish equivalent of “marketing” is best translated as “merchandising,” you may not be saying what you want on your site.

If you’re not familiar with the language, that can be a problem. It takes some homework to figure out if the discrepancy is a flaw in the software, based on the context of a sentence, or some other factor. In addition to Latin and Germanic languages, you could also get a lot of traffic from countries like Russia, South Korea, or Japan, which all require a different alphabet (or a set of characters) to communicate.

Is the potential market in these countries worth the time, money, and effort required to make that kind of change? And if it is, can your customer solutions team effectively service that demographic? If the answer to both of those questions is yes, go all out.

But if you answered no, it’s probably best to stick to languages that use the Latin alphabet — at least until you can figure out how to appeal to those other countries.

If you’re planning to start a content marketing campaign to target countries, keep in mind that idioms don’t translate into other cultures. That means phrases like “driving me up the wall,” “a penny for your thoughts,” “at the drop of a hat,” and others won’t make sense.

It’s one of those small considerations that you can easily overlook at first, but it makes a huge difference once you start writing for a demographic that speaks a different language.

With your keywords, domain, and language all decided, all you have to do is start marketing! Have you reached out to an international audience before?

How did you do it? And how successful were you? Let me know in the comments!