What Is Google RankBrain (and How Does It Change Search)?

By Trevin Shirey  ~ 6 minutes to read
Trevin is the VP of Business Development at WebFX. He has worked on over 450 marketing campaigns and has been building websites for over 20 years. His work has been featured by Search Engine Land, USA Today, Fast Company and Inc.

In October 2015, Google confirmed that they developed a state-of-the-art, machine-learning artificial intelligence that they called RankBrain. RankBrain’s task — according to official Google statements — is to help sort through search results as Google’s index of the Internet swells day after day. But for everything Google has said about RankBrain, there are at least two things they haven’t said.

In this blog, I’ll go over what we’ve learned about RankBrain since last October, how RankBrain works, how it has impacted search, and what the future of RankBrain may hold.

What we know about RankBrain

As we stated above, RankBrain is a machine-learning algorithm that allows Google to better understand the intent of search queries. That sounds like a pretty vague cover to let Google get away with whatever it wants in terms of search results.

But according to a study conducted by Stone Temple Consulting, that’s pretty much the only thing RankBrain does. Marketers throughout the world got collectively nervous when we heard that RankBrain is the third-most important ranking factor in SEO (behind links and content quality). That doesn’t necessarily mean RankBrain determines the order of search results — just which search results to include for a query.

That’s because RankBrain is the foremost identifier of semantics in Google Search. But even with all that knowledge, marketers everywhere still have one question.

How does RankBrain work?

As marketers, we constantly want to know how things work.

That’s how we can do our jobs — understanding the ins and outs of the channels with which we work. So naturally, everyone who’s heard of RankBrain has had the same question: How’s it work? But even Google’s top engineers don’t know.

According to a 2016 SMX address by Google’s Paul Haahr, engineers simply don’t get RankBrain. At times, they’re not sure what it’s doing either. So, unfortunately, this is a case that marketers won’t be able to crack for a while.

And considering that RankBrain can constantly update and adapt itself, we’ll always be a step behind. But even though we can’t understand it, we can still test it to see how RankBrain may impact SEO.

How does RankBrain impact SEO?

We completed our own experiment by comparing 76 search results between Google and Bing.

At first, this experiment was meant to compare Google’s Knowledge Graph against Bing’s Snapshot Pane. It was supposed to be a fun comparison — but we started noticing patterns in how both search engines serve search queries. Some of the queries we used were straightforward, and others were more vague and complicated.

One of the most complicated queries we tested was “mouse.” That query could either relate to a fluffy, disease-ridden household pest or the tool you use to interact with your computer. 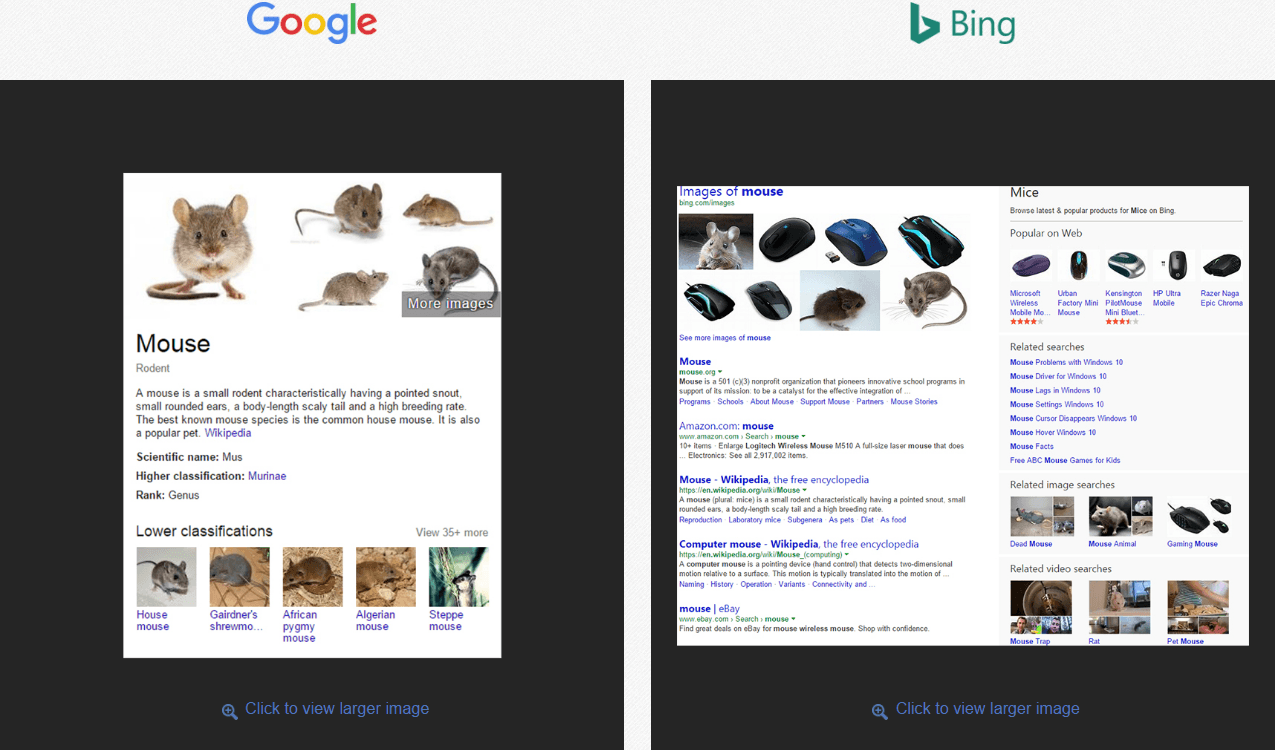 Google’s RankBrain interpretation goes all-in on “mouse” as a rodent, while Bing splits the difference and shows results for computer accessories and vermin. We see this pattern again and again in Google vs. Bing, as well. Google consistently places all its eggs in one basket while Bing is all over the place. So even though Google officials say RankBrain doesn’t directly impact SEO — and it may not have anything to do with ordering search results — RankBrain clearly decides what gets shown in search results in the first place.

That means if you sell computer mice, you won’t get the same screen time as a store that sells live mice as snacks for snakes. Granted, the example we showed above is just the Knowledge Graph, and Google’s algorithm will routinely change since RankBrain learns on its own. But there’s a more important point in all of this.

What’s the future of RankBrain?

RankBrain will certainly have a continued impact in determining the user intent behind specific queries.

But it’s entirely possible that RankBrain won’t stop there. After all, RankBrain isn’t the only AI that Google has. There’s also AlphaGo, developed by the company DeepMind which Google acquired in 2014. DeepMind recently made headlines by making AlphaGo, an algorithm that plays the incredibly complex board game Go.

Go requires two players to place white or black stones on a board to capture each other’s pieces and claim territory. It sounds simple, but there are more possible variations in Go than there are atoms in the universe, which makes Go about a googol (1 with 100 zeroes after it) more complex than chess.

Which is appropriate, considering Google owns it.

AlphaGo is now so advanced that it beat Lee Sedol — the second-best player in the world — in a 4-1 series, making it the first non-human player to do so. That signifies that DeepMind is making some serious advances in machine learning, algorithmic adaptability, digital decision-making, and general complexity. So Google owns the foremost search engine algorithm in the world, and it also owns the foremost strategy engine in the world (for lack of a better term).

And if there’s one thing we know about Google, it’s that they love product synergy. Docs, Drive, Gmail, Contacts, Photos — they’re all interconnected to make an unbeatably high-quality product. So why wouldn’t they combine what may be the two most advanced AIs in the world?

RankBrain is constantly learning and adapting itself to new search queries, and AlphaGo is the crowned computer king of complex choices. Together, who’s to say what this AI duo couldn’t do? Behavior prediction, semantic comprehension, consumer data — maybe even hyper-extensive communications monitoring.

Naturally, this is all speculation. But these AIs are the Batman and Robin of the digital era. There’s nothing stopping Google from creating the single greatest AI the world has ever seen — and using it however they want.

And for the record, if Google does somehow merge RankBrain and AlphaGo, we think they should call it “AlphaBrain.” You’re welcome, Google.

What have you seen from RankBrain?

Have you noticed any changes in search since RankBrain’s introduction? How do you feel about what it’s already done — and its future potential?