How to Promote Your Tweets

Is Twitter a part of your social media marketing strategy? If not, it may be time to think about at least creating an account. As the second most popular social network in the world (behind Facebook), with 310 million unique monthly users, it certainly has potential for helping you reach current and future customers.

But how can you use it to connect with users who’ve never even heard of your company? This is where Twitter Ads come in handy. The platform offers advertising options for a variety of goals, and since there is no minimum budget, it is accessible to almost any business owner.

Keep reading to find out how you can use Twitter as a valuable marketing tool for your company.

If you don’t have a Twitter account for your business, the first step is to create one. Even if you don’t end up promoting any of your tweets, it is a great way to be accessible to your customers and respond to comments and concerns.

After you’ve created an account, take some time to get used to the platform. Follow a few related companies or businesses, compose your first tweets, and use Twitter’s discover feature to see if anyone is already talking about your business. Once you’re comfortable with it, go to Twitter’s start advertising page to begin taking advantage of their paid options.

The first thing you’ll need to do is choose an objective for your ad campaign. If you have any experience with Facebook advertising, Twitter’s options will look pretty familiar. 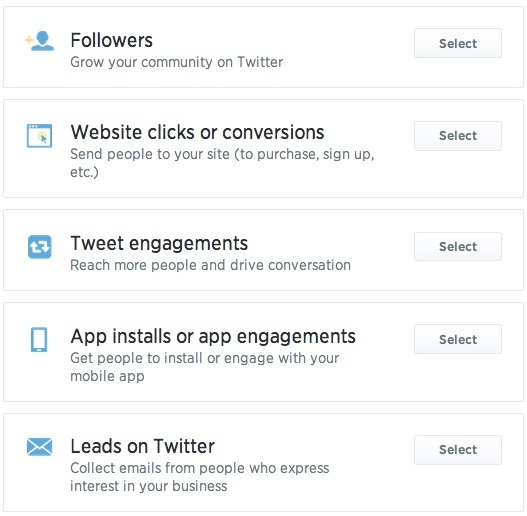 You can choose to advertise with the goal of getting more followers, sending people to your site, getting more users to retweet and reply to you, encouraging users to install your app, or collecting emails from interested users.

These are all valuable options, depending on what exactly your business intends to get out of advertising on Twitter. You can have multiple campaigns running at once if you choose, or you can run one campaign at a time.

Once you’ve determined the goal of your campaign, you’ll need to decide who you want to reach with it.

From there, Twitter allows you to get very specific with who you want to target. You have several options, including keywords, follower targeting, interests, tailored audiences, and behavior.

Keyword targeting allows you to target users who tweet specific words. For example, as a marketing company, we might want to reach users who already tweet about marketing. After you type a keyword, Twitter will tell you the daily volume of tweets that contain that word and recommend additional ones.

In addition to adding single words, you can also enter entire phrases. This is a good idea if you want to reach a very specific, niche audience, or if you have a small budget and want to make sure that you are only reaching the most qualified people. This can be as specific as, say, targeting people within 10 miles of your restaurant that have tweeted that they “want to order takeout.” You can also select to filter out tweets in which keywords are used with negative sentiments.

This is helpful in eliminating users who won’t be interested in your products. For example, someone who tweets about “coffee” is good target for a coffee shop. But if they tweet that they “hate coffee,” it’s probably not a good idea to advertise to them, even though their tweet includes your keyword.

Follower targeting allows you to target users who have interests similar to followers of certain accounts. This can be useful if you know who your competitors are (and their Twitter handles) and think that their fans would also be interested in your company.

If you’re not sure who to include here, Twitter can help you identify accounts that have similar followers to the users you want to reach.

In addition to targeting specific keywords, you can also target entire interests. These interests are determined by the accounts users follow, as well as the tweets they engage with. 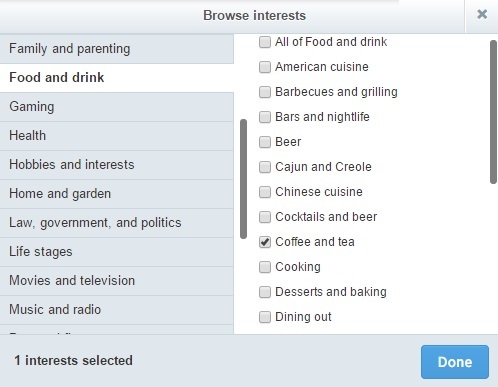 This means that you can reach users who are interested in specific topics, even if they don’t actually tweet about them.

If you know the exact users you want to connect with, you can target them by Twitter handle. This requires a minimum of 500 users, and you can upload lists from your computer. You can also use this feature to exclude certain users.

Behavior targeting allows to reach users based on online and offline actions and characteristics, like buying a house, donating to a cause, or following a specific diet. You can also exclude certain behaviors. For example, you probably don’t need to advertise your steakhouse to vegetarian tweeters.

Twitter ads are an auction-based system, so you have to specify the maximum amount you are willing to pay for each action acquired through your campaign. This way, you will only be charged when users take the specific action your campaign is designed to deliver. For example, if you are running a followers campaign, you will only be charged for the follows you acquire – not the impressions, replies, or retweets your tweets receive. 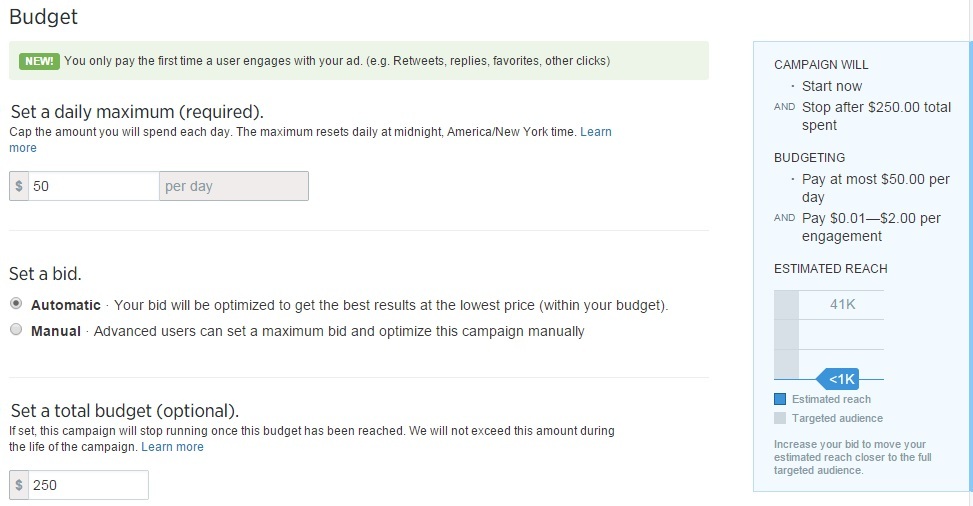 If you aren’t sure how much to bid, Twitter shows what other advertisers are bidding for similar campaigns. They also have an automatic bidding option, which will optimize your campaign to get the best results at the lowest price within your budget. In addition to setting your bid per action, you’ll also have to set a daily maximum budget.

Once you reach your set budget, Twitter will stop showing your promoted tweets to users. You can also set a total budget, meaning that your campaign will run until you’ve spent that amount.

Once you’ve determined you objective, audience, and budget, it’s time to actually create your tweets.

You can do this by composing new tweets with text, links, and images, or by selecting existing tweets from your account. 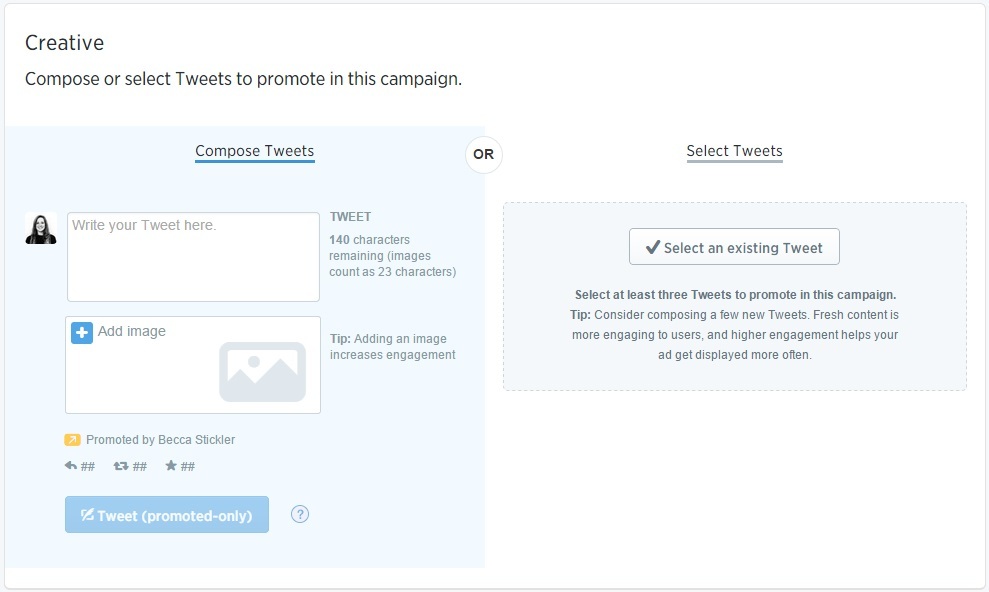 You can also select scheduled tweets, even if they haven’t been tweeted yet. This feature allows you to set up campaigns in advance for announcements or specials without giving them away ahead of time.

In addition to ad campaigns, Twitter announced a new quick promote option in February. This allows you to promote your best-performing tweets directly from your dashboard, without having to go through the entire setup process. All you have to do is set a budget, and Twitter will automatically target the tweet to users who have interests similar to your followers. 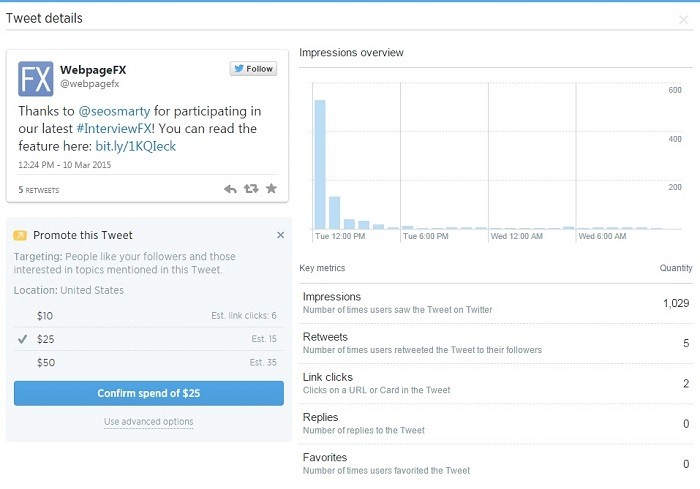 This feature is aimed at small and medium-sized businesses, and is designed to help companies quickly and easily reach more users without having to invest much time and effort into advanced options.

If you don’t have room in your budget for Twitter advertising right away, simply creating an account is probably enough to get you started on the platform. But if you’re looking to expand your social media strategy, Twitter’s advanced targeting options can be a great way to reach a tailored audience.

Their quick promote feature is also a nice choice for businesses who don’t have dedicated marketing teams, but still want to create a presence on the second-largest social network. This post on Twitter advertising is the second in a series about paid advertising options on social media. Read our post on Facebook here, and stay tuned to learn how to promote your posts on Pinterest and LinkedIn!