Apple computers are known for their simplicity in design and excellence in performance. These are the two basic reasons that entice web designers and developers to use Macs as their work computer. There are oodles of third-party applications out there for web designers and web developers who use Macs.

In this article, we share with you the top ten web design apps for Mac that web designers/developers will find useful. Though not all of them are exclusively for Macs, they are all built with Mac users in mind (and not haphazardly ported over for compatibility).

Seashore is an open-source image editor that utilizes the Mac OS X’s Cocoa Framework. It’s a full-fledged image editor that gives Photoshop a run for its money. Seashore provides a ton of features for its end-user including various textures, gradients, and anti-aliasing for its text and brush tools.

Along with those great options, it also supports editing over multiple layers and alpha channels. It’s an awesome image editor for Mac users on a budget. 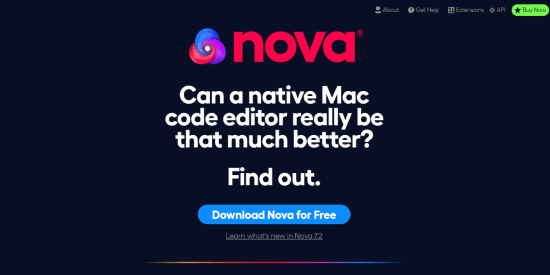 Nova can be the sole reason for switching to a Mac as a web designer; it is an extremely well-done and intuitive application that makes the web development workflow a breeze. It was designed to compartmentalize website-building processes and for team collaboration. Nova isn’t free, but at less than a hundred dollars, you get a lot of bang for the buck.

TextMate is an comprehensive text editor application designed exclusively for the Mac computer; it is the premier example of how text editors should function. A premium application, a MUST have for all web designers.

Paparazzi! is a basic tool for the Mac OS X which enables the user to take screenshots of entire web pages without any external editing. This tool relies on the Cocoa API and WebKit framework, written in C. A great tool for designers who need to capture entire web pages for design mockup presentations or as web graphics on a site they’re making.

Nvu is a high-performance WYSIWYG (What You See Is What You Get) editor built around Gecko (the rendering engine for Mozilla-based browsers). This application runs on Mac OS X 10.2.8 or later which makes web designing a cinch even to beginning-level web builders.

Think is an excellent application for making you focus on the task at hand. This application creates an ‘Illumination Panel’ that replaces the Mac OS dock by creating a list of applications that you use to select the application you want to ‘Focus’ on.  This is an essential application for those that are easily distracted by other things such as Instant Messaging, Twitter, and emails.

Aquamacs Emacs is an extended version of the original and robust Emacs text editor with an addition of the new Aqua look-and-feel making the application blend right into the Mac OS X user interface. This editor is perfect for people who work with HTML, LaTeX, C/C++, Java, Python, Perl, Ruby, PHP and much more.

Xee is a straightforward application for browsing your images. This app can be considered as a replacement for Preview or any other default image viewer pre-installed on the Mac OS X. It’s sleek, fast, and uses very little system resources.

Loads of shortcuts and a nice streamlined user interface add to its list of features.

Scribus is an open source application for creating high quality page layouts for Mac and Linux users. Scribus has an intensive feature set under its clean and impressive GUI. Some of its publishing features include: CMYK Color, Separations, ICC Color management, and flexible PDF Authoring and Editing.

Smultron is a gratis text editor which can be considered as a replacement for the default text editor that comes along with the Mac. Smultron is quite versatile and easy to use. It is meant to be used on the Mac OS X Leopard 10.5.

The editor can be used as a basic text to a complete HTML & Script editor.

What are your favorite web design applications?

Do you have a favorite Mac application that you can’t live without? Do you have experience with the above list of applications? Please share your thoughts in the comments – we’d love to hear them!