A Look at Some CSS Methodologies

By William Craig  ~ 16 minutes to read
President of WebFX. Bill has over 25 years of experience in the Internet marketing industry specializing in SEO, UX, information architecture, marketing automation and more. William's background in scientific computing and education from Shippensburg and MIT provided the foundation for MarketingCloudFX and other key research and development projects at WebFX.

CSS is notoriously difficult to manage in large, complex, rapidly-iterated systems. One reason is CSS lacks a built-in scoping mechanism. Everything in CSS is global.

That means any change you make has the potential to cascade and alter the presentation of unrelated bits of the UI. Extended CSS languages, a.k.a. CSS preprocessors, such as Sass, Less and Stylus make things a little easier by offering up features that make writing CSS easier.

But even these extended CSS languages, in my opinion, don’t truly fix the scalability issue. Until CSS gets its own native scoping mechanism, we need to devise our own system for locking down styles to specific sections of an HTML document. CSS methodologies are the solution.

In this article, we will take a look at these CSS methodologies:

Full disclosure: I’m the creator of Systematic CSS. CSS methodologies are formal, documented systems for authoring CSS in a way that allows us to develop, maintain and scale the front-end as a set of small, isolated modules. Rather than as one massive lump of indivisible code.

Adopting a CSS methodology — even if it’s one that you create yourself — will make it easier for you to design and iterate on your web design projects, regardless of scale and complexity. Related: CSS Development at Large-Scale Websites Each CSS methodology offers a slightly different set of solutions to the CSS scalability/maintainability problem. A CSS methodology will often define guidelines for:

There is no “best” CSS methodology. Different approaches work better for different individuals/teams/projects. Hopefully, looking at a few existing CSS methodologies will help you discover one that fits your needs.

Or it might inspire you to create your own custom CSS-authoring guidelines.

Nicole Sullivan’s Object-Oriented CSS, or OOCSS for short, was launched in 2009. It was really the first CSS methodology to become widely adopted. It’s still hugely influential today. OOCSS advocates the separation of structure from skin.

The methodology makes a clear distinction between content and its containers. In OOCSS, style rules are written exclusively using CSS class selectors.

For example, the style of your button elements might be set via two classes that you have given the class of:

One goal of the OOCSS methodology is to reduce duplication of the same properties throughout your various style rules. In other words, OOCSS can help us maintain DRY stylesheets. The methodology attempts to achieve this goal by using lots of small, modular, specialist CSS classes.

The use of descendant selectors is discouraged. For example: CSS

This way, the presentation of your HTML elements is never dependent upon them being used in a specific context or DOM structure.

The great thing about the OOCSS methodology is it urges authors to make the most of CSS’s cascading behavior, rather than trying to lock it up with high-specificity selectors. Related: How CSS Specificity Works Authors are encouraged, whenever possible, to reuse existing style rules instead of creating new ones. We are also encouraged to extend style rules by specifying additional CSS properties with new classes, rather than modifying or overwriting existing CSS properties.

Let us say we want to give the first list item of an unordered list element a different color. This is one way to do it: HTML

To make our CSS more modular and flexible, and to avoid descendant selectors, the above counter-example could be rewritten in this manner: HTML

The main downside of OOCSS is that you can end up with an awful lot of classes. Which can be difficult to maintain and manage. And, in my opinion, the concept of object-oriented programming — which is where OOCSS takes inspiration from — does not fit comfortably with CSS.

But that’s not to say the principles of OOCSS are invalid. On the contrary, OOCSS is a commonsense CSS methodology that brings back sanity to large-scale CSS development. 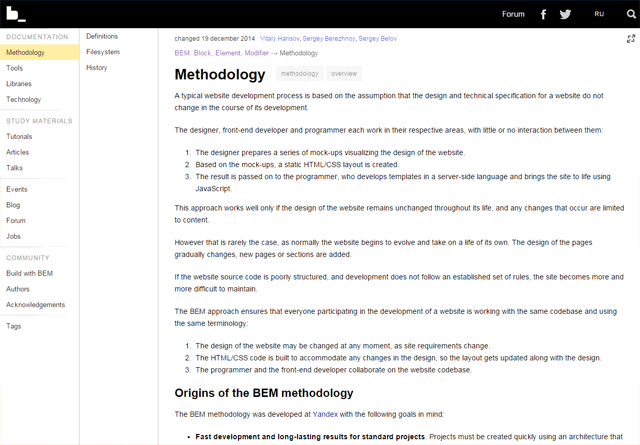 Block, Element, Modifier — more commonly called BEM — is a CSS class-naming system devised by the dev team at Yandex (the Google of Russia). The idea behind BEM is to differentiate CSS classes that fulfill different roles. This is done by naming CSS classes in a way that indicates their role.

BEM complements OOCSS because OOCSS doesn’t impose any particular class-naming convention. In BEM terminology, a block is an independent, modular UI component. A block may be composed of multiple HTML elements, or even multiple blocks.

An example of a block might be your navigation menu or search form. An element is a component of a block. An element serves a singular purpose.

For example, if you have a navigation menu block, then elements of it might be your navigation menu’s links, which in turn might be in the form of list items (li elements) and links (a elements). A modifier is a CSS class that changes the default presentation of a block or element. This is the BEM class-naming syntax:

Consider the following example, the markup for a login form: HTML

Here’s the markup above with BEM classes applied: HTML

The three modifiers are:

So instead of the following style rule, which uses three CSS class selectors… CSS

…you can just use a single class selector: CSS

BEM is a very robust class-naming convention. It successfully distinguishes the different concerns that classes are used for.

And it’s easy to see in the markup which classes are related to one another. A couple of subjective criticisms against BEM are:

Personally, I don’t think those are particularly strong criticisms. However, it would be nice to have a class-naming convention that is as robust as BEM, while also being a little tidier and more intuitive. 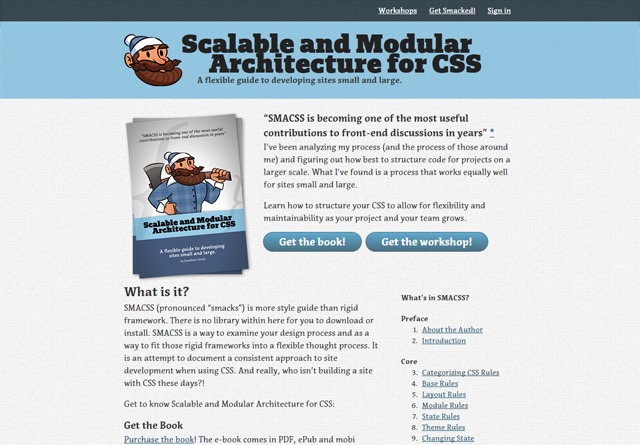 Jonathan Snook published his book on Scalable and Modular Architecture for CSS in 2011. Abbreviated as SMACSS. Pronounced as “smacks”. A key idea in this CSS methodology is how we categorize our CSS style rules.

Snook came up with five categories:

There are no names for base styles because only type selectors (h1, p, a, etc.) are used for those. Modules are given their own unique class names. Sub-components and variations are prefixed with the name of their parent module.

Let’s say our layout is called .l-footer. We have a search form module inside it. The search form has already been submitted at least once by the user.

SMACSS discourages the use of descendant selectors. Jonathan Snook explains this by introducing a concept he calls depth of applicability. This concept is all about limiting the impact that CSS has on HTML markup by using classes to very precisely target elements you want to style. 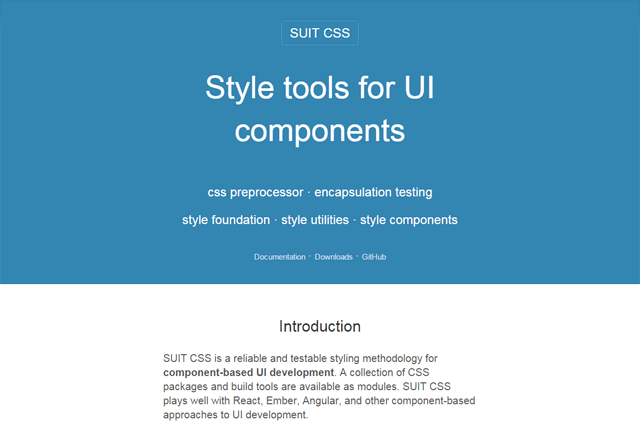 Nicolas Gallagher’s SUIT CSS introduced in 2014, is interesting because it combines a BEM-like class-naming system with a CSS preprocessor. So SUIT CSS provides us with extended CSS syntax a la Sass, Less or Stylus. SUIT CSS classes come in five formats:

This class-naming convention highlights the division between:

Here’s how this CSS methodology might get applied to a login form: HTML 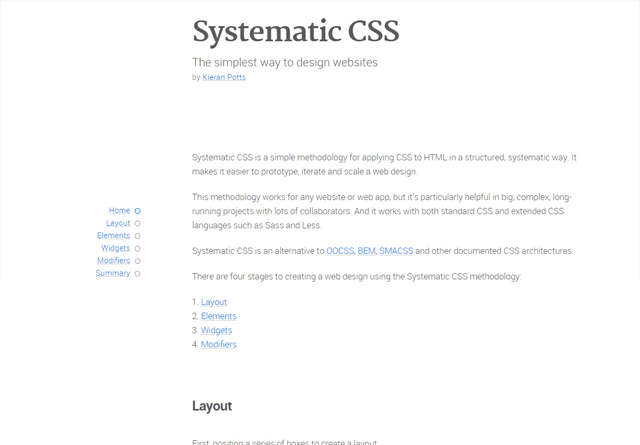 HTML First, an empty wireframe-like layout is created from a series of sectioning elements such as section and div:

Second, we establish the default presentation for HTML elements that will encapsulate content and render interactive controls. Examples include headings (h1, h2, h3), paragraphs (p), lists (ul and ol), tables, forms, and so forth. Third, we identify recurring patterns of content in our designs.

We bundle these recurring patterns up into independent modules of markup and styling (and scripting if needed). These bundles of recurring content patterns are called widgets in the Systematic CSS methodology.

Here’s the markup for two widgets that render a navigation bar and search form: HTML

Content — in the form of widgets and naked HTML elements — is then placed within the layout. Finally, modifier classes are added to vary the default presentation of things.

In the following example the navbar-primary modifier varies the default presentation of the NavBar widget, and the navbar-selected modifier targets the current selection: HTML

In Systematic CSS, each class either:

Classes must fall within one of the three distinct purposes above. A class must not combine/fuse together the purposes above. The three types of classes adopt different naming conventions, to easily tell them apart.

What’s nice about this naming convention is the hierarchy of classes is represented by their letter-casing.

Layout classes, written using all-upper-case letters, scream out from the markup. Examples: .NAVIGATION, .SIDEBAR, .FOOTER. The CamelCase letter-casing of widgets, which will always be nested within layout classes, are a little less prominent.

Examples: .MainMenu, .ImageGrid, .BlogPost. Modifier classes — which are arguably the least important classes since they merely modify things and are not critical to achieving a default presentation — are the least conspicuous of all, being written in all-lower-case letters. Examples: .is-highlighted, .has-errors, .hidden.

They make it easier to develop and iterate a design. They make front-end code easier to read and understand, provide ready-made documentation, and make it easier for multiple people to collaborate on a design. Adopting a CSS methodology can reduce the learning curve for new designers joining a project, and make for a smoother transition when a project is handed over to a new team.

And because CSS methodologies encourage reuse of existing code, they enforce consistency in visual designs and reduce page size and increase page rendering speed. CSS methodologies have different class-naming conventions and they carve up web designs along slightly different lines. But the specifics of any particular methodology are less important than the general solutions they provide for modularizing front-end code and making CSS easier to scale.

You can take away the ideas and develop your own categories of classes and devise your own class-naming conventions that work best for you. That’s what I do. Systematic CSS is my starting point, but every project is different, and I always tweak and extend my CSS methodology to better fit the skill set and creative temperament of the team I’m working with.