How to Navigate Design by Committee 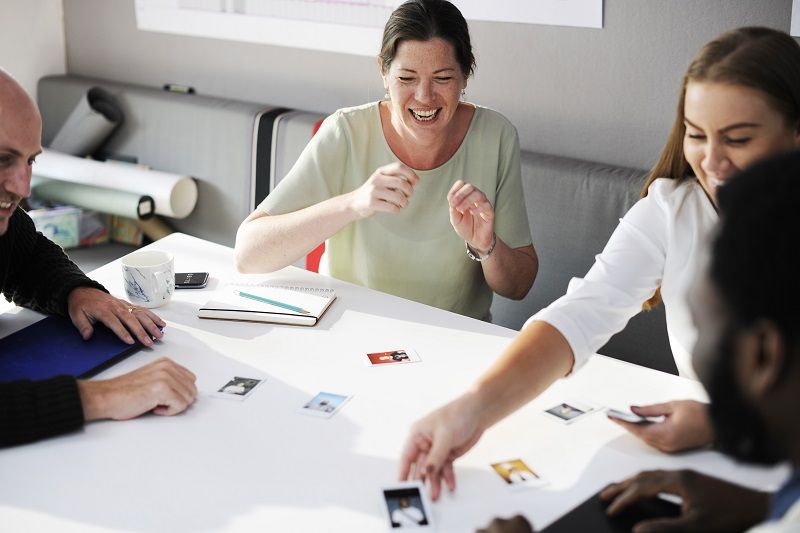 The phrase “design by committee” evokes a range of emotions from designers, mostly the kind you save for an arch-nemesis (think Lex Luthor) or expend on your Windows-based PC. A quick search will uncover a variety of articles and jokes bemoaning the process, and with good reason; it has long been the Achilles’ heel of many a designer’s creative freedom. However, as enjoyable as it can be to slam the design feedback process, there are steps you can take to make the most out of it — because let’s face it — you usually don’t have a choice to design on your own (and if you do, consider yourself lucky).

In fact, there may even be situations when design by committee (when managed effectively) produces better results than a single design dictator could produce on their own. Like the old proverb says, “two heads are better than one,” which can result in additional experience (knowledge of what has worked and what hasn’t in the past), combined creativity, unique viewpoints and efficient error checking. Before we continue, let’s examine why design by committee exists and why it so often fails.

History of Design by Committee

Design by committee occurs anytime more than one person is actively involved in a design project. For most designers, this is standard operating procedure. At times, a committee might consist of a boss or client weighing in on the design, but more often than not, it can encompass your co-workers, managers, clients and even outside opinions (think spouses, children and pets).

Oftentimes a committee is established to make everyone feel involved in the process, or to provide a “safe and often anonymous process for finger-pointing down the line,” says writer and graphics artist, Speider Schneider. Design by committee is nothing new. On July 4, 1776, a design committee was established to design a seal for the new American nation. Members of the original committee included well known historical figures like Benjamin Franklin, Thomas Jefferson and John Adams.

After numerous variations, three separate committees and six years of revisions, a final design from Charles Thomson was approved.

Since that event, which certainly was not the first, thousands of other designers like Thomson have dealt with design committees. And while we may be able to consider his final product a success, the process itself (6 years in the making) most likely was not.

Hopefully, the thought of participating in a multi-year, government-run design committee makes your situation seem a little more manageable.

There is never one clear reason why design by committee fails. Usually it is a combination of factors that plague the project from the start.

If you haven’t read Matthew Inman’s How a Web Design Goes Straight to Hell, it is the one of the most entertaining portrayals of design-by-committee-gone-wrong to date, along with Stop Sign Designed by Committee. Gary Hartley at The Floating Frog describes a typical design by committee outcome:

Sound familiar? Most committees end up in this kind of circular, unproductive feedback loop because the group operates on many or all of these principles:

Despite the obvious pitfalls of design by committee, there are effective strategies for navigating the process that can produce positive outcomes.

When done right, the product of a well-run design committee will satisfy all parties involved and produce a better design than if just one person were in control.

How to Successfully Navigate Design Committees

There are several approaches you can take next time you find yourself in a design by committee situation. One option is to never give in, ignoring the suggestions of others and stubbornly standing by your creative decisions.

This tactic — if it doesn’t get you fired — will certainly label you as “defensive” and “insubordinate.” On the other end of the spectrum is the doormat approach, yielding to everything and trying to be a crowd-pleaser. This approach may be more favorable for your immediate career prospects, but eventually it will catch up with you, resulting in subpar, generic work. Fortunately, there is a third way, an approach that will keep your client happy and allow you to maintain your creative integrity.

Outlined below are the principles of this approach.

A successful design starts with a well-defined objective that everyone understands and supports. Without one, it’s nearly impossible to complete a design project on your own, let alone as part of a large group. Be sure you also define and agree upon the target market, business objectives and criteria for success.

Once you begin the feedback process, having a clear set of goals will help keep feedback on track and make it easier to disregard suggestions that are not in line with the objective.

2. Use the Right Tools

Meeting face to face to discuss a design proposal is often the most effective route, but when a meeting is not an option, it’s important to use the correct tools to facilitate an organized and productive discussion. For example, collaborating via email often leaves a confusing string of comments and attachments which are difficult to manage and will lead to frustration. Services like Private Feedback offer a secure environment where teams can exchange feedback in an organized and visual format (for more options, here are other feedback/critiquing tools). 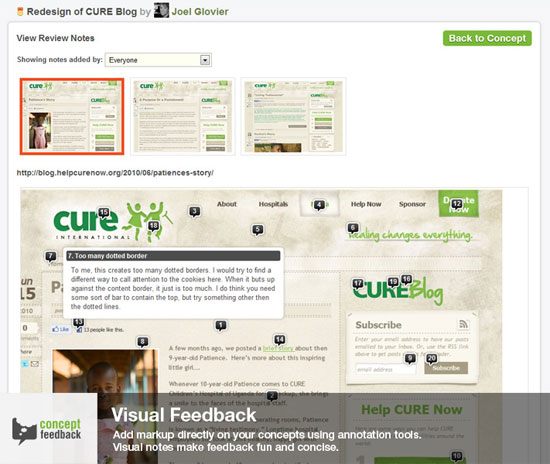 Instead of asking “What do you think?” which often elicits a long-winded emotional response, try to ask questions that require the participant to consider objective factors, like business goals or the end-user experience (i.e. “Does the design meet our stated business goals?”). Make sure to challenge personal opinions by asking questions that dig deeper and expose the core of the issue.

Simply asking “Why?” can start the process of determining whether or not the opinion is valid and relevant to the objectives.

Make sure there is a purpose behind each element included in your design, and be prepared to articulate each of them. Having a well-reasoned response based on design principles and real world experience will be much better received than a defensive, emotional reaction. You should also know when to pick your battles.

Some aspects of a design just aren’t worth arguing over.

A design committee is made up of a variety of personalities. Some people are there to see the project succeed and provide educated feedback, while others are just there to argue or add their fingerprint to the process. Determining who is who from the outset can help you effectively manage the feedback process and focus on the suggestions and discussions that will contribute to the success of the project.

If at all possible, try to limit the size of the group and only include key players to avoid added confusion.

Internal discussions can only take you so far in the design process. At some point, your committee will run in to disagreements. Testing with real world users can often help resolve these disputes and determine a solution that not only works on the drawing board, but in a production environment.

Here are several tools to consider which can be used throughout the design process:

Design by committee is a fact of life for many designers. Despite the many negative connotations, when approached with the proper tools and strategies, design committees can be a satisfying experience for everyone involved, producing quality projects and happy customers. However, the responsibility is on you, the designer, to create an environment that produces results.

Have you had a design by committee experience of your own, whether good or bad? Let us know how you handled it in the comments below.

Read about some projects designed by committee.