5 Prototyping Tips That Will Improve Your Process

Stop me if you’ve heard this one: In the middle of a design presentation, a puzzled audience member raises their hand and asks, Why is all the copy in a foreign language? It’s not a joke — but I can’t help but laugh at the countless times I’ve used lorem ipsum in a prototype, only to have it confuse someone on our team. Visual thinkers, such as designers, can easily visualize an image placeholder box as a striking photograph.

In our minds, we can convert a grayscale wireframe into a beautiful website layout that has a well-crafted visual hierarchy. But for others, placeholders, low-fidelity wireframes, and temporary styling can present a real challenge. If a person can’t picture the final product, how can they be comfortable during the design process?

So before we talk about specific prototyping strategies, let’s first go over the topic of design fidelity in order to set the stage for our later discussion.

In order to make the prototyping process go as smoothly as possible, the first thing that needs to be addressed is the level of fidelity that will be used throughout the process. To learn more about this topic, read this prototype fidelity guide. The trick is knowing when to use a high-fidelity prototype presentation.

Introduce it too soon, and the flow or experience might seem unrefined. Present it too late in the process, and your client might get hung up on finer design details, like why the logos aren’t in place yet. The secret to better high-fidelity prototyping?

Even better low-fidelity planning. Nailing down the general flow with sketches and wireframes is what lets you move faster during the later, high-fidelity rounds. 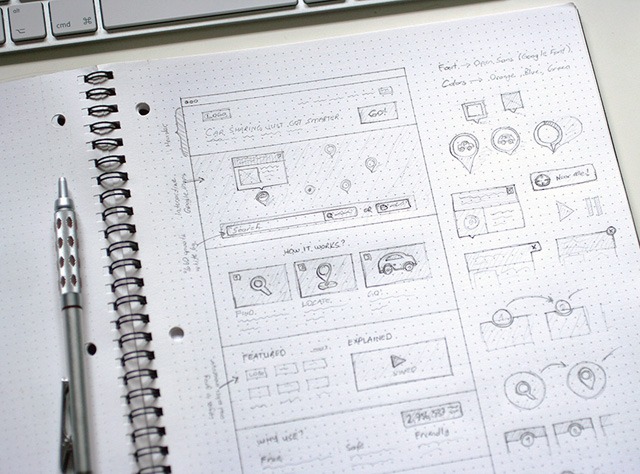 That’s why when you share prototypes with a large, diverse team it’s important to set expectations about how closely the prototype reflects the final product.

You have to inform the audience about prototype’s level of fidelity, and also what they should be focusing on when evaluating the prototype.

Who Should See Your Prototypes?

Share your wireframes early and often. But consider who you include in the process.

Constant collaboration during the design process is the key to launching a great product. It can be tricky to navigate exactly who sees a design mockup at what time, but presenting things when you’re comfortable with them is a big part of convincing others on your progress. If you think a team member might struggle to grasp the low-fidelity versions, consider asking them to hold their feedback until you’ve reached a higher fidelity stage.

Collecting opinions at various stages of the process is a lot simpler now because of modern tools like Slack, Trello, and of course my company’s app, InVision.

Here are a few tips and strategies for making the prototyping process go smoothly. 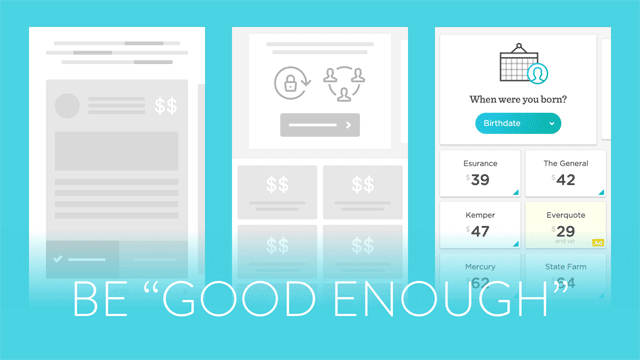 A great high-fidelity prototype doesn’t have to be pixel-perfect and production-ready. It just has to be good enough to remove distractions from the process. A wise man once said, “Investment is the enemy of creativity.” Getting from prototype to production is going to take enough work to begin with, and putting excessive effort into your mockups will steal time away from other important tasks.

A solid way to determine when a prototype is “good enough”: Predict what questions you’ll be asked when you present the prototype. Start by identifying the questions you can squash with a simple visual solution and don’t stop until you’re out of questions. Get things looking good enough and move forward. 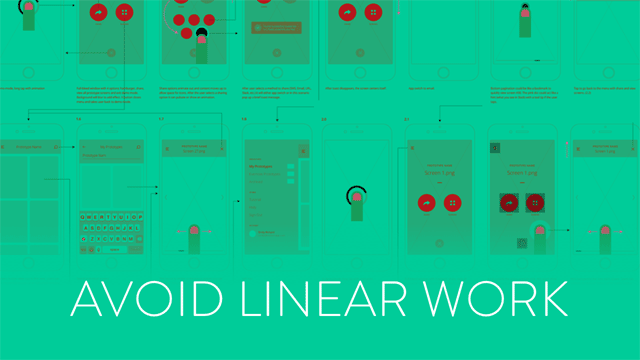 Like a computer, your design process needs to be multi-threaded. Work on creating a design system, not a single screen. This way, a hiccup in any single area won’t leave you blocked.

Always have a plan B (and C) ready. Dead-ends are not an option. Just changing your focus to another task can lead to a breakthrough in the original area.

Take a break on a tough problem to rack up a design win elsewhere. 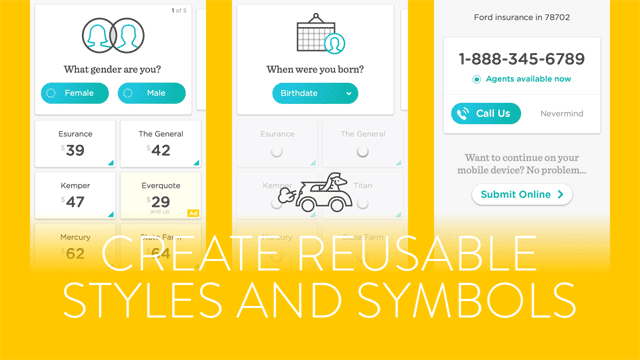 The quickest way to change the background color on those 20 cards in your design: Do it all at once. The major design tools boast reusable styles and symbols that can save you tons of time making edits and let you quickly try wild stuff to see what sticks. For example, in Sketch, creating a Symbol is as simple as selecting a group of elements and choosing Convert to Symbol.

Keep things organized by creating a folder system and naming things with a slash, like “Mobile / Header.” Then, when you need to insert the symbol in a design, you’ll have a nested menu such as: Insert > Symbol > Mobile > Header. Check out more prototyping tips for Sketch.

Using Smart Objects in Photoshop or the Symbols and Shared Styles in Sketch is equivalent to developers using boilerplate code and JavaScript frameworks for stuff they have to code all the time.

Things you need again and again — buttons, content sliders, media objects, etc. — can be modularized and reused. You wouldn’t want to code the same CSS style rules 14 times, so why do the same with Photoshop layers?

Repetitive work is the scourge of a productive team. Those 15-minute design tweaks become a lot more time-consuming the fourth time you do them. Organized styles and symbols help keep the nooks and crannies of your design document in sync, cutting down on costly surprises. 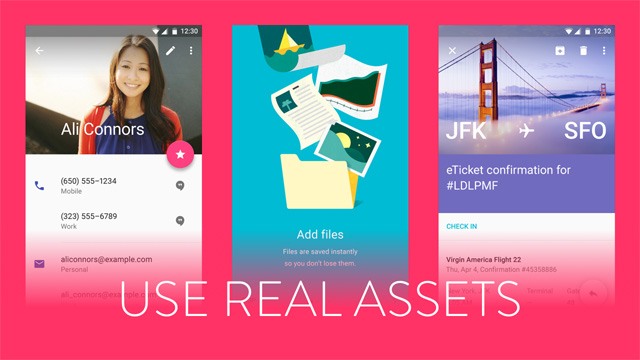 The right photo or illustration can take a wireframe to a high-fidelity design in seconds. Look at the examples above from Google’s material design spec. Minus the single art asset, each screen is little more than a wireframe.

Adding some engaging imagery made all the difference. Also, using realistic assets can help avoid confusion when presenting your prototypes. But you don’t need custom photography or finished illustrations just to present.

Stock or existing assets can help you quickly fill out lo-fi layouts. If you need help sourcing things, work with your content team — they’ve likely got a deep archive of on-brand images. 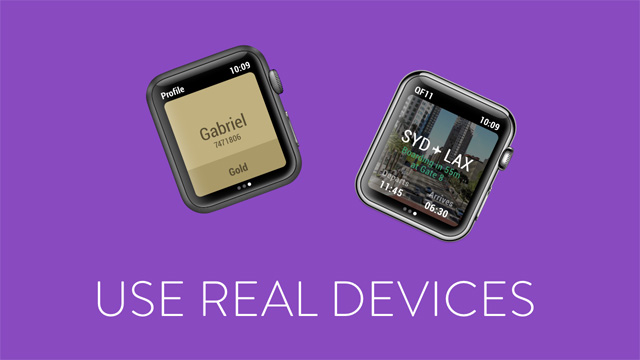 The launch of the Apple Watch brought a flood of new apps just for wrist wearables. One airline company even deployed mobile boarding passes, only to discover that most people’s arms don’t fit into the QR scanner at most airports. The lesson?

While an emulator on your desktop might make something look native, nothing can replace actually experiencing designs on a real device, in a real environment. Prototypes should be tested in real devices as much as possible before considerable amounts of time and resources are spent developing it into the final product.

Create a solid foundation with your wireframes and you’ll iterate much more quickly in high-fidelity phases. Separating the structure and functionality from the look and feel keeps you focused on what’s important: making a killer product.

Clark Wimberly is a Content Designer at InVision, makers of a popular design prototyping tool. He spends his days writing and creating design content (screencasts, UI kits and ebooks). Previously, he was a UX Designer and founded the online community Android and Me.