Facebook is hands-down the most popular social media platform today. With over 1.4 billion monthly active users, 23 billion backlinks, and one of the most recognizable domains in the world, it’s hard to imagine a day when Facebook is no longer relevant. Facebook has become so ubiquitous that, in 2014, the average American spent 40 minutes on Facebook each day.

That’s a lot of people spending a lot of time on one website — and a lot of potential customers for social media marketing. That’s why so many businesses choose to invest their precious marketing time and money into Facebook. The down side is that it’s easy to get caught up in all of Facebook’s feeds and features, so it can quickly become a time waster.

And if you’re not familiar with Facebook at all, it can take a while to learn how to navigate everything. If you’re going to be efficient, you need to navigate your dashboard quickly, which is why Facebook created keyboard shortcuts for the basic commands. On top of their general keyboard commands, Facebook makes it easy to manage your account’s messages with a couple keystrokes, effectively turning it into one of the most user-friendly messaging platforms online.

There’s even a shortcut to see all of the messenger keyboard shortcuts. How meta is that? Facebook also utilizes keyboard input combinations for emoticons.

Emoticons — also called emojis — trace a long lineage, back to the likes of AOL Instant Messenger and other staples of the early Internet. And, in many ways, Facebook has kept their antiquated charm with a couple of fun twists on old ideas. With this Facebook keyboard shortcut cheat sheet, you can efficiently use your time on Facebook, manage your company’s messages, and add a little extra flare when you talk to your customers.

Facebook’s general keyboard shortcuts are designed to help you jump around your dashboard and information pages. It saves some time if you’re a frequent clicker, and you can quickly digest all of your relevant updates in no time. Plus, if you’re new to Facebook profile management, it’s way easier to hit a couple keys than hunt for an icon. 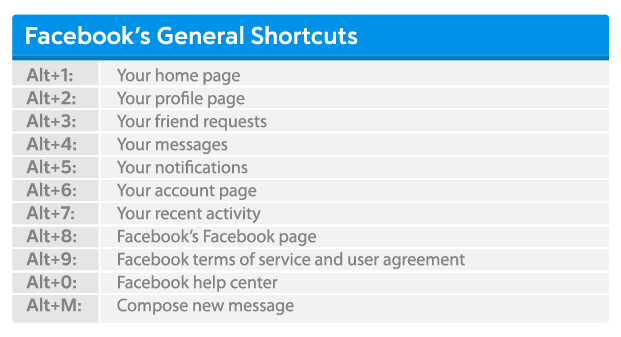 A lot of these shortcuts are self-explanatory, and you’ve probably seen most of the screens that they lead to before. In fact, everything from Alt+1 to Alt+7 is pretty standard social media stuff — checking your notifications, pages, requests, etc. And you’ve probably composed a new message before, though you might not have used Alt+M to do it.

But after these, the keyboard commands get more interesting. Alt+8 is almost funny in its simplicity. Of course Facebook has a Facebook page.

If they didn’t, it’d be like Twitter not having a Twitter account. But it’s not something everyone might think to check right off the bat — or even after a couple years. Alt+9 directs you to Facebook’s terms and policies, which includes information on a ton of topics, probably more than most users would ever want to read.

Their data policies, transaction terms, and nearly everything else you could want is on this page, with the exception of a link that says “Privacy.” Other than that, most of Facebook’s methods and procedures that you need to know are right there. The Facebook Help Center is relatively new, compared to these other functions. Alt+0 takes you to a catch-all FAQ page that covers just about everything, including profile apps, uninstallation instructions, and even suicide prevention.

The page holds dozens of sections, all of which delve into specific issues in detail.

In addition to general, site-wide shortcuts, Facebook also has a few shortcuts that are only usable in your message dashboard. If you send, read, and manage a lot of customer messages, these shortcuts can help save you valuable marketing time.

All of these shortcuts serve pretty basic functions. The ones that might stick out the most are Alt+Y and Alt+Z, or archive and unarchive conversation, respectively. Facebook’s archive acts like a light switch — you turn off the conversations you don’t want to see at the moment.

While it doesn’t delete the conversation (your message history is still there), it throws the message into a separate folder. On the other hand, the “unarchive” command places the message front and center so you can bring a message back to your attention whenever you want. It’s pretty handy if you like organizing your inboxes — and it can be a godsend for Inbox Zero fanatics.

Unlike most other social platforms that rely on the emojis built in to users’ smartphones, Facebook has its own set of extensive emoticons, which are all accessible with quick keyboard shortcuts. There are more standard options in Facebook than most other social networks, and they’re also much more nuanced, expressive, and — in some cases — gross.

Facebook has basic emoticons like smiling and frowning faces, and it also packs a number of unique expressions.

The Pacman face, personal headshot, and seemingly-random numbers are some Facebook-only additions that mesh well with the emoticons and emojis many have come to know and love. The most memorable of the bunch are toward the bottom of the list. It makes sense Facebook would add an emoticon for their signature thumbs up.

It’s their old-school “Like” icon, and it’s a great piece of nostalgia for Facebook adopters of yesteryear. Plus, who doesn’t like a thumbs up? Arguably the most interesting Facebook emoji is the headshot of Chris Putnam.

Putnam created a worm that targeted Facebook in 2006 and changed thousands of active profiles to resemble MySpace, the social network that Facebook fully dethroned around 2008. And even though he attacked the company with a virus, Facebook apparently liked Putnam’s panache, because they hired him. The penguin, shark, and robot emoticons aren’t likely to be used in casual conversation, but their presence is refreshing in a niche that’s dominated by yellow-tinted smiles and frowns. You also have to hand it to Facebook — the command for the penguin actually looks like a penguin.

Facebook apparently enjoys literary references as well, as :42: creates the image of a 42 in a red box. In the popular book-turned-movie A Hitchhiker’s Guide to the Galaxy by Douglas Adams, a supercomputer calculates the meaning of life over 7.5 million years and arrives at the conclusion of “42.” Like those of us in real life, none of the characters in the book knows what it means. The poop one is just poop.

This cheat sheet of Facebook keyboard shortcuts is intended to make it easier for you to navigate and work on Facebook — not to mention add a little flare to your direct communications with customers. You can also download this cheat sheet for your own reference. Test out some of these shortcuts, and let me know in the comments if any helped you out!

Make sure to stop by every once in a while as we make updates to our Facebook cheat sheet.