By WebFX Team  ~ 8 minutes to read 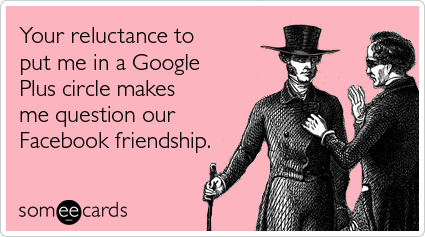 The biggest Social Media news of the past week is Google+. The “Facebook Killer,” “Buzz Part II” and “Google’s Global Takeover Part XXII” is getting a lot of press, and for good reason: it is a social network that aims to contend with Facebook. It intends to do so with some initial features including group video chat capabilities, group texting (Huddles) and enhanced privacy options (via Circles).

After finally receiving an invite and elaborating on my Google profile (I’ve been a Gmail user for quite a while), there was nothing to do but wait for my friends to get my invites and join.

I now have about 10 connections on Google+. So, my Circles are pretty thin. Decidedly, the only way I’ll use Google+ as my go-to social network is if everyone, or at least a majority, makes the transition—and soon.

This is as important to me personally as it is to businesses and brands, as they want to be present where their customers are.

The dilemma this “friend overlap” causes right now is deciding which social network to post to (as if there weren’t enough choices already). Can’t my 10 Google+ friends just read what I post to Facebook, along with the rest of my hundreds of Facebook friends? Why double post?

The positive: I can start over with adding people to Google+.

I was a freshman in college when I signed up for Facebook; there are some friends I don’t need updates from anymore. Perhaps this could be my adult version of Facebook. (Then again, I’m interested in gaining more Google+ connections, so I’d pretty much accept anyone at this point).

I love the Circles idea. I’m glad Google wants to learn from Facebook’s biggest mistakes, particularly in the area of privacy. Of course, will anything be private from Google now?

I commend Google+ for their “invite-only” launch technique, which is something many new sites are opting for.

The invite-only makes it feel exclusive and is becoming the way to entice new users in a world where there is an overwhelming list of social networking sites.

In my opinion, to ensure Google+ doesn’t become defunct, 750 million people need to jump on the bandwagon. That means 750 million people need to abandon their comfortable Facebook personas and habits and learn an entirely new interface, albeit very similar to Facebook. They need to download a new app, add all of their friends and start +1-ing all the content they previously “liked”.

These are some major hurdles to ask of people before they know whether or not it’s here to stay.

The bottom line is: I like Google+. I think it’ll thrive, only in a smaller social space. For now at least, it is certainly being used by a pretty niche group.

Our office has been a-“Buzz” over Google+, so we decided to ask a few members of the WebFX team to speculate on where Google’s latest endeavor is going to go:

Where do you see Google+ in 3 years?

Trevin: Three years seems like a lifetime in “Internet years” so it is very tough to say, especially this early on. They have had their misses, but most of the time Google’s side projects turn to gold, so I’d wager it will be extremely popular and still pushing the social media envelope in three years.

Saurav: As social is becoming more and more effective, in three years’ time, I see Google + becoming one of the social forces competing against the likes of Facebook.

How do you think Google+ will affect SEO?

Mary: It already is. I can easily +1 any article I read or website I land on with simple click of a button.

Then those in my Circles will see my partiality reflected in their own search results. Marketing professionals and business owners alike need to be aware of the huge potential here. Google provides personalized results whenever feasible, and that component is only sure to evolve.”

Xander: Well, the whole reason they launched this venture was to get Facebook’s content recommendation data without dealing with Facebook.

Google wanted to create an ecosystem where shares, like, and comments were completely accessible to them so they can parlay that data into their search algorithm and promote worthy content. Up until now, they had no reliable way of determining the “social value” of a page. If Google+ takes off, they will.”

Are you, or do you, plan to use Google+ personally?

Trevin: Yes, I’ve been using it daily for a few weeks. I jumped in with both feet!

Saurav: I haven’t had the chance to fully utilize it just yet.

But, it’s simple really; you create your profile and connect with others.”

Bill: Yep – since it’s going to be a ranking factor, I will have to use it.

Trevin: There are a lot of features I like. Circles is a pretty well-thought out way of dealing with sharing among your friends.

(Facebook always had the same functionality, but it is a lot clumsier in lists). Some of my friends love when I share Battlestar Galactica videos, but others just find it weird. This is a nice way to break everybody into clusters, which is how we all socialize and interact in real life.

I also love being able to add writers and pundits whom I enjoy to my “following” circle. It’s far more efficient than following their fan page on Facebook and getting slammed with promotional junk. The following circle is like being Facebook friends with somebody you don’t really know without the awkwardness.

My favorite feature, though, is Hangouts. Group video chat is awesome and I have pretty much already ditched Skype for video calling.

Bill: Video chat – and circles is a cool concept!

What do you dislike about Google+ so far?

Trevin: It still feels unfinished, which it is of course, so I don’t have any big worries. There are a bunch of little things missing … collapsing comments and posts, notifications are slow, no iPhone app, etc.

I would also like to see some sort of groups feature where a bunch of my friends who share a common interest can join and everybody can share information amongst the group, rather than in all of our different Circles.

Bill: It feels like Google is a monopoly and controls too much of the Internet already.

Mary: I actually don’t like the idea of leaving people out at the beginning, even if it has worked well in the past. I think the real push for Google+ will be once everyone is on it. The only reason I would choose Facebook over Google+ is because everyone I know is on Facebook, I can’t say the same for Google+.

And unfortunately, a lot of people I have invited probably won’t jump on the bandwagon until everyone else has. I think it will end up the way Twitter has, continue to grow as people realize it really is here to stay.

Do you believe Google+ has a chance to take Facebook’s place as the #1 social networking site?

Trevin: Google certainly has a much better chance of taking down Facebook than Diaspora or Virb or anybody else that has to build from the ground up. Everybody already knows and (mostly) trusts Google.

With the way Google+ is built in to the new black Google bar, nearly all of these people are guaranteed to check it out, at the very least. The people will come, it is just a matter of how good the product will be and I haven’t seen anything so far to suggest that it won’t be excellent.

Bill: No – Facebook has too much of a head start and most users aren’t going to switch.

Xander: Facebook has a 750 million people head start, so it will at least take some time. They are positioning themselves to be a legit player though.

The private invites promote exclusivity and that worked for Gmail and Facebook at the beginning. They also have a massive pool of people to pull from—not only everyone with a Google account, but also anyone who visits a Google search property somewhere down the line. I would suspect that they have opened it up to early adopters here to work out the kinks, and then once it’s really ready to go, they’ll roll it out to the world.

It could go either way, though Facebook will be stiff competition, and they are sure to pull out all the stops by adding as many features as possible. Personally, I hope it does in fact outdo Facebook – still, if it does, it will be a slow transition and nothing immediate because there are so many avid Facebook users who will probably refuse to convert for at least a while. I predict it will be like that of Twitter – but a bit more rapid since millions of users already seem to trust Google with their lives.

As you can see, opinions of Google+ certainly vary, especially among leaders in the industry. It’s time to sit back and see what happens!