A Web Developer’s Experience with 99designs

Early on, nearly every startup arrives at a crisis. And I’m not talking about a crisis involving capital or co-founders or legal issues. I’m talking about the company’s logo.

Most customers won’t think twice about your logo. Unless it’s hideously ugly. A company’s logo is the front line for the brand.

It’s the title of a book, or the name of a hero. Mess it up, and you could be setting yourself up for failure right off the bat. But even if you know that the design of your logo is extremely important you still have problem.

Because you’re an early-stage startup with little capital, you probably won’t be able to hire a full-time graphic designer to create a logo or other graphic designs for you. This is the part of the story where 99designs comes in. 99designs, in my opinion, bridges the gap between small businesses and freelance designers.

In a nutshell: At 99designs.com, businesses can create a design contest (such as a logo design contest) that lasts for 1 week. Designers from all over the world can submit entries in the hopes of winning the contest. Once a winner is selected, the designer gets paid, and the business gets full rights to the design along with the design files. 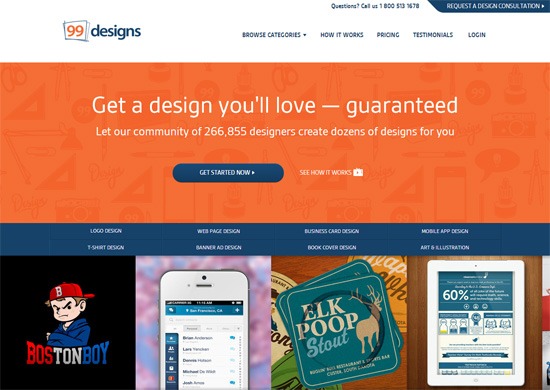 My Experience with 99designs

So you might be asking “Well that sounds great and all, but does it work?” It just so happens that I’ve sailed that sea and the answer, at least for me, is “Yes.” I had just incorporated a new company, MeteorCharts, and found myself struggling to create a logo. Although I’m pretty savvy with Photoshop and Illustrator, and happened to major in visual arts for one year in college, I’m no designer. That became painfully obvious.

I spent about three days straight coming up with design after design, and disliking all of them. I felt paralyzed. There were a thousand other things that needed to be done for MeteorCharts, and I just couldn’t create the right logo.

I needed help. I remembered hearing about 99designs when their unofficial Yahoo! logo design contest went viral, and I thought I would give the service a shot.

I went to 99designs.com, setup a logo design contest, and chose the Silver plan, which is $499. I didn’t want to go for the cheapest plan (Bronze, $299) because I was afraid designers wouldn’t take it seriously. But I also couldn’t do the more expensive plans — Gold ($799) and Platinum ($1,199) — because I didn’t quite have the budget for it. In my line of thinking, more expensive plans yield more talented designers.

99designs promises around 60 design entries for the Silver, Gold, and Platinum plans. After launching the contest (which you can see here) I felt a huge burden lifted from me. It felt really good. 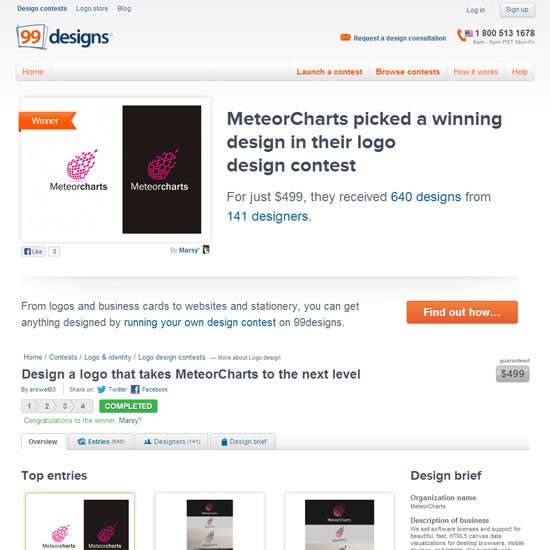 I left my computer for about an hour to go out to eat, came back, and to my surprise a handful of great designs had already been submitted! I was amazed. Over the next few hours, it became evident that a new addiction had taken over me: Checking 99designs every 30 minutes to see new design entries.

I also checked 99designs right before going to sleep every night, and first thing in the morning after waking up. It was a thrill. I spent a lot of time providing as much feedback as possible for every single design entry in order to maintain a good standing with all of the designers, and hopefully inspire them to stick around.

It worked. After three days, the number of submitted designs soared to over 300 — 5x the number of entries 99designs had predicted. The entries didn’t stop there.

I suddenly ran into a scaling issue. On the fourth day, the number of incoming designs gushed like a fire hose, and it became impossible for me to leave feedback for every single entry. I only had time to remove the designs that I didn’t like and provide feedback for the ones that looked promising.

This was really tough for me because I knew that it took a lot of talent and energy to create these designs, and I felt like I was letting a lot of the designers down because I wasn’t giving them any feedback. At the end of the fourth day, the contest had received over 600 designs submitted by 141 designers. That’s 10x the number of entries 99designs had promised.

Over the next three remaining days of the contest, it became clear that there were two designs in the running. After holding polls on Twitter and asking for feedback from friends, I chose the winning design that looked good on both black and white backgrounds. 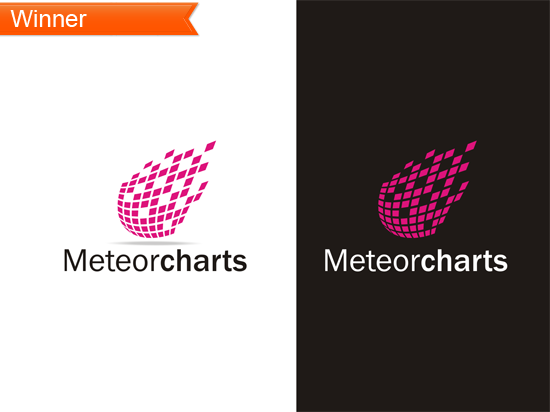 The winning designer also threw in mockups that showed the logo on different materials like walls and concrete which I really appreciated, because it made the logo feel real and tangible.

Once the contest ended, I immediately uploaded the new logo to the website, designed some t-shirts, and ordered business cards. What a ride! I can’t imagine having done it any other way.

The Other Side of the Story

In case you didn’t already know, 99design also has a business model that’s widely being criticized. Robert Wurth, creative director at Freshly Squeezed Design, says that design contests are dangerous for your business. “By running a contest, the company gives up its power to choose a designer based on talent, skill, personality and all of the other factors that make it possible to conduct business with someone,” he said in a blog post.

The NO!SPEC campaign declares that design competitions are “a growing concern.” The campaign considers design contests a form of speculative work (or spec work), and spec work is unethical. “The designers in essence work free of charge and with an often falsely advertised, overinflated promise for future employment; or are given other insufficient forms of compensation,” the campaign says in their FAQ. AIGA, a professional membership organization for design, holds the position that spec work in the form of design competitions is not good for clients.

“Little time, energy and thought can go into speculative work, which precludes the most important element of most design projects–the research, thoughtful consideration of alternatives, and development and testing of prototype designs,” AIGA states. Designer Sarah Parmenter said in a blog post that design competitions breed bad clients. “This client will know he can push you around, expect work at a similar or lower price in the future, probably expect work to be free at some stage with promises of ongoing future work, or exploit your ‘spec’ work to someone who will charge them less than you, and remember, there will always be someone who charges less than you,” Parmenter said in her post. 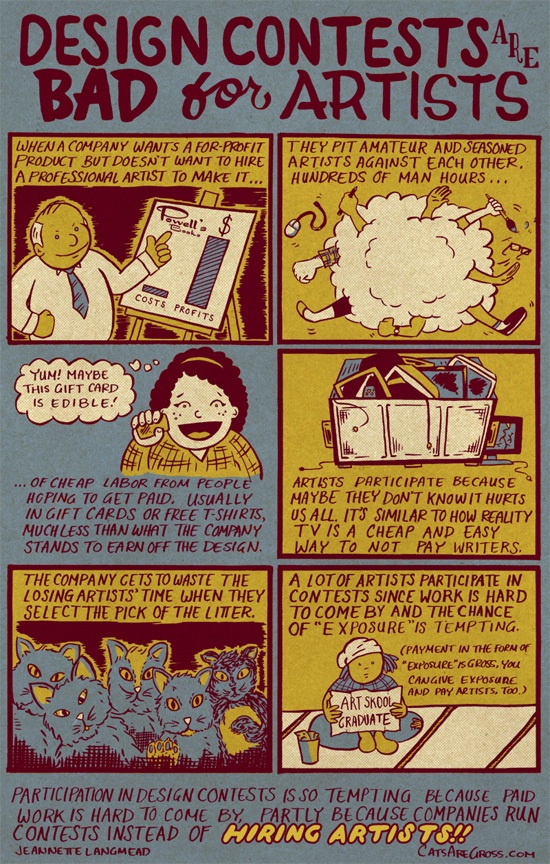 Source: jeannetto.tumblr.com Keep those things in mind whild deciding whether or not design contests are the way to go for your business.

Make your design contest guaranteed. Guaranteeing a contest at 99designs means that you will pay out the winnings no matter what happens. Even if you don’t like any of the designs.

Yes, it might sound unsettling, but when designers pick contests to participate in, they are more likely to choose the ones that are guaranteed. Don’t choose the cheapest option. The most talented designers will more than likely avoid the low–paying contests. Provide as much feedback as possible. Tell designers exactly what you like, and what you don’t like.

This gives all interested designers an idea about what you’re looking for. Never give anyone more than 3 stars while the contest is live. This makes it feel like it’s anyone’s game. If you give entries 4 or 5 stars early on, this may deter other designers from entering.

Don’t choose more than 5 finalists. The final round is a lot of work for both you and the designers, so you don’t want to kill yourself conversing with designers that you don’t really think will win. And you also don’t want to waste their time either. Make sure all of your needs are covered.

Make sure that your design addresses all of the company’s requirements. This might sound like a no-brainer, but for my contest, this is what separated the winner from the runner-up. Don’t focus on small details in the qualifying round. In other words, don’t submit 10 different designs that are all very similar.

Try and come up with as many different designs as possible. Early on, try to create a design without looking at the current entries. Or else you risk falling victim to groupthink. Clients want fresh ideas, not tweaks on existing entries.

Stars mean something. Don’t worry about how many stars you have, but you should make sure that you have at least one design that has the highest number of stars compared to everyone else in the contest. If there are at least four or five other designers with more stars than your designs, it’s unlikely that you’ll move to the final round. Submit at least one “dark horse” entry. A “dark horse” entry is a design that’s submitted just hours before the qualifying round ends, and is typically based on all of the feedback from the other designs.

Eric Rowell is the founder of MeteorCharts, the creator of KineticJS, the founder and chief editor of Html5CanvasTutorials.com, the author of “HTML5 Canvas Cookbook”, and a senior web developer at LinkedIn.

He really likes robots and dreams of one day building his own Megazord. If you’re feeling social, follow him at @ericdrowell on Twitter.