Why SEO Is About Visibility Instead of Ranking

Over the past two years, I’ve heard and read tons of people who use “SEO” and “ranking” as synonyms. But are they really the same thing? For all the more SEOs talk about ranking, Google seems almost determined to change the name of the optimization game to something else. And it kind of makes sense — at least from a user experience standpoint.

Google has made lots of additions to search results pages, like the carousel or shopping feed, that help searchers find what they want. If you’re a marketer, that means you can’t afford to spend all of your time focusing on ranking. Today, SEO is about something much less tangible.

The simple answer is that Google has introduced so many new UX features to SERPs that the #1 organic search result isn’t as valuable as it used to be. A few years ago, the goal of SEO was to rank first for keywords that mattered to your industry.

Now, earning that throne doesn’t even guarantee you’ll get a spot above the fold. Why? Top ads, side ads, shopping, “in the news,” bio boxes, maps results, “did you mean,” carousel, and mobile search all impact the available real estate on SERPs — especially when searches include several of those features all at once.

Like I said earlier, it makes sense from a UX standpoint since Google has become more sophisticated and understands intent. But that also means SEOs need to pick up the slack and play a new game.

One of the biggest challenges for site owners over the past few years has been mobile search, particularly since it became a ranking factor for Google this past April. Aside from the fact that your website now has to be responsive to even have a hope of ranking in most industries, small screen sizes and large, touchable text make it all the more difficult to show up in mobile search — especially when the carousel is in the picture.

The image below is from an iPhone, and while the search term is somewhat broad, it’s a perfect illustration of the point at hand. In this case, users aren’t seeing the businesses that offer movie screenings — they’re seeing the film names instead. 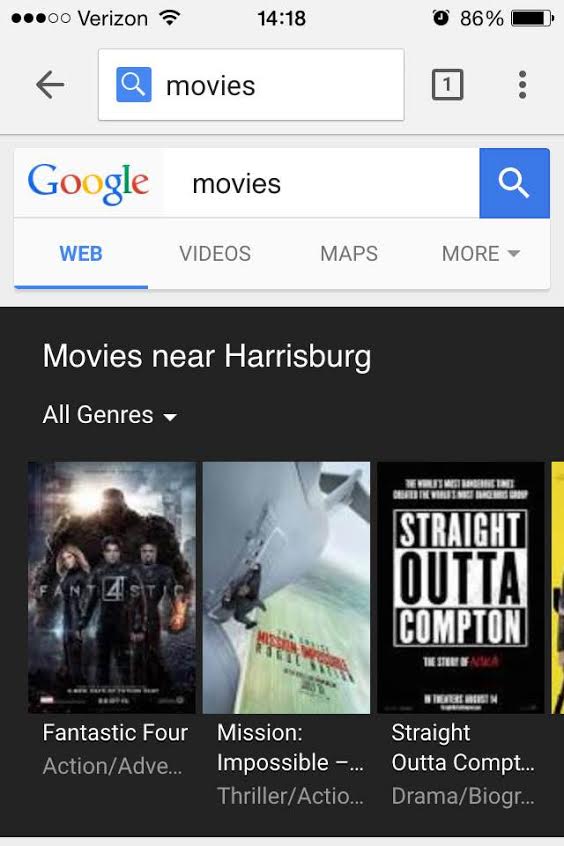 For movie theaters, this is a rough deal.

None of the organic listings show up, and that means theaters that previously depended on the keyword “Harrisburg movies” don’t show up until someone scrolls down the SERP. In this situation, the carousel is an SEO killer. And it’s not the only hurdle on mobile, either.

Bio and maps results do the same thing as the carousel — organic search results, including the #1 spot that you fought so hard to get, aren’t visible above the fold. 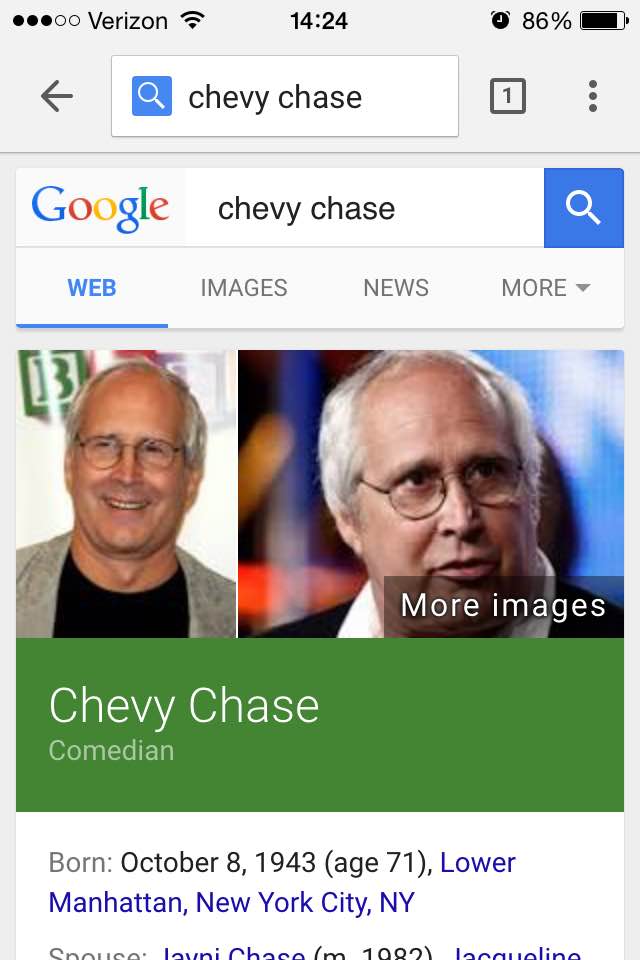 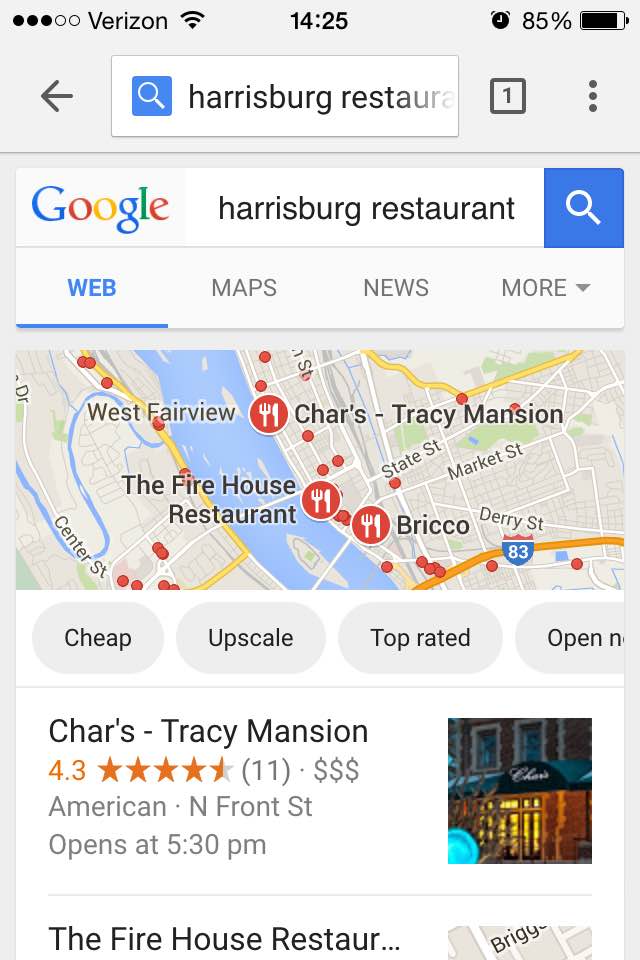 So if you want to attract mobile users — which you should since 50% of all mobile searches are for local results and 80% of those convert — you need to give Google as much information about your business as possible. Some industries are in worse shape than others on mobile.

Movie theaters can’t compete with the carousel, and not even Wikipedia can fight the bio box. With something like a restaurant, you at least have a fighting chance, but only if you’re registered with Google My Business and you’re close enough to the user to be shown in Maps results. If that’s the case, then you don’t need to have the best website in your entire industry — Google just has to know more about your business than your competition.

There are other complications with mobile, especially since the news box can push your position below the fold whenever something interesting happens in your industry. But for the most part, you need to rely on your accounts with Google and local search more than the on-page elements that might’ve helped you rank well a few years ago.

Ranking on laptops and desktops

The sheer volume of ads on Google is staggering, especially the quantity that target desktop and laptop users. While ads can also affect mobile search, it’s a much larger force for desktop results. Basically, if you’re only targeting high-value keywords using SEO tactics — meaning you don’t have a PPC plan — you could be in real trouble. 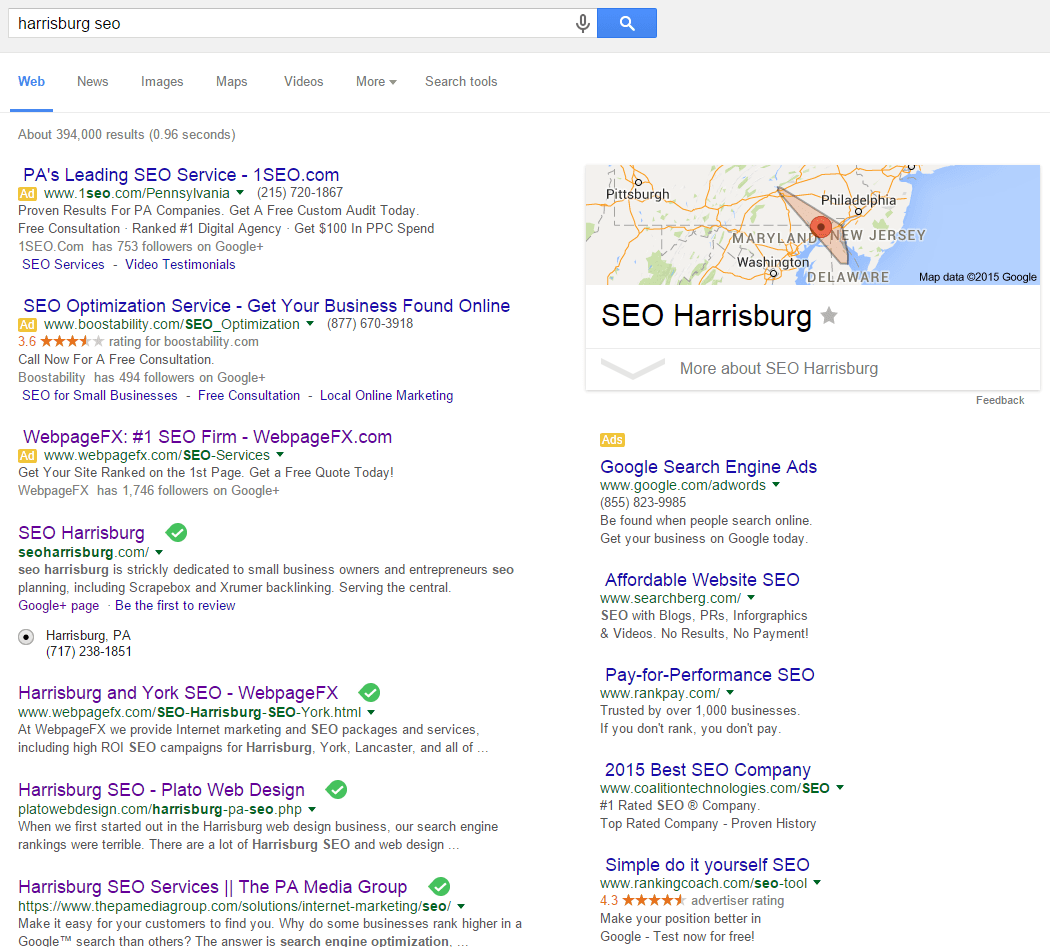 While organic listings still command some form of trust, a searcher might have to slog through three ads before noticing your #1 ranked listing. And even if they skip to the organic listings, the yellow “Ad” widget is pretty distracting, even when it’s all the way in the right column. Plus, this example illustrates another point — not even PPC is a safe bet when it comes to visibility.

If you’re targeting “Harrisburg SEO” and you haven’t built your quality score or ponied up enough cash, you’re not even making an impression. AdWords might say you are since your ad showed up in a search, but if it’s below the fold, searchers might not even see it. Without the addition of Maps and other Google functions, PPC ads could be a sure bet to getting listed above the fold.

But when they’re mixed with visual features like Maps and Shopping, your budget-conscious PPC campaign might not be as visible as AdWords says. But it doesn’t stop with ads — there are still other challenges to overcome with SEO visibility on desktops.

For ecommerce sites, it’s hard enough to show up on SERPs when you have so much competition. But when you use Google Shopping, your SEO strategy can quickly get more complex. 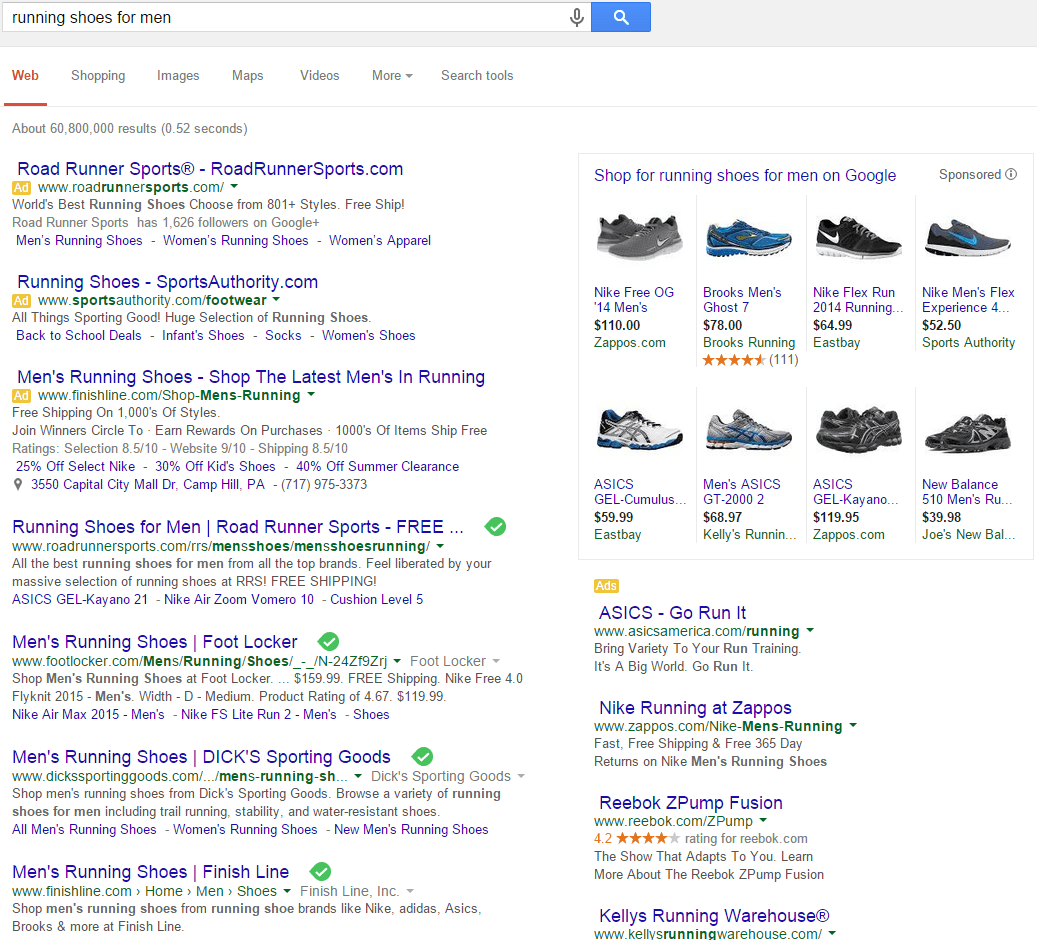 On the one hand, Google Shopping might help attract customers to you.

On the other hand, it can distract Google users from your organic listings and point them to Shopping results instead. That’s a lot of information on one page, especially for a long-tail keyword. The ads are doing their job, but the shopping results add a whole new distraction to the page.

And it’s not just the use of yellow widgets — it’s high-res, eye-catching photos. If you aren’t included in the Shopping section of the search results, you risk getting pushed further down on your page, making it harder for customers to see your business. Plus, people prefer images to text, so your text-only ad is at a disadvantage when it’s up against image-heavy shopping results.

However, depending on your SEO strategy, this variety on SERPs can work to your advantage. You can set up a Google Shopping feed through Google’s Merchant Center so your products will show up along with your competitors. And after that, you can use SEO and PPC to get three listings for your company on one SERP.

While it may not sound like much, every spot you have on a page is a spot that your competitors can’t use. That makes Google Shopping feed one of your best assets — especially if you want to saturate search results.

Tweets are a part of Google search results. Whether they’ll stick around or not remains to be seen, but for now, they’re the newest addition to SERPs. 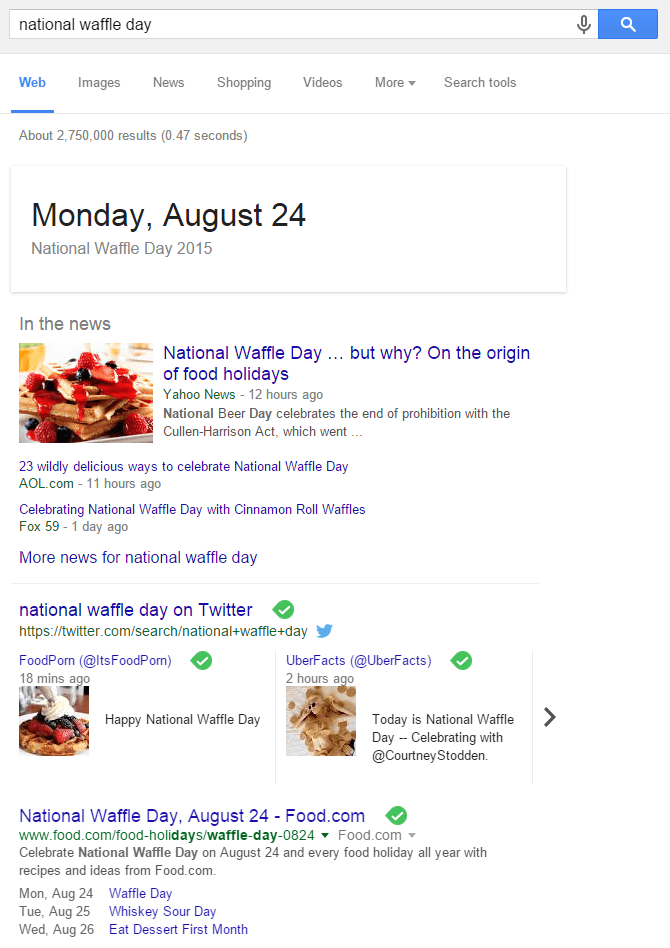 Google’s Twitter results aren’t that big — in fact, they’re pretty reasonable, considering how many other tweets Google could’ve added to a page.

Still, the tweet box is roughly the size of one and a half organic listings, and when that’s combined with other features (like News and Images), it really adds up. The regular rankings for this search actually start immediately under the Images results, so they’re really close — but that’s still below the fold. Close only counts in horseshoes and hand grenades, and SEO is about calculated precision.

It’s just a shame when that precision is overruled by Google’s preferences. The other interesting part about these results is that it’s the first time we’ve seen Google endorse a social media platform that wasn’t Google+. Who knows if Google will continue adding social media feeds to their SERPs — but for now, Twitter is the only addition that SEOs need to worry about.

The only sure thing about SEO is that it changes. And in this case, it’s changed a lot. If you’re not convinced and you still want to run an entire marketing campaign exclusively with SEO, you’re free to keep at it.

But you probably won’t get the results that you would’ve had last year, and it’s important to adapt your strategy to more effectively use your time and money. If you want to update your Internet marketing strategy, you have some options at your disposal. Twitter is arguably the most important social network now since it’s shown directly in Google, so it’s important to get an account for your business.

It’s also important to use PPC, Google My Business, and other platforms to make sure you’ve covered all of your bases.

Giving all of your basic business information to Google My Business and Google+ is more critical than ever if you want to show up for local searches, especially on mobile. While smartphones are starting to embrace larger, more touch-friendly screens, there are still plenty of small-screen iPhones and Droids that simply can’t show that many results at one time. If you want to optimize your reach, you need to do everything you can to get to the #1 result in Maps listings.

If you’re not using PPC, start using it as soon as possible. Even if you have the #1 spot for the best keyword in your industry, take out an ad so you can start climbing those rankings too. Build your quality score with eye-catching ads and outstanding landing pages that all abide by Google’s rules.

And, if you can afford it, bid high!

If you’re in ecommerce, it’s essential to list photos with your products and start a Google Shopping feed. Ecommerce sites can’t get by with just SEO anymore — you need as many outlets as possible just to compete. Use high-quality, original photos as often as you can, and regularly run your Google Shopping feed via an FTP client like FileZilla.

Ramping up your Twitter presence and engaging more users with tweets is most likely a good idea right now since it doesn’t look like tweets are fully integrated into search results. Regular, scheduled tweeting and customer interaction do more than build customer relationships now — they also make you visible on Google! What do you think about visibility and SEO?

Do you feel the importance of organic listings has shifted over the past several months? Let me know in the comments!