How to Handle a Social Media Crisis on Every Network

Social media essentially hands everyone a megaphone, and it can make it more challenging for businesses to manage their image if something goes wrong. But just as social media makes marketing more authentic, it also enables businesses to respond to a crisis in an especially effective manner. The trick, of course, is knowing what to do, where and when.

Here are some examples of the kinds of crises you may encounter online, as well as guidelines for using each social media network appropriately to manage different issues that may occur there.

Understanding the type of crisis you are facing is often the first step in knowing how to appropriately respond. If you are experiencing a product crisis, you’ll want to deal with it differently than you would a crisis with an individual employee or the environment. 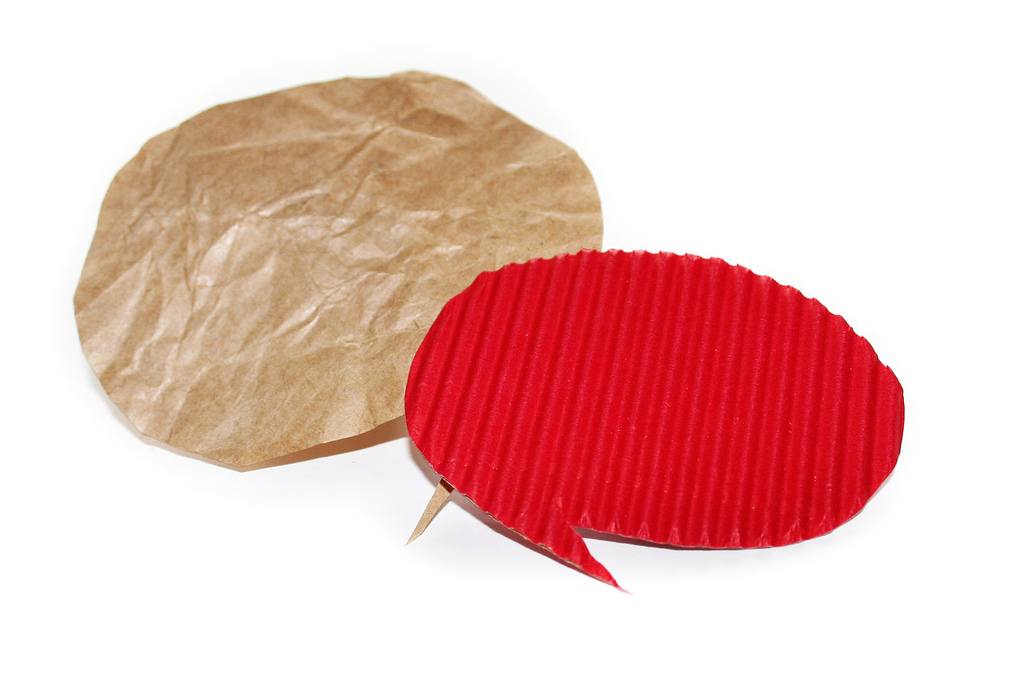 A crisis is not always something within your direct control, or caused by your actions.

Here’s a brief rundown of the basic crisis types, which we’ll follow with some advice on how to handle them on social media.

Product-related crises cover anything that relates to the distribution, designed function and use of your products. If a product, or part of your product, is malfunctioning, needs to be recalled, or is somehow found faulty, you may experience a product crisis. Classic examples of this type of crisis include the recent Chevy ignition switch failure, as well as the Johnson & Johnson Tylenol tampering.

A service-related crisis is anything related to poor customer service. If you begin to hear negative feedback regarding your company’s customer service, employee’s attitudes, or company’s field personnel, you may experience a service crisis. A few examples of this include any number of cruise ship accidents (for more reasons than one), and the “United Airlines Breaks Guitars” crisis, which was caused by the company refusing to offer adequate replacement for a single guitar broken by a baggage handler.

An internal crisis covers anything regarding disgruntled current or former employees. If you begin to hear negative talk or gossip, or see negative internal reviews posted online, you may experience an internal crisis. We’ve seen this type of crisis before with the very public Goldman Sachs resignation and HMV, among others.

This type of crisis would apply in any situation where an employee or consumer is directly injured, or dies, as a result of some failure in the organization. It covers accidental deaths, falls, food safety issues, OSHA violations, and things of the like. If you’ve received word of toxins, poisons, or a higher-than-normal number of accident reports, you may be at-risk for a personal injury crisis.

One example of this crisis is Exxon, whose public image continues to be impacted by the 1989 oil spill caused by one of its ships.

The most important thing to remember in managing a crisis is that a crisis is not what you deem important — it is what your audience deems important. If they are upset by something you did, real or imagined, serious or blown out of proportion, it matters and you need to handle it gracefully. 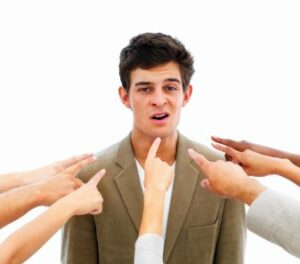 Online tone is easy to read too much into. Be overly friendly and compassionate so that your responses are not seen as harsh. Do not silence your audience.

Some of the biggest mistakes you can make are to shut down lines of communication between you and your audience, or to say something once and assume your whole audience heard it. Repeat your key messaging over and over. Remember to respond in kind.

If the issue erupts on Facebook, it’s not a great idea to send a formal statement to the media. Address the issue where it occurs and spread to other platforms as able. Be sure to address their concerns, no matter how invalid you feel they may be.

Although the crisis is about your company, it’s never about how you feel. Every crisis starts and ends with consumer reactions to your actions, so treat each one as important. You never know who is on the other side of the keyboard.

How to Manage a Crisis on Social Media

Social media is hard to manage in a crisis. It’s a lot of people telling you what they think in a very public forum and all in real-time. Read on below for some practical best practices for some of the top platforms. 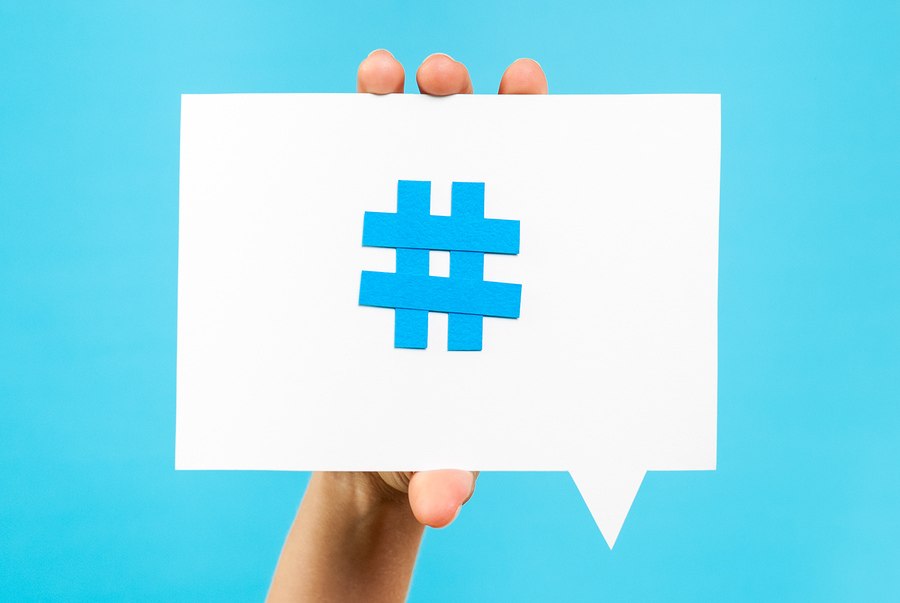 Guidelines for Every Social Media Network

Best practices for annoying content or inappropriate content is to “hide it.” This lets you avoid confrontation with the individual who posted because they, and their Facebook friends, can still see it, but your general audience cannot. They won’t know you hid it.

Treat all users as equal. You never know who’s behind an account. Not all “movers and shakers” identify themselves as high ranking business people or influencers.

Treat all complaints online as equal. It just takes one retweet by the wrong person for things to get out of hand. Use the DM feature to keep the conversation private, but know that a screen shot is always possible.

The easiest step in this case is to take down the offending pin. There is no general comment board to complain on, but know that the pin might have already been sent to other users, favorited and re-pinned by the time you take action. Pinterest content moves fast.

LinkedIn does not allow a user to post freely on a company page. We recommend using tools to look for mentions (also good for Twitter and Facebook), and monitoring your comments on any posts from the company as a whole. Delete anything offensive or profane for the good of the community.

Content should be deleted only if it violates a platform’s terms and conditions. Just because someone is upset does not mean you can silence them. Deleting the comments of an enraged customer will not put out the fire, it will fuel it.

It might not “feel good,” but address the problem and work to fix it, even if it’s embarrassing or a simple misunderstanding. Deleting content just because it’s not positive is spin, and spin is harmful to current and future efforts by your company to build a relationship with your customer base. By working to fix a situation, you can work to build a bridge instead of burn one.

In early 2013, Victoria’s Secret accidentally launched itself into a crisis. The spring/summer line of PINK, a subsidiary of Victoria’s Secret, launched a new collection with the tagline “Bright Young Things.”  The CFO of Limited Brands, parent organization to both Victoria’s Secret and PINK, had a miscommunication in a statement about the line that quickly escalated: 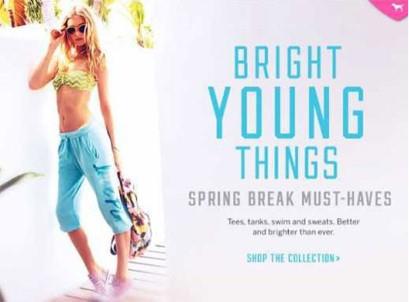 The PINK spring/summer line was meant for college-age women, not young girls, but this quote seemed to indicate otherwise. Since the line included underwear with print reading “call me” or “feeling lucky,” there was an immediate backlash from those who felt the line was inappropriate. As with any crisis, there was a way to fix it, but VS reacted poorly from the get-go.

They disabled posting on the PINK and general Victoria’s Secret Facebook pages, and had no response to the outrage on Twitter. In less than seven hours, the original Facebook post amassed over 1,100 (mostly angry) comments, in addition to 3,000 others posted before commenting was disabled. 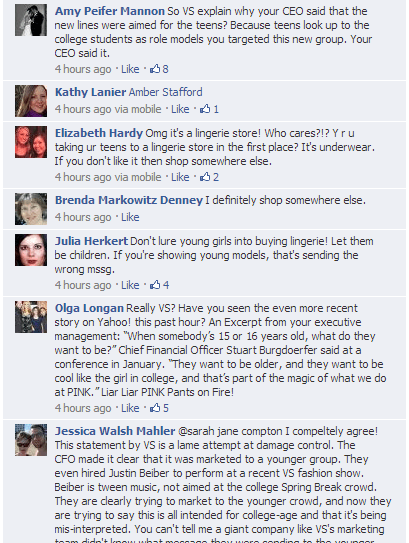 So what could they have done better?

This issue could have been largely avoided if Victoria’s Secret had just taken the time to respond appropriately, instead of ignoring and then disabling comments by their fans. The issue started as a misunderstanding, but evolved into a crisis because they refused to acknowledge how their audience could have been upset.

Their lack of response in a previous crisis cost them several millions of dollars in cancelled and discontinued products, as well as reputation damage. By creating a crisis communications plan, forming responses in a timely manner, responding with courtesy, and being in constant communication with your customer base, you’ll handle a crisis far better than if you “wing it.” Learn from your past mistakes and plan ahead.

I hope this guide to handling a social media crisis has helped you in some way.

Want to learn more about our social media or crisis and reputation management services? Contact us or give us a call at 888-601-5359. Photo Credit: Marc Wathieu, Simone Lovati, Ognian Mladenov