By Trevin Shirey  ~ 9 minutes to read
Trevin is the Sr. Director of Business Development at WebFX. He has worked on over 450 marketing campaigns and has been building websites for over 20 years. His work has been featured by Search Engine Land, USA Today, Fast Company and Inc.

Facebook is updating its newsfeed again. In what some bloggers are already calling #friendmageddon (because marketing can’t go a year without the world ending), Facebook plans to emphasize personal stories and de-emphasize third-party content in newsfeeds. That means Facebook users get to see more stories from their friends and family.

But it also means they get to see less of businesses — like yours. That’s just the tip of the iceberg. These five points go into more detail about the potential impact of “#friendmageddon.”

The short version of this update is simple: Facebook wants to promote personal stories over page stories. That means you’ll probably see a decline in the organic reach and engagement of your page content. In an official statement, Facebook said they “anticipate that this update may cause reach and referral traffic to decline for some Pages.” But that’s not the biggest problem with the update.

The biggest problem is that page traffic has already declined. SocialFlow already observed a 42% drop in organic reach from January to May. 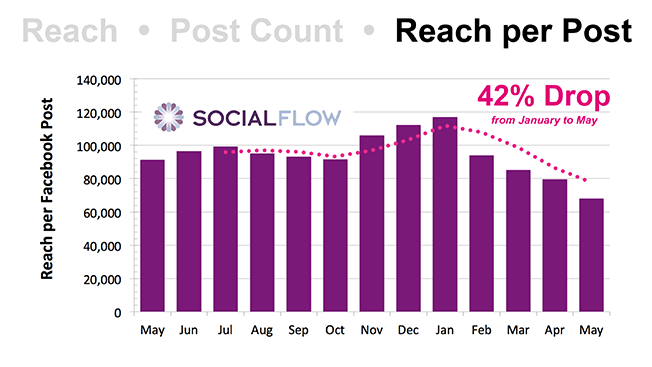 Graph via SocialFlow So how bad will the newsfeed be after implementation?

That’s an open-ended question that we can’t answer quite yet, but it’s definitely concerning. At this point, your best bet is to monitor your organic reach and seriously consider using Facebook’s paid options if you haven’t yet started. But that’s only if the decline in organic is extreme.

There’s no reason to expect that — at least not yet.

The friend of an employee likes your page, and their profile indicates that they’re also interested in weight loss and dieting. Running shoes are related to that — so you would expect that your company’s posts would show up organically on that person’s newsfeed. But right now, that’s up in the air.

That kind of semantic association may be a bridge too far for the new Facebook algorithm, at least based on what we currently know. However, just because you’re not directly related to someone’s interests doesn’t mean you can’t reach them. Let’s go back to that friend of your employee.

Let’s say you share something on your page that highlights a shoe sale you’re having. That employee shares it, too. Now we’re in a different ballpark.

You need the support of users behind each individual post to get the organic reach you want. And if you can’t get that, your page may be in trouble.

This is probably the scariest possibility for publishers. If you can’t reach people organically, are you stuck with paying for promotion? Is organic virality dead?

Of course, it’s still too early to tell. But collectively, Facebook page users can assume that there’ll be an increased emphasis on paid promotion if organic reach continues its decline. That means more publishers paying more money for the same amount of exposure.

In other words, it’s lost money for advertisers. With Facebook’s biggest interest still being social networking — as opposed to delivering news or Page posts — it’ll be interesting to see how far they take this newsfeed update, since it could completely change the minds of advertisers. If pushed too far, will companies shell out the cash to stay relevant on Facebook?

Or will they get sick of the social network and try their luck elsewhere? That’s an easier question to answer for some companies more than others. Smaller businesses will obviously feel more of a pinch, and larger businesses will have the upper hand against smaller competition.

So if you’re a small corner store just trying to sell to the people in your neighborhood, now is a good time to emphasize your Facebook presence.

Popularized in this Bloomberg article, “context collapse” refers to changes in relationships as a result of shifting from face-to-face interactions to digital interactions. For Facebook, that refers to users who share more content from the Internet instead of information from their personal lives. Personal stories declined by about 21% in 2015, and non-native content filled the gap.

That kind of behavior mimics real life, to an extent. The average Facebook user has 200 friends. If you were sitting at a table with 200 other people, would you talk about an intimate personal story or something you saw on TV?

The lack of personal, first-hand content is mostly worrying to Facebook since it means the Facebook experience has shifted. It’s no longer about friends talking online — it’s about topical discussion. That also means it could be harder for Facebook to properly target user interests.

After all, if people aren’t posting their own thoughts, it’ll be harder to infer their interests. Facebook will still have third-party content to judge interest. But that’s not as convenient or straightforward as someone just saying “I like ___” on a newsfeed.

We’ve tackled what Facebook’s newsfeed update will do. It’ll refine users’ newsfeeds to only include brands that have dedicated, enthusiastic followings that post relevant content (as far as businesses are concerned). But what companies actually have the means to gain millions of followers and regularly publish high-quality content?

The big ones. Major brands. The businesses that already have enough money to pay for focus groups, television commercials, and product placements.

These are the brands people already recognize. That means that in most cases, they’re already the brands with the most followers on Facebook. So the major brands of the world will continue getting decent organic exposure after this newsfeed update — and they’ll get it for free.

Meanwhile, the smaller companies that are struggling to build an audience in the first place will have to shell out from a limited budget in order to get positive results. On the one hand, this is a case of quality control. Bigger brands have the finances to invest in quality, engaging content.

Smaller brands don’t. On the other hand, this is edging out “the little guy,” like so many other marketing media have done before. This is especially true because as companies shift more toward a paid focus, they’ll increase the demand of paid ads to Facebook.

That’s a sudden increase in demand (advertisers) with no increase in supply (advertising audience and/or ad space). In economics, that’s called a “shortage,” and it makes prices skyrocket. 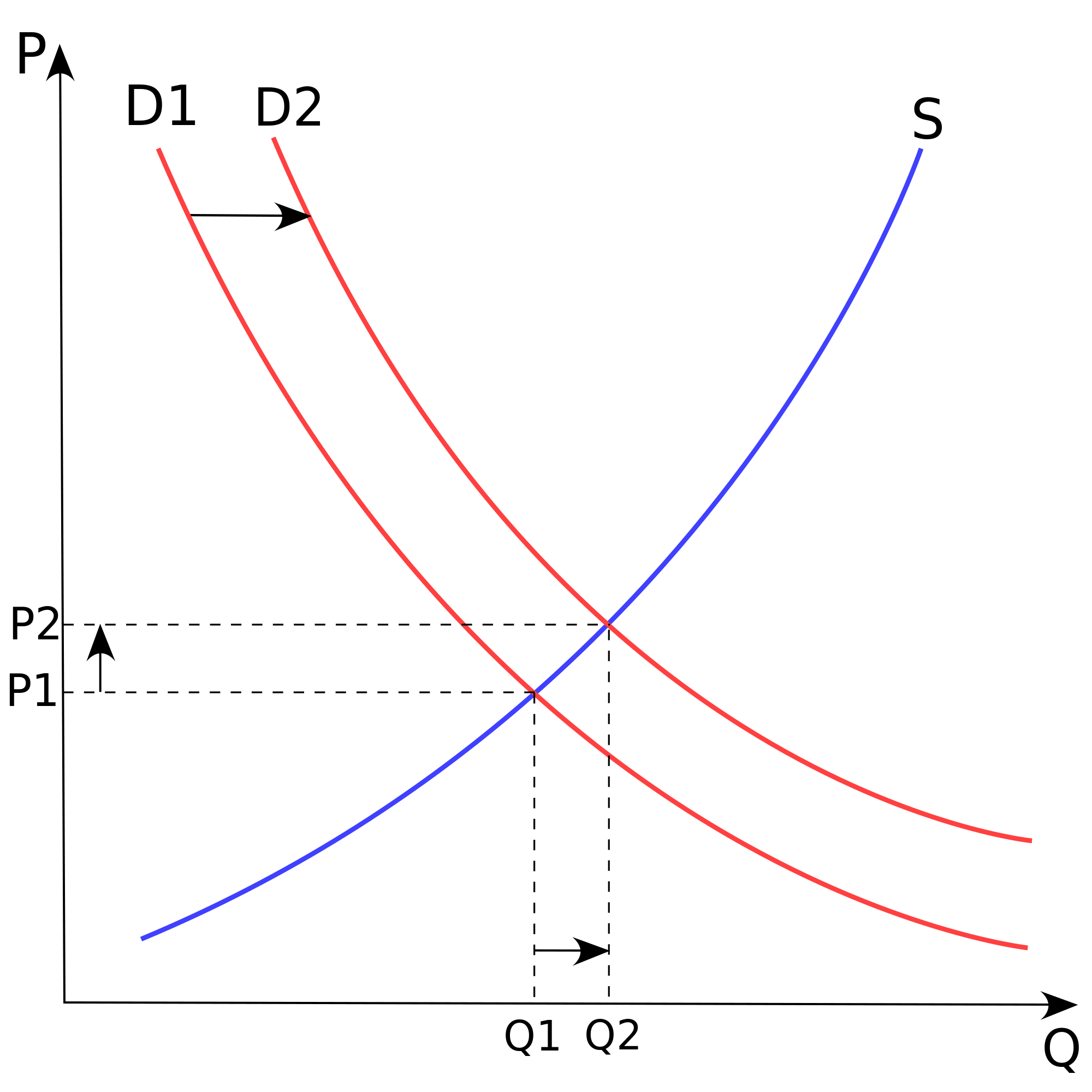 Facebook is relying on the fact that they have 1 billion+ users to appeal to its advertisers.

But if lots of advertisers start paying for more paid promo, they have more advertisers trying to reach a stagnant audience. So Facebook has two possible options:

Based on Facebook’s statements, they probably won’t do anything since increasing the number of ads in the newsfeed would take away from “personal stories.” With that in mind, it seems likely that advertisers will have no choice but to compete for the same limited ad space and audience. That competition can drive prices for individual ads up without offering a similar increase in results. Granted, this is all hypothetical at this point.

But economic principles aren’t wrong very often, especially when it comes to the basics of supply and demand. The unfortunate bottom line is that you should expect to buy more ads — and spend more for each one.

There are a few possible solutions you can try to keep your head above water after this new Facebook update. First, make “better” content. That’s going to be the mantra for this update all around.

Only share your best, and if you can’t describe content as “your best,” then don’t bother. This is Facebook’s biggest advice to businesses, and those businesses have predictably become outraged at Facebook’s vagueness. With so many updates happening to Facebook — especially this one — “better content” is probably the most subjective concept in the industry.

Second, pay to boost viral potential of content. Paid promo is a staple on Facebook, and this update makes it significantly more important. (Side note: It’ll be really interesting to see how Facebook’s revenue changes after implementing this newsfeed update.

It’s probably smart to buy Facebook stock right now.) Third, concentrate on building your audience. But the problem with that is that it just got much harder to build an audience from scratch, especially if you don’t have the money for paid promo. But if you don’t have a regular audience of passionate fans, your Facebook presence simply won’t have the power you need to get more customers.

Facebook just became a winner’s game — just like SEO. Fourth, look at other traffic generators. If Facebook organic reach is a staple of your site’s traffic, start utilizing Pinterest, Twitter, LinkedIn, and other social networks more frequently to make up for expected losses.

Fifth, pay more for Facebook ads. If Facebook is the best way for you to get traffic and customers, you may not have a choice on the issue. You might have to shell out more for the same level of response.

How will the newsfeed update affect you?