There’s an unspoken understanding amongst web designers that the most valuable marketing real estate is Google’s “web design” front page. With over 300,000 searches monthly and thousands of dollars spent in search advertising on an hourly basis, the value of a top placement for terms like “web design”, “website design”, and “logo design” can often be financially crucial to web design businesses. You’d think, then, that Google and other search engines such as Bing would spend their time monitoring the top web design pages for link spam and other unethical, black hat search engine marketing tactics.

However, it appears that Google’s “web design” results are fairly unfiltered and loosely regulated, as a quick scan of their inbound link profile will show. Armed with Yahoo Site Explorer and a desire to see what makes the most valuable keywords in the web design industry tick, I checked the first page for any unusual rankings, unethical marketers, and interesting search results. What I discovered was quite alarming: The same black hat SEO tricks that have been used for years are still helping short-term search engine marketers make their way into the top search engine results page (SERP). From link spam (also known as spamdexing) to manipulative page widgets, there’s an alarming amount of dark SEO tactics going on in the web design world.

This article discusses SEO techniques that a few disreputable web design companies are using, and what they mean for ethical web designers.

Almost all of the top-ranked results for the search term “web design” showed some signs of proactive search engine optimization. Many used HTML and content optimized for search results. In other words, most had content that was specifically designed to target terms such as “web design” and “website design”, and the majority made use of interlinked pages and cunning anchor text.

That’s all well and good — I guess — at least in the eyes of Google’s auto-indexing bots. What’s a little more surprising is that many of the top-ranked web design sites appear to have built at least some of their inbound link profile by using blog comment sections that allow the commenter to leave a URL, as well as placement of links in blogrolls–a list of other blogs that a blog recommends to readers. This tactic has been around for years and can be used to improve a website’s search engine ranking, but in Google’s terms, isn’t natural link-building. 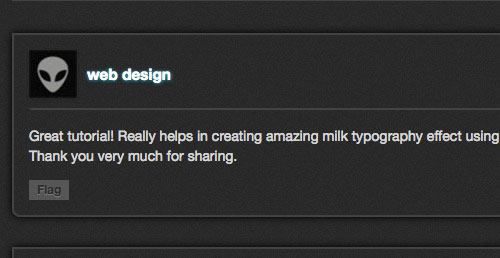 Blog comments, sometimes automated, are still used by shady sites. It’s quite unnerving to see such low-level SEO tactics working for these artificially promoted sites. Does this type of strategy really work for such competitive terms? While it makes up a small percentage of their total link profile, it’s still an interesting thing to see for an authority website.

The search engine has punished websites in the past for exploiting inbound link texts (e.g. the fake credit card story of a few years back), but generally accepts that site owners will try to influence users into picking a specific link text. Some of the websites ranking for the term “web design”, however, appear to be taking things too far; well beyond Google’s motto of “Don’t be evil.” 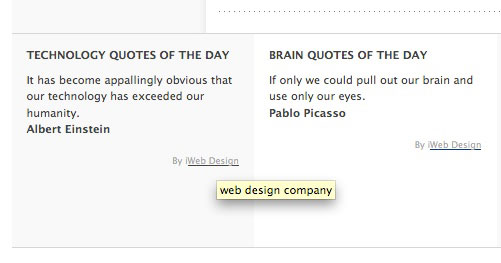 These links were spotted in the footer of a client’s website, and use an obvious manipulation of the designer’s company name.

Notice how the first letter of the company name was left out of the anchor text. A quick scan of the backlink profiles of many top-ranked web design sites shows that unscrupulous web design firms are using their clients’ websites to build their backlinks. While third-party websites produce links with normal, generic terms such as “website” or “info” to link out to commercial websites, most of the inbound links to design sites use ultra-specific anchor texts and appear to be self-created.

Back in 2006, the SEO community was obsessed with manipulating PageRank through MySpace by using graphics and widgets. The images, often embedded in a table, would appear on profiles and other high-value pages with an outbound link placed below them.

This could, theoretically, give a higher PageRank (PR) value to the linked website and increase its placement in search results. For the most part, these manipulative tactics aren’t that effective anymore. Google’s algorithm has evolved beyond the days of PageRank manipulation, or at least the unsubtle manipulation seen in the days of MySpace.

While outdated PR-boosting techniques have died out, some shady web design companies have found a new way to gain inbound links and trickle-down PR through site widgets that display Twitter and Facebook updates. 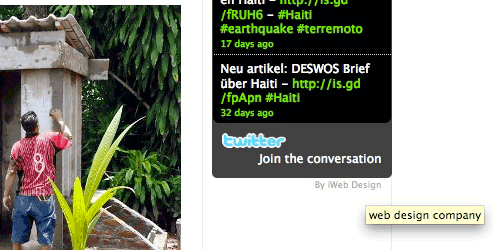 More obvious anchor text manipulation; this time in a Twitter widget that’s used on thousands of popular websites. Check the screenshot above for an example — the linked page has gained most of its “web design” links by distributing a branded Twitter widget. What’s interesting about this example is how their outbound link is displayed — while it’s technically branded as their business name, the first letters from their name have been excluded to ensure that PageRank is passed with the right anchor text.

Shady, right? This type of manipulative inbound linking has been used on all the major design-related terms, making it difficult for organic search engine results to break through. While SEO is very much an effort-based marketing field, it’s unlikely that Google and other search engines appreciate this kind of PageRank manipulation.

It would be interesting to see how long these types of links will remain valuable, as search engines tend to use disincentives and penalties to push down websites that manipulate their anchor text in this way.

What does this near-constant search manipulation mean for ethical web designers and web design companies? Unless you plan to target small, niche search terms like affordable web designers that love cats almost exclusively, the likelihood is that your website won’t rank well for volume-based keywords without the same SEO work. 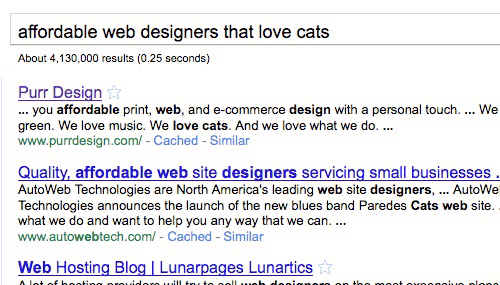 Without an active SEO campaign, it’s unlikely you’ll rank for anything more than ultra-niche search terms. Are these disreputable web design companies affecting the relevancy in search results?

Possibly. While there are some relevant results in the first page for terms like “web design” and “website design”, such as the Wikipedia entry on web design and the About.com pages for web designers, many search results are of commercial websites that have participated in unethical SEO practices. It’s possible, though, that Google actively monitors some of the more popular web design keywords, which could potentially limit the effects of these black hat tactics.

Linkspamming and Other Blackhat SEO Tactics Are Still Effective

Comment backlinks, manipulative links, and self-created links are one thing — and their effectiveness is questionable due to no-follow rel attributes that most blogs implement — but spam, what’s known as link spam or spamdexing in the context of SEO, is another game entirely.

While most web design company sites appear to have gained their backlinks at least somewhat ethically, there are two results found on the first page alone that have gained their positions almost entirely through link spamming. 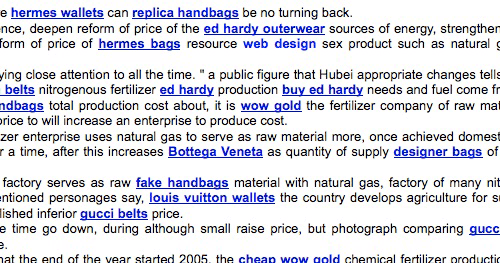 It’s rare to see a service-based business resort to keyword spam, but this Chinese web design firm has succeeded in doing just that. One is an offshore Chinese design site, which appears to have gained the bulk of its backlinks by publishing automated blog posts. It’s not often you see “web design” listed alongside common spam terms such as “levitra” and “Louis Vuitton Replica” if your backlinks are organic.

Check the screenshot above for a quick look into this website’s backlink profile; it’s quite alarming on such a competitive search keyword. What’s clear is that unethical search strategies — spammed links, PageRank manipulation, and other shady tactics — still work. And, often, very effectively.

If it’s possible to gain a front-page SERP listing with little more than automated blog posts and spammy links, it seems unlikely that legitimate and ethical design company websites could ever rank well, let alone for a competitive and valuable search term like “web design”.

Can a natural link profile compete with the big players? Unlikely. Search appears to be an area that is lucrative for those with questionable ethics, given the amount of websites ranking for high-value terms in the web design industry.

It’s troubling and saddening to say this: It seems very unlikely that a small site, particularly one that hasn’t been aggressively marketed because of budget restrictions or because of ethical beliefs in artificially growing their search engine ranking, could ever rank well for major design keywords. And that sucks because amazing web designers are out there, but are being outcompeted by those who would rather spend their budget in gaming the system rather than investing in things that improve their products (such as hiring talented designers).

It’s difficult for an ethical design firm to compete with opponents that use link spam, automated blogs, and other nasty tactics. However, there’s still hope of success on the front page.

Advertising is available through Google AdWords, albeit frightfully expensive for those based in large markets like ours. Similarly, the amount of time and effort required to compete in organic search results just isn’t realistic for many small web design firms. Freelance designers and small boutiques studios, it seems, just can’t compete with big companies and shady spammers.

Is There Hope for Web Designers with a Conscience?

At this point, it’s hard to tell how Google will react to the latest wave of link spam, although given their history, it appears that the links in question could be devalued. A case about search results in the UK last year suggests that Google does take an active approach to monitoring specific keyword phrases, although with the quantity of design-related link spam, it probably won’t happen soon enough. 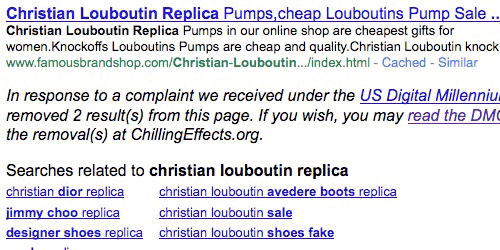 Google occasionally removes offending pages, although it’s rare to see it in service-based industries like web design. The ideal way to get good search results is by focusing on your products and hope that they’re good enough to gain organic links from high-ranking, reputable websites that deal with web design topics; but with the current situation, it seems even that isn’t enough.