Who Still Uses Windows XP? (Or Why Ohio is Totally Doomed)

By Dan Shaffer  ~ 3 minutes to read
Dan is a marketer for WebFX who likes everything tech, marketing, and startups. Follow him on Twitter @ShafferDan.

As you may already know, support for Windows XP has officially ended today, April 8, 2014. This has spurred a frantic rush to update PCs all around the world as many banks, hospitals, and other businesses maintained their use of this popular operating system for over 10 years. But like any other important update, there are some stragglers who haven’t quite taken notice. At WebFX, we like numbers.

In fact, we have access to over 1500 Google Analytics profiles that allow us to see lots of numbers. This week’s buzz about the death of Windows XP (RIP) made us wonder: who is still using this? By analyzing more than 7.8 million web visits since January 1, 2014, we have compiled the percentage of each state that is still operating and surfing the web from Windows XP. 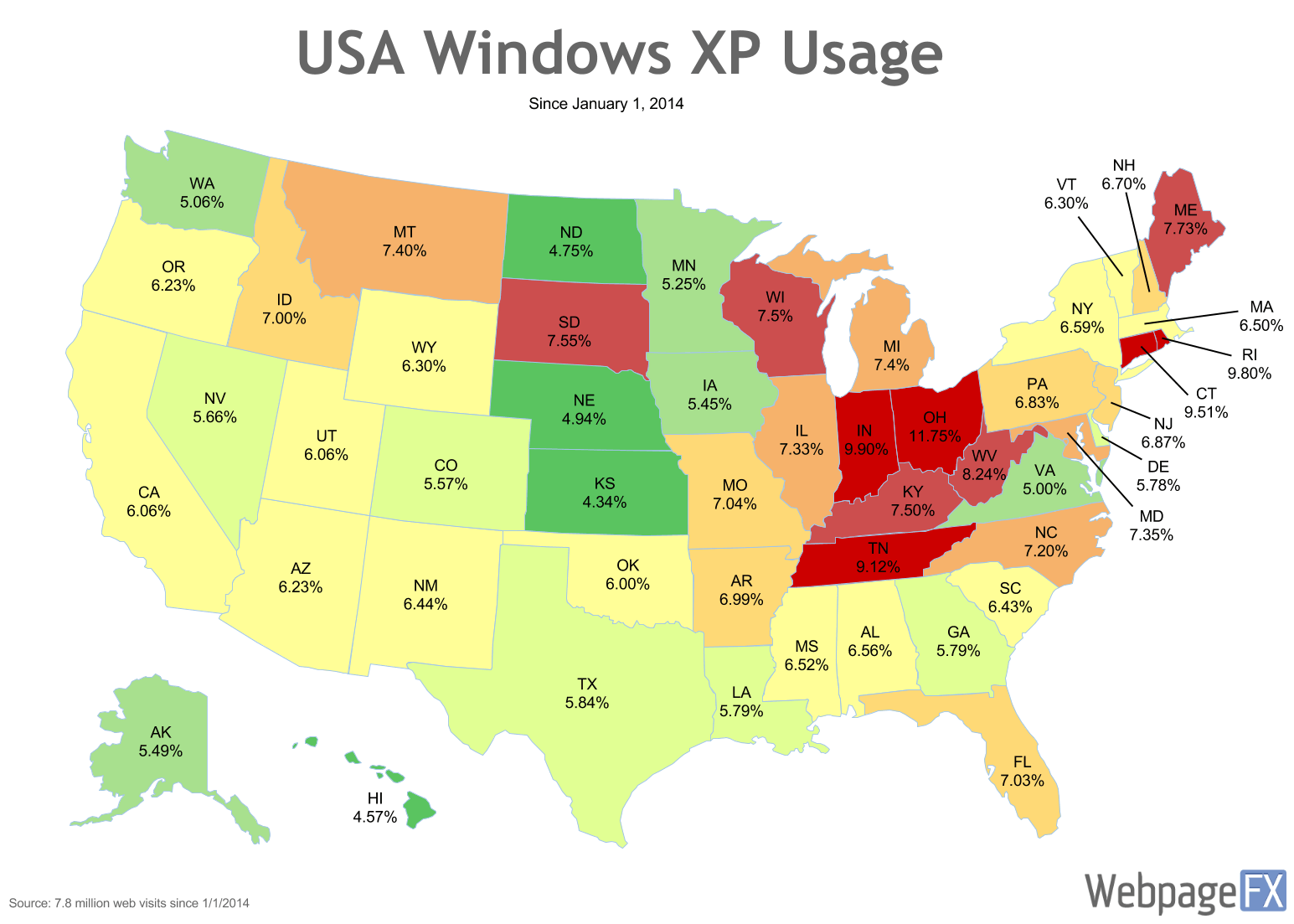 Ohio takes the lead with a whopping 11.75% of the state still using XP. In fact, this brings up an interesting comparison between XP use and the United States of Search: the “rust belt” seems to be a bit less tech savvy than the rest of us in states like Hawaii or Virginia. The United States overall shows improvement with only a 7.07% average of XP users today.

While that is much better than Ohio, it still isn’t the best.

The interesting part about this graphic is that our source comes from the most vulnerable area for attacks after today: the Internet. As this data is measured from website visits, you should be very concerned that over 10% of Ohio is still using XP for surfing the web and reading emails.

These are the individuals who will be targeted by hackers and security breaches after support runs out.

Over 7% of the country is using an unsupported operating system to access the Internet. While that may sound like a little puny, insignificant number, you still have to keep something in mind.

Viruses are passed around. As long as a hacker can find a route to your information, you are a sitting duck. The easiest route for hackers to take after April 8th?

Windows XP. Keep in mind that this is a mere sampling of the total population. Hopefully these web visits aren’t coming from institutions like your small town banks and other places that require high security.

And hopefully some of these individuals have kicked their butt into gear to update their operating systems since we pulled this data in January.

Here is the data presented above in table format:

If you found this data interesting, please share and pass it along! Similar data sets are also available in our United States of Search and a State by State Look at Who Controls the Internet posts.