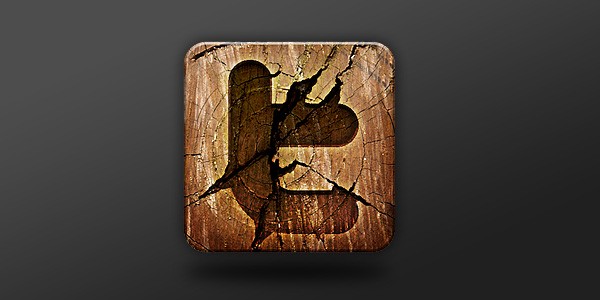 Step 1: Set Up the Photoshop Canvas

I like working with a canvas that is larger than the final product, so I created the canvas at about 510x510px. I set up Photoshop guides (View > New Guide) for the outer border of the icon. In addition, I also placed a horizontal guide and a vertical guide at the center of the canvas in order to have an idea of where the center is (and conveniently, let items snap to them in place).

I also threw in a simple black-to-gray gradient background to make it easier to see my work. 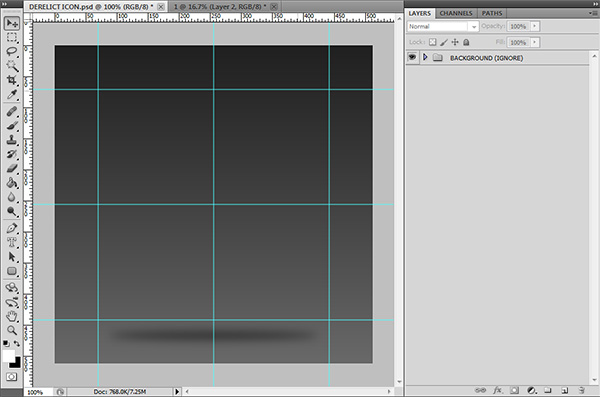 Step 2: Getting Ready for Icon Building

Time to get started! Create a layer group for your icon by choosing Layer > New > Group or clicking the “folder” icon at the bottom of the Layers Panel.

This will create a folder in the Layers Panel that can hold multiple layers; by default, this first layer group will automatically be named “Group 1.” I’ve renamed this group to “DERELICT ICON.” Create a new layer within that group for the icon’s base shape. Use the Rounded Rectangle Tool (U), with the Radius option set to 40px and the Fill pixels option chosen so that it draws the shape in the new layer, to draw a rounded rectangle within the outer guides. In our example, the size of the rounded rectangle shape is 370x370px. 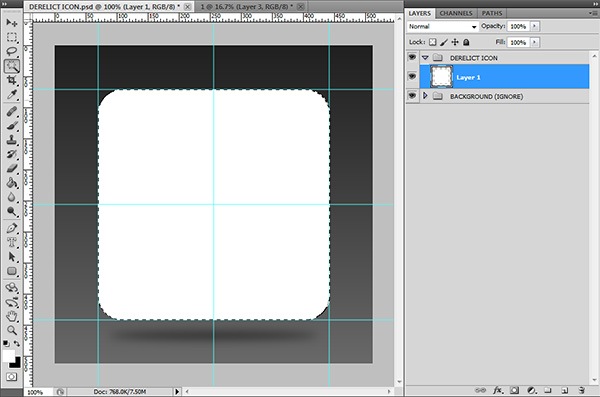 We now need to use the rounded rectangle shape to create a mask on the layer group. First, use the Magic Wand Tool (W) to create a selection around the rectangle.

From there, select the folder in the Layers Panel and then click on the Add layer mask button (it looks like a white circle inside of a gray rectangle) located at the bottom of the Layers Panel. 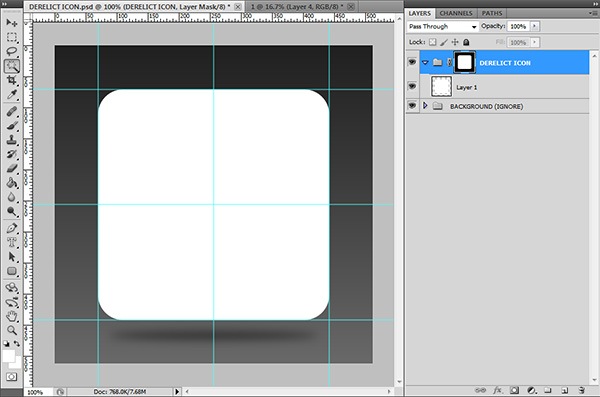 This will ensure that all layers within the folder is kept nicely within the rounded rectangle you made. And better yet, if you want to change that rectangle later on, you’ll be able to do so easily.

You can turn off the white rectangle layer for now, as you’ll need it later.

Find an image of a good tree stump; some image where the cracks (the technical term of these cracks are “scars”) originate from the center and flow outwards. Don’t settle on the first image that you cross; make sure you find one you’re willing to spend a bit of time on.

Here are some options (from Six Revisions):

Once you have that image, paste it right into your canvas, making sure it goes inside the layer group we created so that it is affected by our layer group’s mask. Resize the image using Free Transform (Ctrl/Cmd + T) to fit your needs. The layer mask you created before will conveniently keep everything nice and tidy within the rectangle.

I’ve gone ahead and added a Gradient Overlay layer effect, whereby the Blend Mode option is set to Soft Light. 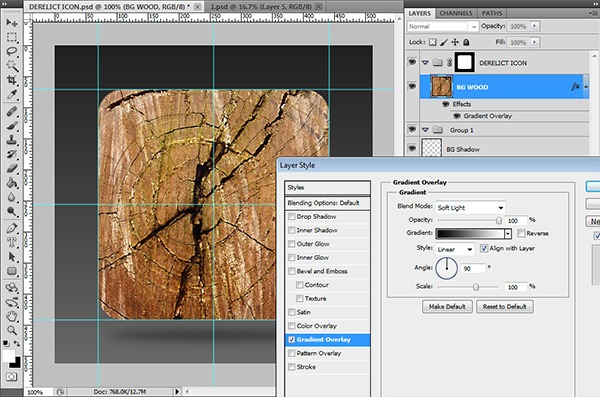 This step is quite straightforward. All you want to do is find a nice high-resolution outline of your logo (maybe try a Google Image search).

It doesn’t matter if the inside is textured as long as the outline is not soft, but rather, hard and crisp. If not, then try seeing if you can correct the sharpness of the edges by using the Sharpen filters (Filter > Sharpen) or experimenting with the layer’s Blend Mode. Paste your social media logo as a new layer into our work and resize it to fit the rectangle.

We’re slowly getting to the meat of the design, good job getting to this point! Before giving the logo all the various style bits, first change the Fill of its layer to 0% (you’ll see the Fill slider right below the Opacity slider at the top of the Layers Panel).

Next, you’ll want to customize the layer style. Double-click on the layer to access the Layer Styles dialog window. Then apply the following layer effects: 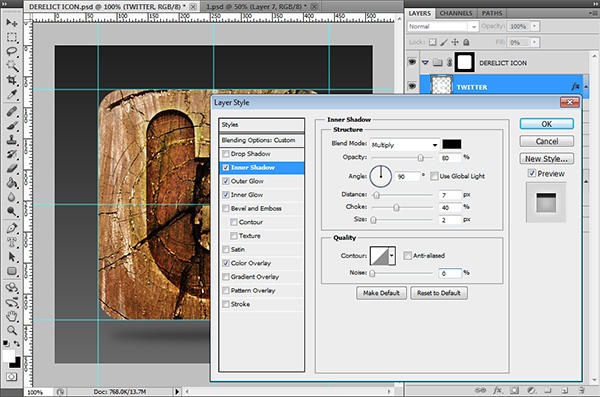 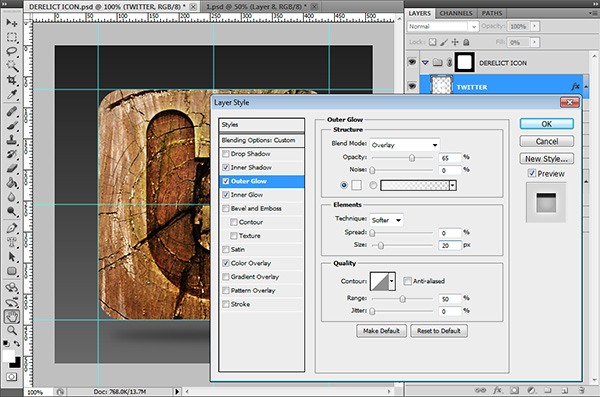 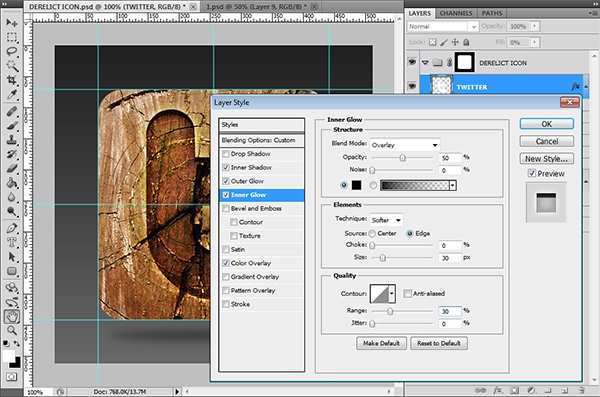 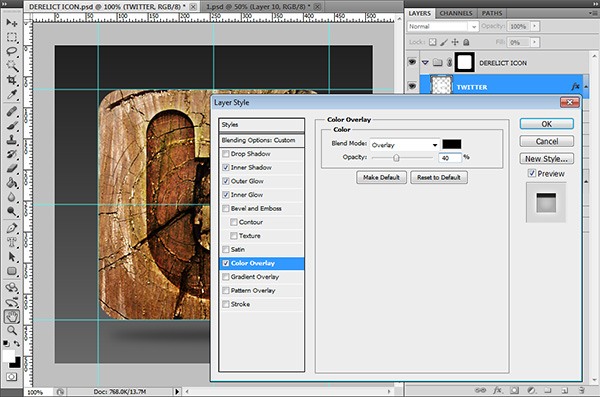 Step 6: Paint on the Scars

This is the part of the tutorial where you’ll need to get creative with your design.

Staying on your Social Media Logo layer, take a small circular or rectangular brush of your choosing (Size: 8-16px) and set it to have some good Hardness value (90%+ is good). Although it doesn’t matter what color you use, I’ve used white just so you can see my brush strokes. Start painting by following the scars in the wood.

You’ll see in the following image at the bottom-left how I’ve done this with one of the scars, keeping it smooth and always a little larger than the scar itself. 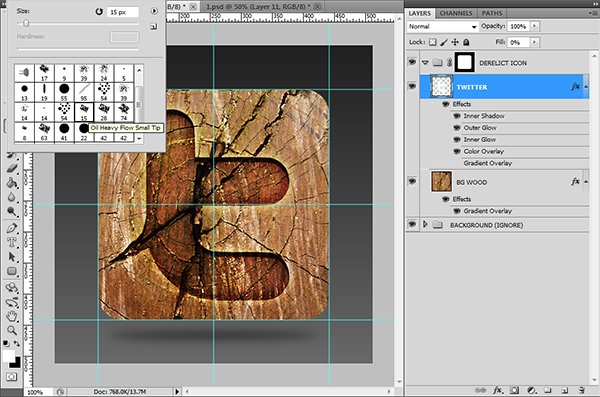 If you’re still not following along, here is the exact same layer, but having changed the Fill back to a 100% for the sake of illustration. 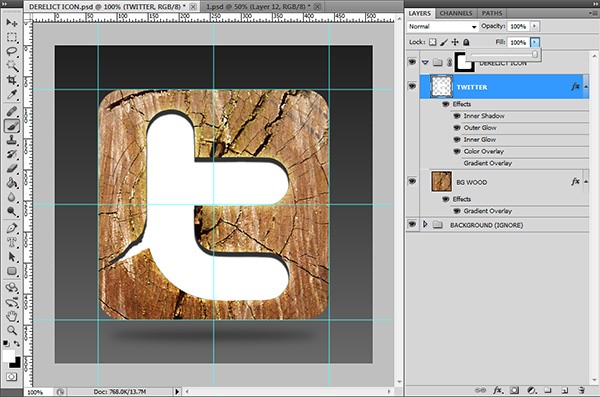 Now continue expanding on the icon until you’ve got an icon that you feel looks like it’s been “cut out” of the wood and then further degraded — that is the feeling you are looking for.

Here’s what I ended up with: 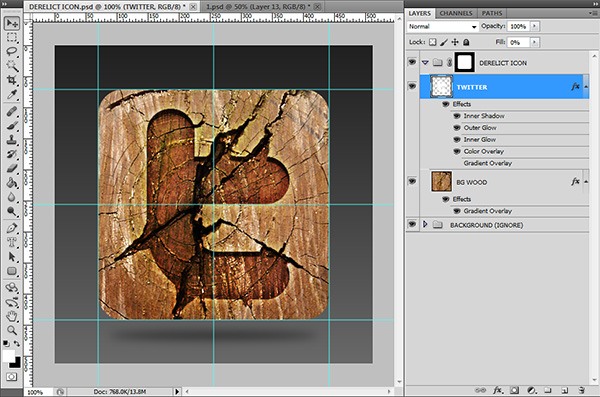 Step 7: Add Depth to the Logo

To further persuade the viewer of the connection between the logo and the scars, we’ll want to add some more depth to the piece. We do this by first duplicating the Social Media Logo layer (Ctrl/Cmd + J) and then removing its current layer style (right-click on the layer and choose Clear Layer Style). 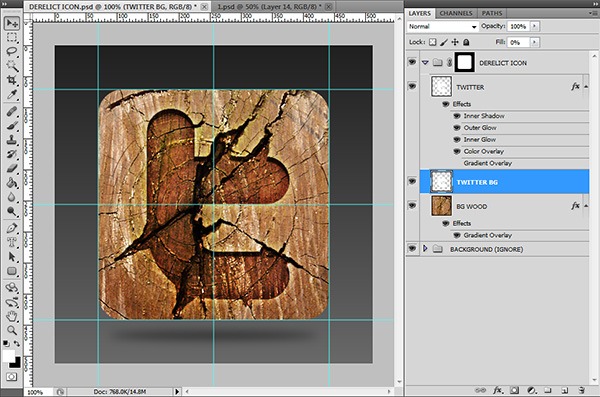 With this blank slate, we’ll then give the duplicated layer a new style, only this time, we will be using the Gradient Overlay layer effect in an inverted manner to the one we did last.

This gives our work a nice contrasting effect and depth. 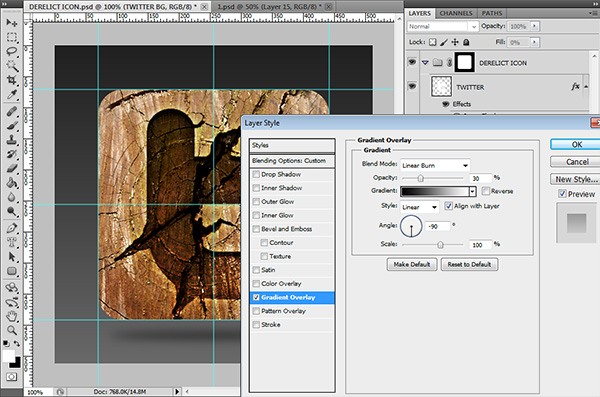 Step 8: Giving It the Final Polish

Before we are ready to use our icon, we’ll need to give it one last beauty pass to make sure it’s packing enough “punch.” Drag the original white rectangle layer from Step 2 to the top of your layer group’s stack. Create a layer style for it with these effects: 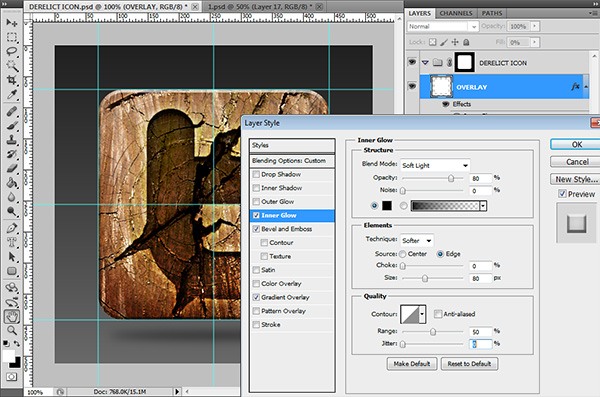 This layer effect will give it a button look. 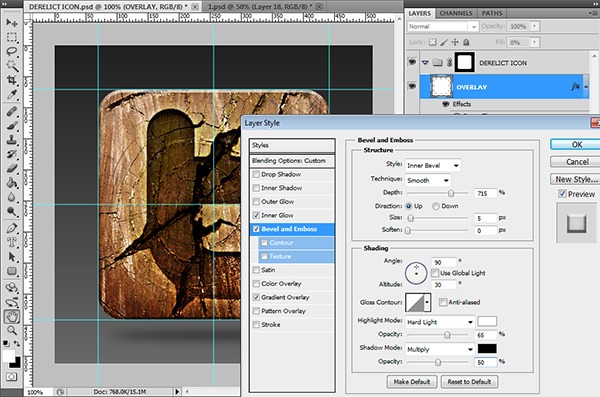 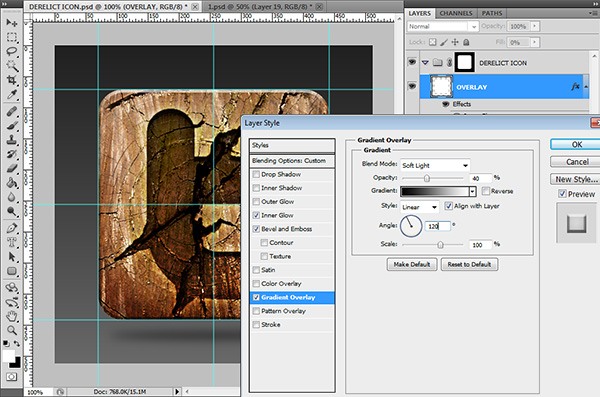 The resulting look is one with strong contrast, good lighting and a well-balanced feel (which is needed for any icon set). 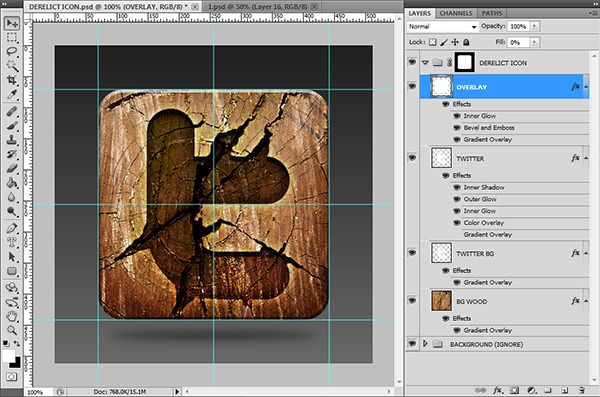 The last thing I did was to give the entire design a color boost.

The final result is a grungy wooden Twitter social media icon that feels older than the Internet itself (which is what I wanted to achieve). 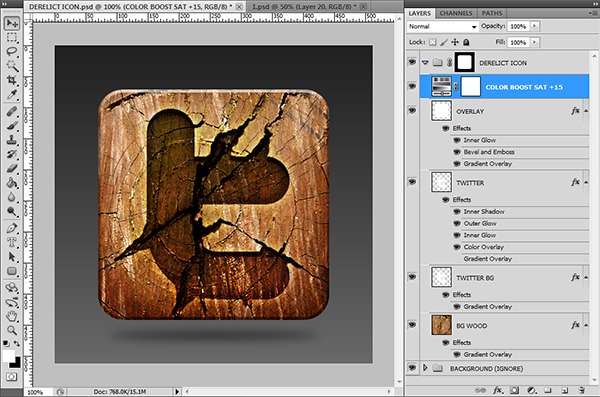 Last but not least, the biggest thing I’d want you to take away from this tutorial is not to stop here, but keep exploring other ideas. I had a look through one of my PSD scrap folders in my computer and found these other ideas that I had also brainstormed at the time.

Just design away, and most of all: Have fun!

This tutorial showed you a quick and easy way to design a grungy, wooden social media icon using fundamental design techniques in Photoshop. Thank you for following along with this tutorial.