How to Quickly Get Started with Git

A basic understanding of version control has become a necessity for everyone working with code, no matter if you’re a software developer, a web designer, or even a graphics designer who has to work with developers in a team. Apart from the have-to-know aspect, however, there are also a number of reasons why you should want to use a version control system (VCS).

Why You Want to Use a Version Control System

Version control makes collaboration in a team easier. Without a version control system, everybody on the team is probably working on the same shared set of files. It’s only a matter of time until someone overwrites someone else’s changes.

Also, a VCS takes care of combining changes from different people into one common version. In version control nomenclature, this is called merging. As a result, working on the same files simultaneously becomes safe and easy.

But even when you’re working on your own, a VCS still has plenty of benefits. For example, version control makes storing and restoring versions of your project a lot easier. Without a VCS, you’re probably saving versions of your files and folders using your own adventurous naming scheme, resulting in a horrifically unmanageable number of files and folders with file names like website-relaunch-homepage_2013-10-11_v3_JenniferSmith.html.

With a VCS in place, you only have a single project folder on your disk. All other versions and variants are safely stored in your version control system’s database, neatly described, and ready to be restored any time you want them. Last but not least, one of the best aspects about using a VCS is that it serves as documentation, and also helps promote the act of documentation.

Since each major change is wrapped in a commit (more about this term later), and each commit is described with a message, you can very easily follow along and understand the incremental changes in a project. This becomes even more useful when problems arise and you have to find out where they originated.

Why You Should Use Git 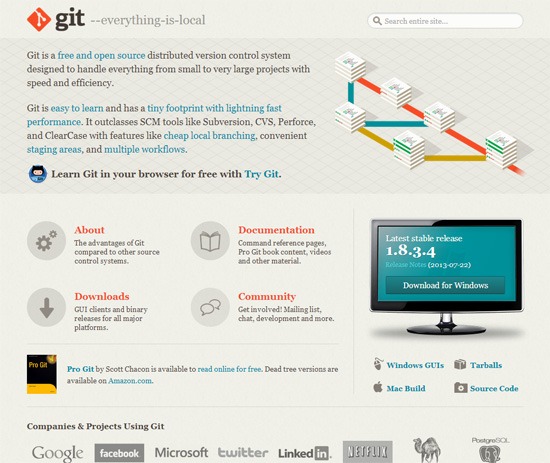 Another big advantage of Git is its superior branching management. Although other version control systems also know the concept of branches, Git was really built around it, and thus it provides a super-fast and easy branching experience. Once understood, making use of this concept can really take code quality to another level.

Other concepts, like the Staging Area or the Stash, also contribute to making Git a very useful part of your coding tool belt. When choosing any tool, you should also keep another factor in mind: Popularity. A tool without adoption in the market, without a community, is most often badly documented, can’t be integrated with other systems, and is not sure to survive in the long run.

Git has already arrived in the mainstream. With projects like the Linux kernel, Ruby on Rails, jQuery, and many other major open source projects, as well as big companies (such as Google, Facebook, and Twitter) using it, both of Git’s quality and its longevity are proven.

Installing Git has become incredibly easy in recent times (lucky you!). There are one-click installers for both Mac and Windows. To follow along with this guide, please install Git on your computer first.

Also, having our free Git cheat sheet handy will be useful before we begin delving into Git. With the Git cheat sheet, you don’t have to remember all the Git commands by heart, and it will allow you to deviate from this guide and explore Git on your own.

After completing the Git installation, it’s time to fire up your command line.

Two basic configurations should be made before you get started: Your name and your email. To set your name and email, issue the two following Git commands, but modify them so that you’re using your own name and your own email address:

There are two ways to start working on a project with version control: cloning an existing repository and creating a new repository.

When you’re getting on board of a project that’s already running with a version control system, you were probably provided with a URL to the project’s repository on a remote server. What’s a repository? A repository is just a fancy term for a project’s set of files and folders.

For example, check out jQuery’s repository on GitHub: 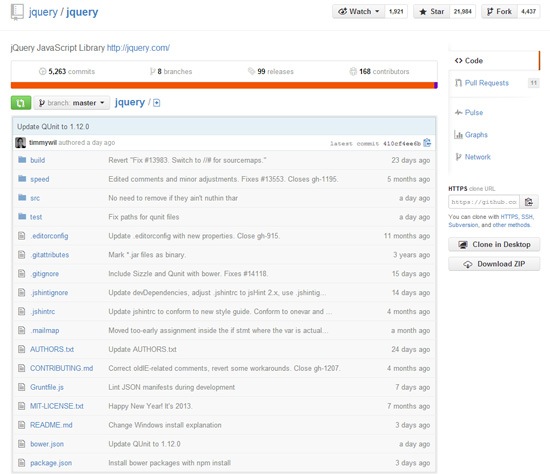 To get a copy of a project’s repository on your local computer, use the git clone command, like this:

The other possibility to getting started with version control is when you already have an existing project that is currently not under version control yet. Navigate into the project’s root folder with the command line, and then use the git init command to start versioning this project:

Verifying the Presence the .git Folder

You might be wondering where Git stores all the data about your repository. In both scenarios that I talked about — cloning an existing repository or creating a new repository — you should now have a hidden folder inside your project’s root folder. That folder is your local Git repository, and that folder’s name is .git.

You can verify this by issuing the ls Unix command like this:

Knowing that this folder exists is more than enough. You should not touch anything inside this magical folder.

Working on Your Files

When working on your project’s files, you’ll have a great deal of peace of mind, and it will help liberate your creative and experimental thinking. You don’t have to be fearful any longer about making changes to your files: modify, delete, add, copy, rename, or move them using whatever application you prefer (such as your favorite editor, a file browser, etc.). Git will allow you to undo changes when necessary, and it won’t affect anyone else working on the same file.

It’s only when you feel you’ve reached a noteworthy state that you have to mind version control again. At this point, when you have reached a good stage in your work, it’s time to wrap up your changes in a commit. A commit just means submitting the changes you’ve made to your files, to your repository.

Get an Overview of the Changes You’ve Made

My recommendation and a good practice: As the first step to making a commit, give yourself an overview of what you’ve changed. You can easily see an overview of your changes with the git status command: 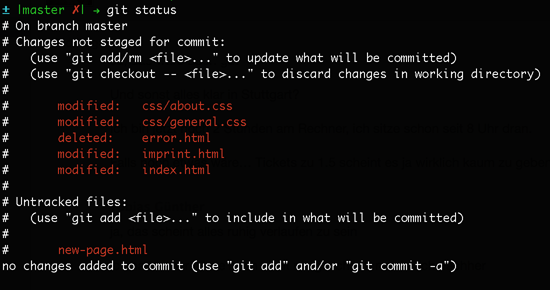 Now is the time to mark the changes you want to wrap up in the next commit. In Git lingo, this process means you’re staging your changes. How do you stage your changes?

From our working example above, here’s how you would stage the index.html file (which was modified), the new-page.html file (which is untracked), and the two modified files in the css folder:

Here’s the command confirming that you’d like to delete the error.html file:

If you look at the output of the git status command from our working example above, you’ll see that, additionally, the imprint.html file was modified. I deliberately didn’t stage it with the git add command, because I want to leave it for a later commit.

Review Before the Commit

Again, I suggest taking a look at what git status tells you before finally making the commit. Here’s the output of our working example now, after I’ve staged the files I want to commit: 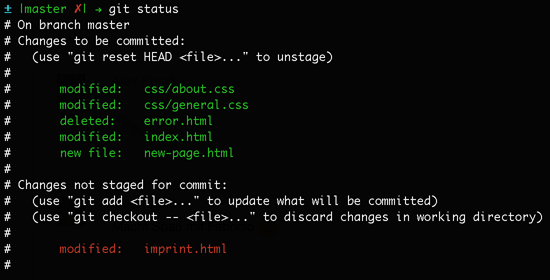 The Changes to be committed paragraph informs you about what you just staged.

To save this set of changes in a commit, you only have to use the git commit command with a good, descriptive message that tells you and others what the commit is about, right after the -m option, like this:

If you want to see what happened in the project so far, you can get an overview with the git log command:

This Git command lists all recorded commits in chronological order. 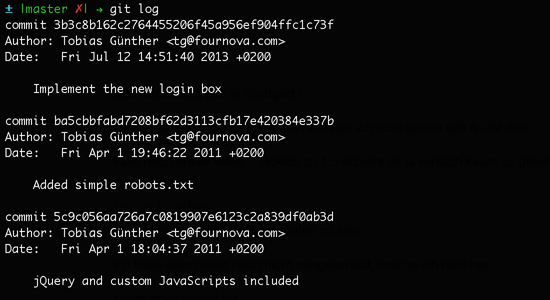 Your Next Steps to Git Mastery

Congratulations! By now, you’ve already grasped the most important concepts of version control and Git. To get your Git knowledge to the next level, I suggest the following steps.

A lot of tasks can be performed easier and more comfortably using a desktop client application, let alone not having to memorize all of the commands and parameters. Windows users might want to have a look at Tortoise Git, while Mac OS users can give Tower a try, the Git desktop client my team and I have created to make Git easier to use. 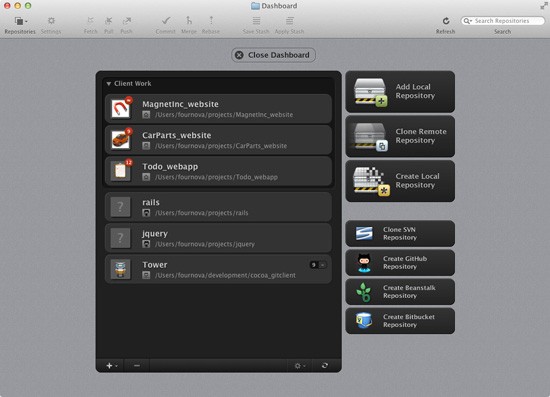 In recent years, the amount of documentation, tutorials, and articles on Git has increased a ton. Read these resources to become better at using Git:

Version control has become an integral part in the modern developer’s workflow. While version control used to be a chore in the past, systems like Git not only makes version control dead-simple, but also provides a lot of other workflow benefits.