One of the first things you may want to know about content marketing is “is it just a fad?” Or you may be asking “what’s the real ROI?” After all, it doesn’t sound like it makes sense. How could writing blog posts or giving away free guides increase sales?

Content marketing really is as effective as it claims to be. In fact, a poll by the Content Council revealed that 72% of marketers think branded content marketing is more effective than advertising in a magazine, and 62% think it’s better than a TV ad.

To better understand how content marketing works, and how it increases sales, let’s take a look at the marketing sales funnel.

As you probably already know, it’s unlikely that visitors to your site will make a purchase, fill out a contact form, or make any kind of investment in your business or brand at their first visit. Visitors often follow a conversion funnel, and the reality of this funnel is that many of those who enter it don’t reach the bottom.

A typical sales funnel may have a few stages, and external “triggers” that move them through each stage. Typically, funnels are thought to have three pre-conversion stages: top of funnel (TOFU), middle of funnel (MOFU), and bottom of funnel (BOFU). What causes someone to go from the TOFU stage to the MOFU stage—or leave the funnel without progressing—likely depends on some kind of external factor.

Let’s look at a real example. In the early 20th century, Jell-O’s goal was to promote grocery store sales of its flavored gelatin. The company had already launched a few early magazine advertisements, but sales were in the $250,000 range, and they were aiming to break $1 million. What could they do to move more TOFU shoppers – those who had seen the ads, but weren’t interested in enough to learn more about this new, unusual product – to BOFU ones?

When Jello-O launched its free recipe book, it had the answer. The recipe book served as the necessary step between first contact (or “brand awareness”), education, and motivation to make a purchase. After the book was distributed, Jell-O’s content-assisted funnel probably looked something like this:

As you can see, the existence of the recipe book itself isn’t necessarily what motivated grocery store shoppers to make a purchase. There was still some kind of external factor that influenced the final decision—that is, the reader’s need for Jell-O due to a party where they’d been asked to bring a dessert. However, without the recipe book, the customer may have never gone beyond the initial awareness stage, and the purchase wouldn’t have happened.

As we already mentioned, after two years and several million copies of Jell-O’s recipe book being distributed, the company’s sales had gone over the $1 million dollar mark. This is because a necessary gap in Jell-O’s sales funnel was filled, and content was exactly what the company needed to fill it in.

Ready for a more modern example? Let’s say you are the owner of a brand new ecommerce company selling high-end women’s clothing. You might expect visitors to your website to only need one or two “touches” to convince them to make a purchase, but this may not necessarily be true. What if the woman visiting your website doesn’t actually need new clothing at the moment, but is just browsing around through different stores? What if she’s very selective about what she purchases, and wants to be absolutely certain that your dress slacks are the right fit for her?

You could attempt to draw her in and re-engage her by using a sales funnel that looked like this:

... or you could use content marketing to model your sales funnel in this way instead:

Depending on the shopper, one or both of these funnel models may work just fine to convince her to buy a pair of dress pants from your store. However, there is one big difference between the two: cost.

According to a report by HubSpot, the average cost per lead in organizations that used primarily outbound marketing tactics—like ads, commercials, and direct mail—was approximately $346. For organizations using primarily inbound marketing tactics—including content marketing, email marketing, SEO, and social media—the average cost per lead was around $135, or 61% less. 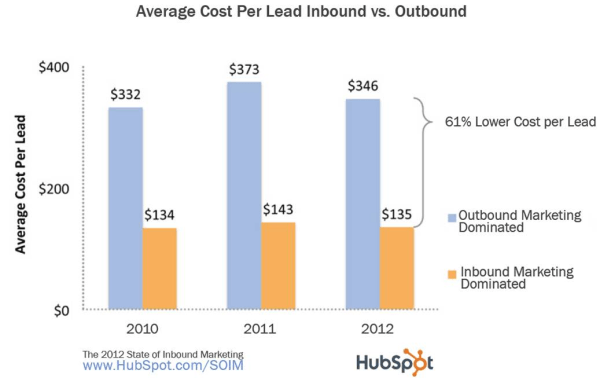 Considering the two sales funnel examples offered above, it’s true that either might convince a potential customer to make a purchase from your store, fill out a contact form, or otherwise make a decision to work with your business. However, if you could achieve the same results at around one-third of the cost of traditional marketing activities, just by swapping out some pieces of your funnel for content marketing, why wouldn’t you?

The reduced lead acquisition cost isn’t the only way that an organization can benefit from content marketing. According to the Content Council, seven out of ten consumers like online content because it is tailored to their interests. Additionally, seven out of ten consumers say they prefer to learn about a company through articles instead of advertising, which makes it clear that preferences have shifted away from traditional outbound advertising and toward content marketing.

It isn’t just consumers that prefer content marketing, though. An infographic by Content+ states that blogs can give businesses approximately 434% more indexed pages and 97% more links than those who do not have a blog. The more high quality pages and links you have, the more likely you are to rank well on Google and other search engines—meaning that utilizing a blog as part of your content marketing program can potentially improve your ranking in ways that other SEO methods simply can’t.

So, to answer the question “why use content marketing?” we’ll say this: content marketing gives businesses a way to more reliably reach potential customers at a lower cost than other activities, and can fill in gaps in the sales funnel to increase the likelihood of purchases when external factors are met.

To be clear, content marketing is not a magic bullet. Adding a blog to your website won’t automatically increase your leads or boost your sales. It takes hard work, dedication, and time to craft a content marketing program that fits your business and motivates your customers to take action.

Additionally, there will always be external factors outside of your control that may cause a customer to leave the sales funnel – like a lack of budget, a business owner’s decision to go elsewhere, or a change in plans. But when those external factors work in your favor, content marketing can act as the initial introduction to your company, and save you money over other top of funnel marketing activities that may have once served in its place.

Now that we’ve covered the advantages to using content marketing, let’s move on to talk about the types of content that you can utilize as part of a content marketing program, and give some examples of how they can be used to promote your business and grow your sales online. 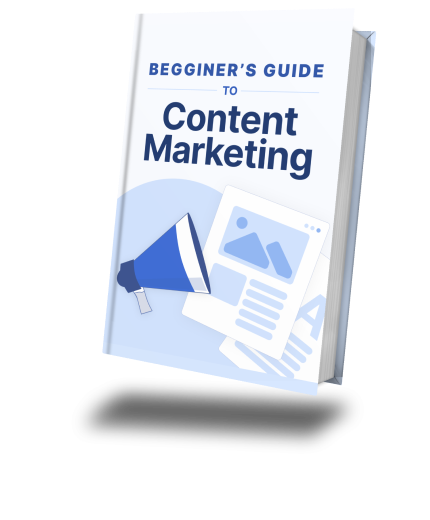