The idea of subliminal messaging has been widely used in popular culture. In an episode of Saved By the Bell, the character Zack uses it to get a date for the school dance, while an episode of The X-Files features it being used in a conspiracy to encourage murder in a small town.

Because of these plotlines in popular film and television media, you’ve probably heard of subliminal messaging before. But have you ever heard about it being used in real-world advertising? It’s rarely as exaggerated as in TV shows, but subliminal advertising exists.

At this point, you may wonder what subliminal advertising is, as well as whether or not you can — or should — use it in your marketing. To find the answers to these questions, just keep reading.

Then subscribe to Revenue Weekly — our email newsletter — to receive more digital marketing tips from the agency with over 25 years of experience!

What is subliminal advertising?

For instance, you might include a particular logo, symbol, or word somewhere in a photograph. A viewer won’t consciously notice the symbol, but their brain will subconsciously process it, making them more prone to engage with whatever that word or symbol represents.

While it’s often portrayed as malicious in exaggerated TV plots, it’s not inherently that way in real life. Often, it’s a fairly standard marketing tactic. For instance, it’s particularly common in company logos, causing people to associate a particular idea with the brand every time they see its name.

Wondering what subliminal marketing looks like in practice? Here are five real-world examples of subliminal advertising in action!

One of the first (and most well-known) examples of subliminal marketing is Amazon’s brand logo. The majority of the logo simply consists of the word “Amazon,” but beneath the letters is a yellow arrow moving from left to right.

On one level, the arrow is simply an arrow — it suggests the phrase “from a to z” because it moves between those two letters in Amazon’s name. But there’s also a different, subliminal message included there: The arrow resembles a smile, causing viewers to associate Amazon with positive emotions.

In recent years, Amazon has actually started being less subtle with this message, going so far as to deliberately depict the arrow as a smile in some of their ads. They even have a charity-based URL structure known as smile.amazon.com. 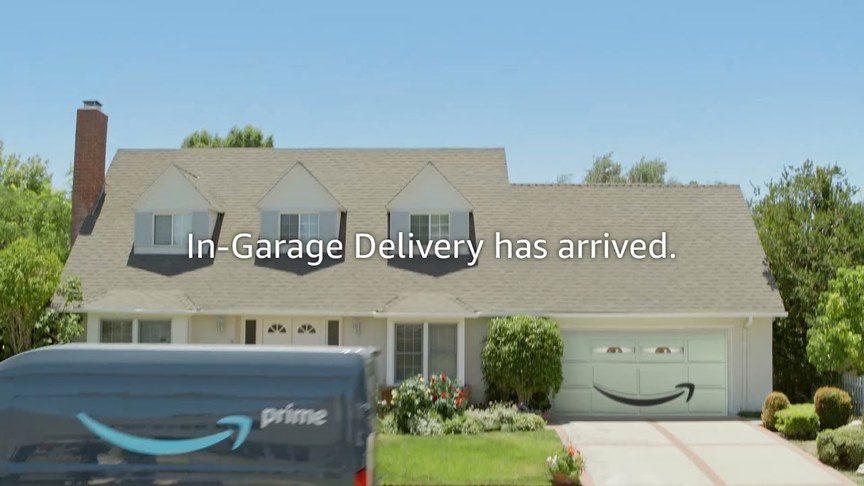 Another example of subliminal messaging in brand logos is Tostitos. If you aren’t familiar with this brand, Tostitos sells various kinds of tortilla chips and dip. Their commercials commonly feature happy gatherings of people who will share a bowl of salsa for their Tostitos chips.

But you don’t have to watch their commercials to see that imagery. It’s right in their logo — if you know to look for it, you can spot the fact that the two “t’s” in the middle of the word are formatted to look like stick people holding a chip, while the dot above the “i” looks like a bowl of salsa.

It’s hard to notice if you don’t know it’s there, but simply by looking at the logo, your subconscious mind still likely makes the connection between Tostitos and happy gatherings.

Our next example of subliminal messaging is in yet another logo, this one from FedEx. If you pay attention, you’ll notice that the FedEx logo features an arrow created by the negative space between the “E” and the “X” at the end of the logo.

The arrow represents the fact that FedEx transports goods from one location to another, and is intended to signify that they do it quickly.

This is one of the more subtle examples of subliminal advertising on the list, but in many ways that makes it more effective, since people don’t even realize they’re making the connection between FedEx and fast delivery.

Disney isn’t best known for its subtlety — most of its advertising features bright colors and flashy visuals. But that doesn’t mean it can’t use subliminal messaging when it chooses.

The Pirates of the Caribbean logo — featuring a skull and two crossed items (swords, torches, or bones) — has been noted to resemble Disney’s Mickey logo.

The skull forms the head and the two crossed items form the ears. Since Disney owns Pirates, this makes sense as a branding move.

There’s no official confirmation that this subliminal messaging was intentional, but considering Disney’s penchant for hiding Mickey logos around their theme parks, it doesn’t seem unlikely. If true, it’s a subtle but effective way of helping connect Pirates to Disney’s larger brand.

Our final subliminal advertising example is from Baskin-Robbins, again appearing in their main logo. The logo commonly appears as the initials “BR,” which are formatted in a particular font.

What you may not have noticed, though, is that the font forms the number 31 using pieces of the two letters. That number is a reference to Baskin-Robbins’ famous 31 flavors, originally used to promote the unprecedented ice cream flavor variety the company offered.

By referencing that number in the logo, Baskin-Robbins subtly reminds viewers of their flavor variety without even having to use the slogan itself.

Can you use subliminal messaging in your ads?

By this point, you might be wondering: Can you use subliminal marketing in your own ad campaigns? Moreover, should you?

There’s no simple answer to that question. In truth, a lot depends on how you go about it. One thing you’ll certainly want to avoid doing is communicating anything misleading. That could get you into legal trouble if anyone noticed it.

Even if something isn’t outright misleading, you still don’t want to do anything that will irritate users.

Most of the examples listed above simply involve graphic design choices in logos. Additionally, none of those logos show anything misleading, malicious, or inappropriate — just a smiley face, a Mickey head, or some people eating chips.

If you stick with innocent, non-misleading material, you can try out some subliminal messaging. However, if you’re worried about doing anything that could cause a legal issue, it’s best to talk to an attorney first.

Want to learn more digital advertising tips and tricks from the experts? Just subscribe to Revenue Weekly, our email newsletter! We’ve earned over 1,020 glowing testimonials from our clients, so you can rest assured we know marketing inside and out.

Sign up for our emails to start receiving more content right in your inbox. And if you’re interested in partnering with us for our digital marketing services, just call 888-601-5359 or contact us online today!

Previous post Conjoint Analysis: What Is It and How Can You Use It? Next post Buyer Personas: 3 Easy Steps to Create Customer Personas
TO TOP