6 Questions To Ask Before You Install A WordPress Plugin

WordPress plugins are great; they can save you time, speed up your website, improve SEO, manage memberships, and more. Plugins allow web designers and developers the ability to build sophisticated websites quicker and (possibly) better. With more than 20,000 plugins and over 330,000,000 downloads in the official WordPress plugin directory, there’s no question that plugins are an important component of the WordPress ecosystem.

But there’s a downside to using WordPress plugins. Relying too much on plugins can expose your site to an increasingly wide variety of risks. Let’s discuss the problem with plugins and things you should consider before installing one.

The Problem with Plugins

A WordPress site was running sluggishly and the client I was working with wasn’t sure why. He asked me to take a look.

So I logged in. I immediately noticed a significant delay in web page responsiveness. I went straight over to the list of plugins to confirm my suspicion of what could be the cause.

Sure enough, I saw a list of more than 40 active plugins!

A screenshot example of the Plugins Screen in the WordPress admin interface. Now, very importantly, the number of WordPress plugins is not the problem. While a high number of plugins increases the likelihood of difficulties, the plugin count itself isn’t the culprit.

Site speed issues that related to plugins is caused by things like poor development practices on the part of the plugin author. Here are two possible reasons why a WordPress plugin can slow down a site (and your WordPress speed optimization efforts):

Another major problem with poorly developed plugins is the potential for security vulnerabilities. There are few things worse than getting a call from a client about their site being hacked.

Here are some common security vulnerabilities in WordPress plugins:

Relying on a WordPress plugin over a long period of time can expose you to risks, including:

Questions to Ask Yourself before Installing a WordPress Plugin

Now that we’ve identified potential issues of using WordPress plugins, you might be thinking about evaluating whether you really need a plugin or not.

Below are some questions I suggest you ask before making a commitment to using a WordPress plugin.

Do I need this plugin?

When you’re searching through the WordPress plugin directory, the first thing to determine is whether or not there’s really a need for the plugin. Is this plugin critical to the site?

Finding out if you really need a plugin especially becomes important when you’re browsing the top plugins in the WordPress plugin directory because you might be tempted to install a plugin simply because many other sites seem use it too.

Can I do what I need without this plugin?

The idea of clicking the “Install” button and everything just working makes plugins highly attractive.

For non-developers, using a plugin for even the simplest functions might be necessary. However, if you’re a developer with good understanding of PHP, MySQL, web development best practices and a bit of time, writing your own code in WordPress’s functions.php might be a better option so that you can avoid dependencies on third-party plugins.

For example, searching for “Facebook Like” in the WordPress plugin directory returns over 700 results. If your only objective is to add a Facebook Like button on your WordPress posts, that’s easy to do: get the code from the official Facebook Developers docs, and then put it in the appropriate location in your theme’s single.php or functions.php.

Is this plugin better than another competing plugin?

The idea is to get a good list of options before you make a commitment to a particular plugin. Start by searching the plugin directory and putting together a quick list.

Do research on each, looking for reviews of each plugin online. Here are a few things to keep in mind when performing research on WordPress plugins:

Which plugin author has the most credibility? When you choose a plugin, you’re placing trust in its author. It’s important to have chosen an authority that has the strongest level of credibility.

Determining credibility can be difficult. A new developer on the scene may be the best choice, yet may lack the publicity and reputation of an older developer. There isn’t an exact science to answering this question, but here are some things to consider: Review the plugin’s activity. For plugins in the WordPress plugins directory, take a look at the ratio of support tickets answered over the past, say, two months to determine how responsive the developer is.

Here’s what the All in One SEO Pack plugin’s support forum page looks like:

You can quickly see how many tickets are resolved in the Topic column and when the last time a ticket was responded to in the Freshness column. For a premium plugin, look at their official support forums (if possible) and check how many of the questions are answered and how long a time period elapses between answers. Try to figure out why the developer created the plugin. What motivated them to do the initial work?

What’s motivating them to continue work on the plugin? The answer isn’t always obvious and the seemingly “obvious” answers can be wrong. Maybe it’s to scratch their own itch.

If it’s a spare-time hobby that the developer took on for fun and experimentation, you might be at risk of them falling disinterested in their project. If developing the plugin is a full-time endeavor (as is the case with some of the premium plugins) then the developer’s motive to continue development and support remains high. Determine, as best you can, the developer’s level of experience. Is this their first (or only) plugin?

What kind of work do they do for a living? Have they made contributions to WordPress core? Though experience is not the only measure of talent, many times, it’s a safe starting point.

Which plugin has the best update track record?

As you narrow down your list of plugins, consider the plugin’s update frequency.

For plugins hosted in the plugin directory, look at the Changelog tab to see notes on what was done with each update.

Also, Go to the Developers tab and look at the Development Log on Trac to see how much time has elapsed between updates. 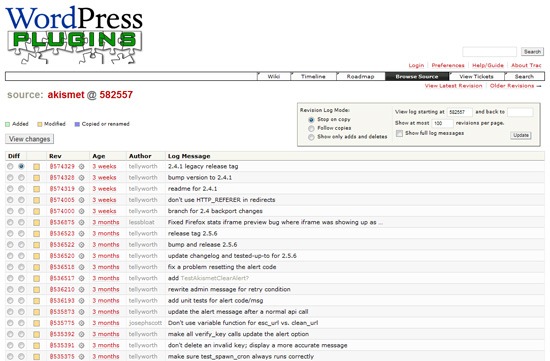 Akismet’s Development Log on Trac As you review this information, below are some things to consider looking at:

Which plugin has the most widespread adoption?

Consider the usage and recommendation of the plugin throughout the WordPress ecosystem.

How many downloads does it have? Who’s recommending it and why? What’s being said about the plugin?

As you ask those questions, keep in mind that the popularity of a plugin doesn’t automatically make it the best choice. While certainly a factor, weigh its popularity against the other answers to the other questions you’ve asked about the plugin’s author and update history. Be willing to go with a less popular (for now) plugin that has a solid developer behind it.

Plugins are important to WordPress.

But I recommend keeping your plugin use to a minimum and looking for ways to accomplish more with less. Share your thoughts about WordPress plugins in the comments!

Previous post 5 Scary Google Hacks (Or Why You Should Learn To Love robots.txt) Next post Free Icon Fonts for Web User Interfaces
TO TOP